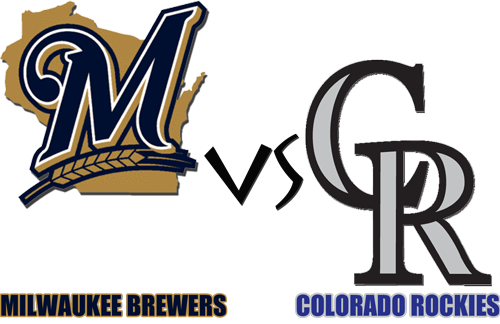 As the Brewersand Rockies get set to open their series at Miller Park tonight, Andrew Martin of Purple Row agreed to answer a few questions about the Rockies.

BCB: The Rockies are out to a 6-6 start on the season. How do you think they'll do in the West this year? Who do you see as the favorite in the division?

AM: This has been my copout all preseason, but it's so hard to try and project this team. The bats are gonna hit well enough - this lineup is good enough to swing in the NL West, but the pitching is a big question mark, which I'll touch on down the line. To answer the question, Arizona is still MY favorite in the division, and the Rockies could finish 2nd, 3rd, or 4th. It's gonna come down to health and that young pitching.

BCB: Troy Tulowitzki has gotten off to a tough start so far this year having already committed six errors. Is this just a small rough patch or have you noticed things that cause you concern?

AM: Tulodoes this every April. Not so much the defensive miscues, but the "trying to do everything himself" style of play. It's absolutely infuriating. I do just think it's a rough patch, but a lot of us are scratching our heads as to what's going on with him. He sat on Wednesday night in the series finale. I think he needs to realize that this is a legit team (position players, anyhow), and he needs to trust his teammates. Just relax and play ball, Tulo.

Follow the jump to hear all about Jim Tracy and more!

BCB: In 2009, Jim Tracy took over an 18-28 squad and led them to the post-season. Since then, what have you liked the most about Tracy and what has frustrated you the most?

AM: Before I answer this, I'm speaking for myself here, and not necessarily for the entirety of Purple Row. Caveats and grainy salts and all that.

Tracy, when he came in, did what a good manager should do: have faith in his starting lineup, stick them out there every damn day come rain or shine and keep some semblance of continuity with the team. Once September hit and it became apparent that he was going to be extended, things suddenly changed. Players would be randomly benched. Bullpen "strategies" had us all throwing things at the television. And it hasn't stopped.

Tracy somehow managed to dodge the massive purge that the Rockies underwent this offseason. After a season where the Rockies were picked by almost everyone to take their first NL West title ever, they finished 73-89 in what might have been the most disappointing season in Rockies history.

Tracy clearly has an in with the Rockies ownership. They LIKE him, regardless of what the team is doing. I personally think he's lost the team in the same fashion that Clint Hurdle did at the beginning of 2009.

He's not accountable for crappy play, he throws his players under the bus, and I'm willing to say that his impatience with guys like Seth Smithand Ian Stewart was a big part of those guys getting shipped out of town. Not to say that Smith and Stewart were perfect role models of excellent professional baseball, but give me a break. Stewart has an 0fer day and doesn't see a start for 4 games past that. There's a line between "you earn your playing time" and "you have to give these guys the shot to swing their way out of it".

His selective ignoring of platoon splits in regards to bullpen decisions and who-starts-when is seemingly random. His practical refusal to bat guys like Chris Iannetta higher than 8th did damage to the lineup. Also, he subs out all the guys who need rest at the same time, putting a AAAA lineup on the field. We call those days "Sundays". The Rockies had a 17-game Sunday losing streak heading into August of 2011. Perhaps a MLB lineup could have fared better. You know, the one that's full of the guys sitting on the bench.

In short, I loathe the Rockies manager and am pretty sure that Jonah Hill using a set of Dungeons and Dragons multi-sided dice could make better managerial decisions. No, not Paul DePodesta, I mean actual Jonah Hill.

BCB: With his win on Tuesday, Jamie Moyer has been the feel-good story of the season so far but it sounds like starting pitching has been a concern for the Rockies (5.87 ERA, 1.67 WHIP, 5.54 FIP, 5.15 xFIP, 1:1 K/BB ratio). What do you think of Moyer being in the starting rotation? Do you think that the rotation will improve or will the bullpen need to eat a lot of innings this year?

AM: Moyer... well, if he's got it, he's got it. If not, we have depth. Moyermakingthe team was met with flak in that there are other younger guys who should be pitching those MLB innings. He's occupying a mentor/player role right now, similar to guys like Ramon Hernandez and Rafael Betancourt. However, when Jorge De La Rosa returns from the DL, if Moyer isn't shaking it, I see no reason why they couldn't just cut ties with him, whether by trade or release.

The issue is that our pitching is mostly young andinexperienced. Well, the depth anyhow. Moyer age jokes aside, him and Jeremy Guthrie are obviously the most experienced guys on the roster, and we're looking at a #3 pitcher as our #1 (sort of) and Moyer is the "best" pitcher on staff thus far. Jhoulys Chacin still has a lot of growth, and Juan Nicasio may not have much room to get better. Drew Pomeranz is still an ace in the making, but he's really young and doesn't have much pro baseball under his belt. Past that, we're looking at guys like Tyler Chatwood, Guillermo Moscoso, Alex White, and Christian Friedrich to take big steps and fill in rotation holes when they come. Those guys are going to be important parts of next year's team.

Thanks to Andrew for taking the time, and check out more of his work at Purple Row.