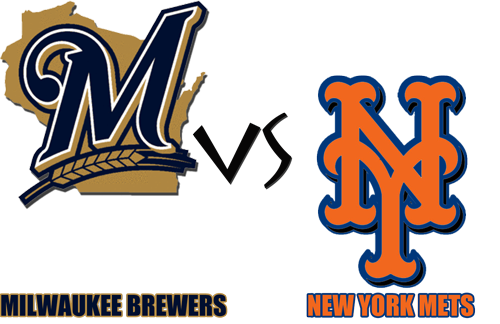 While the Brewers were on their way to Queens for a stay in New York that will probably last less than 48 hours, Steven Schreiber of Amazin' Avenue was kind enough to answer some questions about the Mets and this week's series. I also answered questions for them, which I'll link to once they're up.

BCB: David Wright entered play Sunday with eleven hits in his last four games (including four on Saturday), and is hitting .433/.521/.683 in his last 16 games. It's probably not a coincidence that the Mets are 10-6 in those games. Is he the biggest thing going right for this team right now?

AA: David Wright's excellent start to this season has been a huge reason as to why the Mets are playing so well thus far and yet, I don't think you can call him the biggest thing to go right for them. That award easily goes to Johan Santana, who has been nothing short of spectacular in his first seven starts of the year after missing all of 2011 due to shoulder surgery. Coming into the season, the expectations were so much lower for Santana, while Mets fans have mostly expected David Wright to still be one of the better third baseman in the league, with hope of a rebound towards his 2005-08 excellence. Of course, this should take nothing away from what Wright has done this year, as he seems to finally be rebounding to 05-08 form. He worked hard in the offseason to get back to what worked for him in his best years and he's seen a tremendous amount of improvement on both sides of the ball, to the point where Mets announcer Keith Hernandez stated during Sunday's game that Wright looks like a totally different player from a year ago. The last three seasons, his ballooning strikeout rate had been a major bugaboo but he's eliminated a lot of extra movement from his swing and that's allowed him to bring his strikeout rate down to a career best 13.5%. He's just making a ton of hard contact, which is reflected in his 27% line drive rate. So while his .450 BABIP will come down some, it's definitely more along the lines of "for real" than "fluke". A healthy, star-level David Wright was a huge key to this team being more than a 75ish win team this season and it's really good to see that the David Wright of old may finally be back.

BCB: Shortstop Ruben Tejada is also one of the Mets' most valuable players this season despite the fact that he's only 22 years old. Has his performance smoothed the transition away from the Jose Reyes era?

AA: It certainly has. Tejada is not flashy like Jose Reyes, he was never really all that hyped coming through the Mets system (possibly because he was rushed through the system and at times, was overmatched due to his youth) but he is really an impressive player. He's probably never going to be a star on the level of Reyes but he already seems to be close to an average regular, which at 22 years old, should portend to more growth down the line. Tejada does a lot of things very well. He plays solid defense, he's a tough out at the plate and he gets on base at around a league average clip. He's also heady in a way that Reyes just sometimes wasn't. Whereas Reyes often had the athleticism to make up for his mistakes at times, Tejada is a smart, heads-up ballplayer who doesn't make many mental errors, impressive for a player his age. All of that, along with Reyes' relatively slow start in Miami and the Mets' hot start, has shifted focus away from Jose's departure and that's certainly been a welcome development.

Now, Tejada is on the disabled list after straining his groin in Philadelphia last week, so you'll probably see Ronny Cedeno start at shortstop this series, who I'm sure you're familiar with from his days with the Cubs and Pirates. The Mets also have rookie middle infielder Jordany Valdespin on the roster, who had a breakout year at AA Binghamton last season but is still more of a raw, toolsy player (game-winning three run home run off of Jonathan Papelbon last week notwithstanding).

BCB: The Brewers are scheduled to face Miguel Batista Monday night. He's 41 years old, has a 5.89 ERA and 2.127 WHIP on the season and was bombed in one of his two starts. Is he really the Mets' best option to fill a spot at the end of the rotation?

AA: To be quite frank: no, he isn't the Mets' best option. He's probably about the fourth or fifth best option and that's after acknowledging that the team's starting pitching depth was pretty thin to begin with. The idea with Batista is to try to weather the storm for a little while until a better option (Chris Young or Jenrry Mejia, most likely) is ready. Young and Mejia are both rehabbing from injuries at the moment, so they both could be ready as soon as the end of this month. They also have righty Jeremy Hefner, who's been excellent at Buffalo, Chris Schwinden, who's also been solid in Buffalo but got rocked in his two start big league tryout and top prospects Matt Harvey and Jeurys Familia at Buffalo. Harvey and Familia are basically off-limits, though, so as not to interfere with their development. Perhaps Harvey gets a shot after the all-star break, if he's pitching really well and strung together a number of good starts but this front office won't call him up before then. Getting back to Batista, he has not been good at all and his 4 run, 5.1 inning outing last week was actually considered a "success" for some reason. With the way he's pitching and with Young and Mejia working their way back and Hefner continuing to pitch well in the minors, Batista hopefully shouldn't be long for this roster. But at the same time, it's kind of amazing how long he's already lasted. Basically, we're just crossing our fingers for Batista to be somewhat serviceable until the other options are ready. I think, if anything, it's really shown Mets fans how valuable Mike Pelfrey's ~200 innings and ~4.00 ERA were to this team at the back of the rotation. Pelfrey, who had Tommy John surgery a few weeks ago, became a sort of a punching bag for Mets fans, who just didn't realize that his mediocrity and stability were assets (you could basically set in stone a 4.45 xFIP for him every year).

BCB: Is center fielder Kirk Neuwenhuis the best player on this Mets team that many of us have probably never heard of?

AA: Trying to think of guys you haven't heard of, Nieuwenhuis is probably the best (I originally would've gone with Ruben Tejada but it looks like you've heard of him!). Kirk's always been an interesting prospect since he was drafted in the 3rd round of the '08 draft out of Azusa Pacific University in Los Angeles. Since he was drafted, he's improved at every level of the minor leagues and he's just a solid all-around player. He's got some power but it's not plus or elite power, he's got some speed but he's might only steal 20 bases at most, he strikes out a bit too much but still makes hard contact. Defensively, he played very well out in center field and he plays the game really hard, often laying out for catches and crashing into walls and that makes his defensive abilities play up a bit. In the minors, some prospect watchers tagged him with the "tweener/4th outfielder" label, as in he doesn't have enough power for a corner spot but also not enough defense ability to be a center fielder. Obviously, it's still very early but I think that is a little overblown and he could be a fine starter in center for a few years and a solid regular as a right fielder. Since Andres Torres has returned, he's played more in left field and in comparison with what Jason Bay has given the Mets over his first three seasons with the team, Nieuwenhuis is already a huge upgrade. He's also become quite popular with the fans in a short amount of time, since he's homegrown, he's gotten some big hits early on this season and like I said earlier, he plays really hard. And we all know that baseball fans love diving catches (or "Nieuwenheists", as some have started calling them)!

BCB: If the season had ended after Saturday's game the Mets (one of four above-.500 teams in the NL East) would have won the second Wild Card. Is this team good enough to stay in contention all season?

AA: It's tough to say, in part because this team is so young and unproven for the most part, that we don't really have a basis on how they'll perform. However, I think they are good enough to stay, at the least, in fringe contention for the second wild card for the better part of the summer. Certainly there are holes--the 5th starter in the rotation, the bullpen's been really shaky, Lucas Duda and Ike Davis haven't been nearly as good as we've hoped so far. But assuming they don't get hit too hard with injuries, the lineup is pretty solid from top to bottom. There isn't an automatic out in there and they all seem to have quality at-bats and get on base at a good clip. I'd put the front three of the rotation with Santana, R.A. Dickey and Jon Niese up against many other teams and not feel all that worried and Dillon Gee seems to be improving some as well. And they've shown a knack to come back late in games so far. Not sure if that's necessarily a repeatable skill all season but it certainly makes them fun to watch and dangerous in the late innings against opposing bullpens. Hopefully we'll see Ruben Tejada and Josh Thole return relatively soon from their injuries and hopefully they can find a reliable fifth starter in house. That, along with the bullpen getting straightened out, will go a long way towards deciding whether this team is the 75ish win team that many had them pegged to be this year or something more. Of course, while we'd love to see them continue to surprise us, most Mets fans had this year written off as another rebuilding season, with eyes on 2013 and more realistically, 2014 as the year when they should legitimately start to compete for the playoffs on a regular basis. With some young pitching prospects waiting in the wings (Harvey, Mejia, Familia and Zack Wheeler), the hope is to be able to put everything together in a year or two and then contend for a decade, rather than risking it all for one or two seasons, as the Mets have routinely done in the past.

Thanks again to Steven for taking the time, and don't forget to check out Amazin' Avenue for more on the Mets!