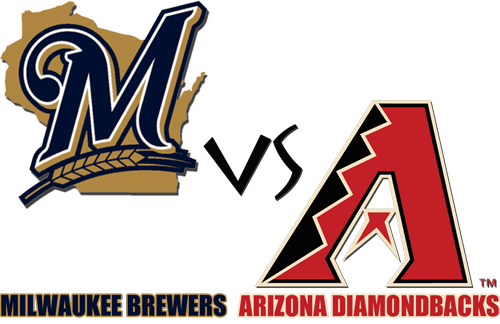 The Diamondbacks have been a pretty close mirror to the Brewers this year: Both teams had a way-better-than-expected 2011 and expected another strong, contending club this year. Instead, they've both experienced a perfect storm of injuries and underperformance in just about every area of the game, and find themselves floundering near the bottom of their divisions. I put a few questions about the state of the D-Backs to Zavada's Moustache of AZ Snake Pit, and he was kind enough to answer. Here's our exchange:

BCB: From an outsider's perspective, it seems as though the main culprit for the D-Backs' slow start is a significantly underperforming lineup (Jason Kubel and Chris Young excepted), something that's quite surprising after last year's strong performances. Do you see this team as just in a fluky slow start and primed for some positive regression, or are there some deeper causes for alarm going on?

ASP: The pitching certainly hasn't been great so far (team ERA of 4.23), but they've done a decent job of treading water while Daniel Hudson recovers from injury, and I think it's fair to say that the offense is the most disappointing part of the team right now. And to answer your question, I think there's a little of both at play right now. Justin Upton has probably gotten the most press for his struggles so far, just because he was such a demigod last year, but I feel confident he'll rebound. He's a notoriously streaky hitter, but he's almost too talented not to rebound. It's already started too, as he has put up a line of .450/.556/.650 over the past week.

The rest of the lineup I'm less sure about. Everyone was enamored with Paul Goldschmidt last year (I probably don't have to remind you guys about the NLDS grand slam), but he's struggled so far. The results haven't been there so far (OPS of .670) and he has simply looked lost at the plate for much of the season. His approach to hitting has looked much better recently though, and here's hoping his .917 OPS over his last six starts is a sign of legitimate improvement, rather than just a statistical blip. Of course, guys like Ryan Roberts and Gerardo Parra simply had career years in 2011, and they probably just won't reach that mark again in 2012.

More on the D-backs, after the jump.

BCB: Trevor Bauer continues to tear up the high minors, and many prospect nerds have been pushing for his callup pretty much ever since his professional career began. Are you as antsy as they are for the Bauer era to begin? Have you been happy with the team's decisions regarding the starting rotation this year?

ASP: Oh, believe me, we're excited about Bauer. He dominated Double-A and recently earned a promotion to Reno (Triple-A), so the thinking is it can't be long now before we see Trevor in Phoenix. The walks (28 in 56.1 minor league innings in 2012) are a concern, and he made some passive aggressive remarks on twitter that raised some eyebrows in the front office, but in general, we fans couldn't be much more antsy about his arrival.

The question is, who gets replaced to make room for him? As I mentioned above, the rotation has been universally "meh," but no one has pitched poorly enough to warrant an immediate demotion. With Hudson coming back, my guess is the team will try to let things shake out on their own. If someone starts pitching poorly or gets injured, up comes Bauer. But if not, I wouldn't be surprised if he stays in the minors until at least the trade deadline. It's not a bad problem to have.

BCB: The bullpen has been a relative bright spot for the team so far, though J.J. Putz has struggled a bit with the gopher ball and has an accordingly ballooning ERA. Still, his K/BB stats (16/1) are incredible and his .375 BABIP is bound for some regression. Has there been any desire to shift him out of the closer role, or are you confident things will even back out for him?

ASP: I'm writing this a day after the bullpen coughed up a five-run lead to the Dodgers, so I'm probably not at my most objective right now. Still, it doesn't feel like they've been a bright spot, and the stats bear that out, with the Diamondbacks' bullpen ranking in the bottom third for both ERA and FIP. It's probably not fair to expect them to be as good as they were last year, but they've already lost as many games this year when leading after the eighth inning (4) as they did all of last year, so the bullpen feels like a disappointment.

As for Putz, I'm still in the minority of fans who think he'll be fine. As you mentioned, his peripherals look solid, and he's currently dealing with a BABIP of .374, so chances are he'll improve heading forward. I wouldn't be against letting David Hernandez close, but I'd give Putz another week or so in the role to see if he bounces back.

BCB: Kirk Gibson reaped a ton of praise for his work last year in managing a much-better-than-expected D-Backs team. Have this year's results so far changed fans' opinions of him at all?

ASP: I'd say that it's less that people's perceptions of Gibson have changed, and more that this season has simply confirmed what many of us already believed. You can make a compelling case that the team won in spite of Gibson's tactics last year, rather than because of them, as his lineup structure and bullpen choices left a lot to be desired even when the team was winning. However, because the team seemingly played over their head last year, Gibby got a reputation, both in Arizona and nationally, as an inspiring leader of men. I don't have any special insight into the clubhouse to know if that is the case, and I'm generally dubious about a manager's impact on the game, but those intangible benefits have been largely lacking this year. And because of that, people have started focusing more on his in-game struggles.

BCB: While the Dodgers are bound to fall off of their insanely hot pace at some point, they still have (as of this writing) a 10.5-game lead on the Diamondbacks. How worried are D-Backs fans right now about the team's playoff chances, on a scale of 1 to 10?

ASP: I'm probably at about a 7 or an 8 right now. I wasn't worried, but dropping a series to the Dodgers at home with Kemp on the DL has not done wonders for my morale. I agree that the Dodgers will fall back to the pack at some point, but every other team in the division, including the Diamondbacks, looks deeply flawed at this point, and the Dodgers have put themselves in a great position to weather some regression going forward.

Thanks to Zavada's Moustache for taking the time, and check out AZ Snake Pit for everything you want to know about the Diamondbacks!