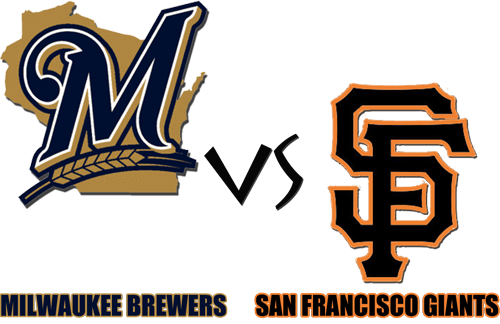 While the Brewers and Giants get ready to keep us up past our bedtimes tonight, Grant Brisbee of McCovey Chronicles was kind enough to answer some questions about the 2012 Giants and this series.

BCB: I'm sure you're sick of hearing about it, but Tim Lincecum's slow start to 2012 generated a lot of national attention. Can you give us the latest on him?

GB: The velocity is down, but the strikeouts and swing-throughs aren't. What worries me more than the velocity is the control -- he doesn't have a good idea where the ball is going most of the time, and most of the damage that's been done has been with change-ups and breaking balls left up in the zone, not on limp fastballs.

BCB: Entering play Thursday Pablo Sandoval was hitting .316/.375/.537 and leading the Giants in home runs, hits, runs scored and RBI. However, he also left Wednesday's game with a hand injury. What do you know about his situation, and is this offense good enough to score consistently without him?

GB: Same injury as last year, different hand. It's a hamate bone, which is like the appendix of the skeleton -- totally useless. So they yoink it out and there's no risk of aggravating the injury. But it'll be four to six weeks.

BCB: Friday night's game will be 12th in a stretch where the Giants play 17 games in as many days (they had an off day on Monday but played a doubleheader to open the streak on April 23). Has playing that many days in a row relatively early in the season had any impact on this team?

GB: I'd think it'd affect any team, but the Giants are relatively young. No, really, they are. Only Angel Pagan is over 30 of the players in the lineup now that Huff's on the DL. So it's affected them like it would any team, I'd guess, but no more.

BCB: The early numbers show the Giants with a .749 OPS this season against right-handed pitchers and .649 against lefties. Is this just a strange quirk, or is this team that much better against right handed pitching?

GB: They are pretty lefty-heavy on the bench, and Sandoval is a better hitter from the left side too. I'd wager the real difference isn't that pronounced, but it doesn't surprise me to see them hit righties better. It's probably more of a surprise that they were hitting righties at all in the first place. The Giants usually struggle against pitchers who use one of their two arms to throw baseballs.

BCB: Finally, what's your read on the NL West? Are the Dodgers for real? Is this Giants team in position to make a run at the division?

GB: I have a sneaking suspicion that Matt Kemp isn't going to hit .400/.500/12.023 for the rest of the year, and I don't have trust the bulk of their offense. But even if I figure their talent level is that of a 75/80-win team, they're already ahead of that pace, and they don't have to give the wins back.

As for the Giants making a run? If Pablo can come back soon, sure. But the offense is repugnant right now. If the pitching isn't as ethereal as it's been the last two years -- and they were pretty fortunate that it was ever that good -- this isn't a good team. If the pitching is just as good, I guess anything's possible.