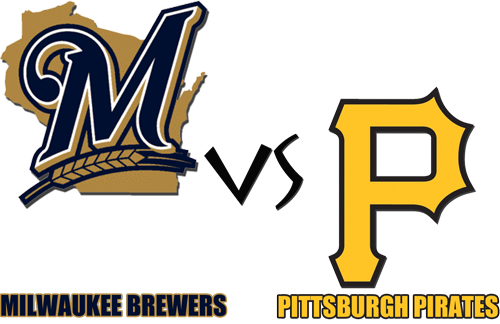 It's hard to believe, but the Brewers are almost a third of the way through the 2012 season and tonight will be the first time they've seen the Pirates. We're going to get pretty familiar with our friends from Pittsburgh over the next few months, as they represent roughly 14% of the Brewers' remaining schedule (15 of 111 games).

To help us get ready for tonight's series opener, Charlie Wilmoth of Bucs Dugout was kind enough to answer some questions about this team. Charlie will also be appearing with friend of the site Justin Hull on The Home Stretch on AM 1570 The Score in Appleton at 4 pm today.

BCB: If I had told you in March that this Pirates team would be 25-25 after 50 games, would you have been happy with that? What were your expectations for 2012?

CW: Sure, .500 is fine, although it's worth pointing out that they've been at around .500 at this point in the season several times during their two-decade losing streak, and they always fall apart. I don't expect this year to be any different, since they've allowed 29 more runs than they've scored. Their hitting will likely be better going forward, simply because it has to be, but their pitching staff will experience regression in the opposite direction.

BCB: Through 50 games the Pirates offense has consisted of Andrew McCutchen (hitting .331/.389/.541) and a bunch of guys with OPS' below .700. Is this how it's going to be all year, or are there some guys here that could step up their production?

CW: It'll be like this all year in that McCutchen is by far the team's best hitter, and there isn't a lot of help on the way from Class AAA or even AA. But the Pirates should be getting more than they have from Jose Tabata, Neil Walker, Garrett Jones and a few other players. They also recently promoted young shortstop Jordy Mercer to start taking at bats from Clint Barmes; it would be a miracle if Mercer turned out not to be an improvement. The Pirates have a bad offense, but it shouldn't be this bad. A minor trade for a AAAA-type hitter, someone like Clint Robinson or Mauro Gomez who's in the minors in another organization, would make a lot of sense. The Pirates don't have any business trading real prospects for big-league help right now, but if they can find their Bryan LaHair on the cheap, that would help a lot.

BCB: Despite being a relatively anonymous group (with the possible exception of Joel Hanrahan), the Pirate bullpen has posted a 2.72 ERA so far this season. What's gone right for them to bring them to this point?

CW: Some of it is straight-up talent -- Jason Grilli, in particular, has been pretty much unhittable, and Brad Lincoln shows signs of becoming a valuable high-leverage guy. But a lot of it is luck. The bullpen is in the middle of the pack in strikeout-to-walk ratio and home runs allowed.

BCB: On Sunday the Brewers will face James McDonald, who has a sub-1.00 WHIP, 2.20 ERA and is striking out nearly nine batters per nine in 2012. What's changed between now and 2011, when his numbers were nothing like this?

CW: His control is better and his breaking stuff is way filthier. He's throwing many more sliders than he used to, and not only is the slider a plus pitch, but it makes his curveball, which is also a good pitch, harder for batters to deal with.

BCB: Despite the fact that this team is in the top half of the NL Central, they're still dead last in the league in attendance. What's it going to take to get people to come out and support this team?

CW: I'm sure better weather would help. At least a couple of the really poorly-attended games have been on days with awful weather, and that's typical for Pittsburgh in the spring. Also, I haven't yet seen any explanation for the Bucs' attendance so far, but my guess is that people feel like they've seen the Pirates do decently before in April and May, and they want to see if it's real. Last summer, attendance didn't really heat up until June and July, when the Pirates were still in the race. That might be the case again this year. That said, the Pirates typically finish 15th or 16th in the National League in attendance, and that's probably just the way it's going to be, at least until they reel off a legitimately good season or two.

Thanks again to Charlie for taking the time, and check out Bucs Dugout for more on the Pirates.