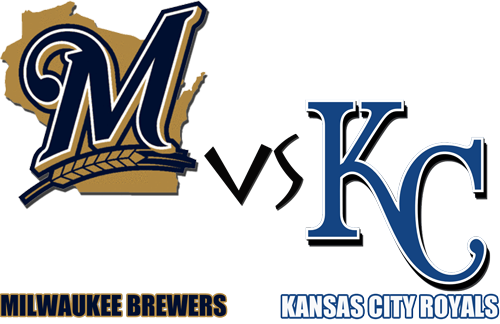 As the Brewers get ready for their first interleague road game of 2012, Jeff Zimmerman of Royals Review was kind enough to answer some questions about Ned Yost's new team.

BCB: The Brewers will face at least two starters this week (Luis Mendoza Tuesday, Luke Hochevar Wednesday) that they've never seen before. What can you tell us about these two guys?

He throws either his fastball (sinks enough to make him a ground ball pitcher), change or curve in the general vicinity of the plate and hopes hitters don't mash the pitch too bad.

Luke Hochevar - Luke is basically two different pitchers. With no runners on base, batters hit 0.253/0.311/0.414. With runners on, batters hit 0.304/0.374/0.474. Most of Luke's starts have him cruising through 4-5 innings. Then, someone gets on base, the wheels start to come off and then the other team has put 5 runs on the board. Pretty much everyone has figured out this pattern except Ned Yost.

Luke's fastball sinks a bit to get some ground balls. Also he throws a curve ball, slider, change and cutter with the slider being the best of that group.

BCB: MLB.com has Thursday's starter as "TBA." Any word on who the starter might be? What happened to leave this gap in the rotation?

RR: The pitcher will come from the AAA team in Omaha. The Royals have been rotating pitchers in and out of Omaha because of injuries and starter suckitude. There is a chance that former Brewer, Jake Odorizzi, may get the start, but it looks like the Royals may be gaming his service time in order for him to avoid Super 2 status.

BCB: Jonathan Broxton hasn't drawn a lot of attention nationally, but he enters this series with a 1.59 ERA on the season and only one outing where he's allowed a run in his last 17 appearances. Has he been as good as those numbers would indicate?

RR: It could be argued that Broxton is having the worse season of any of the regulars in the bullpen.

While some of these pitchers are mainly a LOOGY (Mijares) or a ROOGY (Crow), they have produced better than Broxton. Of the 17 appearances you mentioned, he has only faced the min 3 batters 5 times. He does not give fans must confidence when he is on the mound.

BCB: This Royals team is last in the AL in both walks and strikeouts, and second-to-last in both runs scored and home runs. Is this offense as bad as it looks on paper?

RR: I keep sounding pretty negative, but there hasn't been many positives so far with the team. The offense is not one of the few positives. The main problem is that 3 players the team counted on for offensive production, Hosmer , Gordon and Francoeur, are hitting worse than the pair of former Brewer shortstops, Escobar and "Batter Nine You Sucky" (Yuni's anagram). Only Mike Moustakas and Billy Butler have been hitting the ball with any kind of consistency this season.

RR: Not really. The starting pitching, besides Felipe Paulino, has been horrible. The biggest excitement around the team right now is when will the Royals call up Wil Myers from AAA. Myers has been tearing up the minors this season and, like Odorizzi, will probably get the call to the major league club once the Super 2 deadline has passed.

Thanks again to Jeff for taking the time, and be sure to check out Royals Review for more on the Royals!