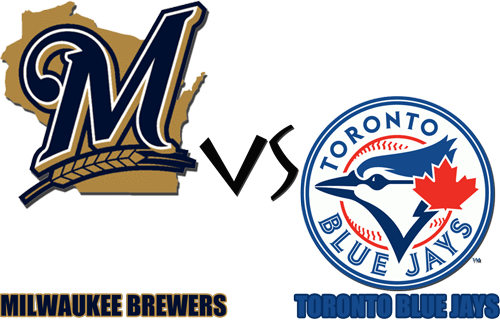 As the Blue Jays settle into the visitor's clubhouse at Miller Park for the first time since 2008, Tom Dakers of Bluebird Banter was kind enough to answer a few questions about the team and this series. I returned the favor over there, and you can see my answers here.

BCB: From a Brewer perspective this week's biggest storyline has to be the Miller Park debut of former #1 prospect Brett Lawrie. However, for all the attention he'll likely receive in Milwaukee he's only posted a .723 OPS this season. Is he worth the hype?

TD: Brett played 43 games for us last year, and hit .293/.373/.580 with 9 home runs and 7 stolen bases, which had us all thinking about a 20/20 season this year, if not a 30/30 season. Well, it isn't happening. He hasn't been driving the ball at all this year. He's hitting .285 which sounds good, but he's not taking walks and he's not hitting with any power. He has been getting an amazing number of infield singles (he runs down the line as well as anyone you'll ever see) but he's not hitting into the gaps, or over the walls, the way he did last year. But then, he's just 22 and in his first full MLB season. Brett's been moved to the top of the order and that seems to helped, he's starting to get us the odd extra base hit. I'm sure the power will come, it just is going to take a little bit longer than we hoped.

On the plus side, his defense has been far far better than we were lead to believe it would be. He makes the odd error, but he has more range at 3rd than anybody we've seen in the spot for a long time. Fangraphs has him at a 20.9 UZR/150 and the eye test backs up their numbers. If I had any faith in the Gold Glove voters, I'd say he was a lock, but I can't imagine them voting him the award. On the flip side, he makes base running mistakes that will make you want to tear your hair out. Down by 2 in the 8th, 2 out and Lawrie at 2nd base, he'll try to steal (and generally get caught). Standing at 3rd with Jose Bautista at the plate, he'll decide ‘hey let's try to steal home'. He's a mass of Red Bull infused energy but he doesn't channel it in the right direction all the time.

All that said, I'm glad he's on our side.

TD: It is likely the same with any top power hitter, but Jose is a streak hitter. When he is hot, he's the best there is, when he isn't, well, he's still pretty good but he'll either miss or take the pitches that you think he's going to drive out of the park. He is as intense a player as you are ever going to see. When he's going good he focuses that intensity into punishing baseballs. Either you guys will walk him a bunch or he'll get us a couple or 3 homers.

BCB: As of Sunday afternoon MLB.com listed the Jays' probable pitchers this week as rookie Henderson Alvarez (who the Brewers have never seen) and two TBDs. What can you tell us about Alvarez, and any thoughts on who else might pitch on Tuesday or Wednesday?

TD: I can't really tell you who the Jays are going to start for the other two games. I traveled to Toronto to watch a week of baseball, you know the baseball line about how you might see something you've never seen before. Well, this week had that. We had 3 starting pitchers leave games with injuries over 4 days. It has to be some sort of record. Brandon Morrow, who has been our best starter, threw 6 pitches and left with an oblique strain. We have no real idea when he'll be back. Two days later, Kyle Drabek made it through 4 innings before feeling a ‘pop' in his elbow. He's gone off to see Dr. ‘He Who Can't Be Named', and it looks like he'll be having the second Tommy John surgery of his life very soon. The next day rookie Drew Hutchison left after 9 pitches with a ‘sore elbow'. It doesn't sound quite as serious as Drabek, they are telling us he won't be having surgery, but he's on the DL. Since I was at all of these games, 76% of Bluebird Banter folks voted that I'm a jinx. Since then I've watched two games without a pitcher going to the DL, so I'm feeling better about myself.

Henderson Alvarez, when all is going right, is a ground ball throwing machine. Everything he throws is down (or should be down) in the strike zone. He's got a 3.87 ERA at the moment. He's good, but he needs a strikeout pitch. He's only getting 2.7 SO/9 and it is tough to be successful like that. Last year he was getting 5.7 SO/9, still not great but with the number of ground balls he gets, we could live with it. Hopefully he will regress (or is that progress) to something closer to last year's numbers.

Right now I couldn't tell you who will start the other games. Choose two from a rather depressing list of not quite ready for prime time starters that include Aaron Laffey, Jesse Chavez, Joel Carreno, Carlos Villanueva, Luis Perez or anyone reading this who gets his resume to the Jays front office in time. The ability to pitch for 6 innings without your arm falling off is not a requirement.

BCB: Entering play Sunday the Blue Jays only had ten saves as a team and just one in the month of June. Is the bullpen situation as much of a mess as that number would imply?

TD: The bullpen has been a mess, we traded for Sergio Santos during the off-season, with the idea he would be closer for the next several years. He blew his first couple of saves, seemed to right himself and then broke. We won’t see him in a Jays jersey for at least another month. They gave the job to Francisco Cordero and he’s been several different shades of awful. Most Jays fans wish he’d be put on the DL with Crappy Arm Disease (CAD strikes 1 in 5 pitchers).

After finally realizing that trusting Cordero with a save situation isn’t something a sane manager would do, the job fell to Casey Janssen, who has been perfect in his 6 save opportunities since being given the job. He’s only allowed one hit, in a save situation, in the 6 weeks he’s had the job. If we can get to Casey with a lead, all is good.
BCB: A 34-32 record would be enough to be right in the middle of the race in several divisions, but in the AL East it's only good for fourth place. What are this team's chances of competing for a playoff spot this season, and do you expect them to make any moves at the trade deadline?
TD: Until the rash of injuries to starting pitchers, this past week, I figured we’d be buyers. No one is going to run away with the division this year and, with the extra playoff spot, we had a pretty good shot at having at least one post-season game. Now? I’m sure our GM has been on the phone with every team in the league, looking for starting help, but it is hard to believe we can stay in the race after losing 3/5 of our rotation. I think the team will see how the next month goes, but I’m guessing with be selling off assets.
Thanks again to Tom for taking the time, and don't forget to check out Bluebird Banter for more on the Blue Jays!