Share All sharing options for: Stat Of The Night: Fastest To 1000...Or Not

With singles in his first two at bats tonight Ryan Braun made history: He's just the eleventh player in franchise history to collect 1000 hits as a Brewer, and the first to reach that milestone since Jeff Cirillo did it in his final Brewer at bat in September of 2006.

It's been widely reported (including by me, my mistake) that Braun is the fastest Brewer ever to reach 1000 hits. That's only partially accurate. Among players who collected their first 1000 major league hits as Brewers, Braun is the fastest to do so. He picked up his 1000th hit in his 815th game, which was faster than Paul Molitor's 835. It wasn't, however, faster than Cecil Cooper.

With that said, I don't feel too bad about my mistake since FS Wisconsin made the same one: 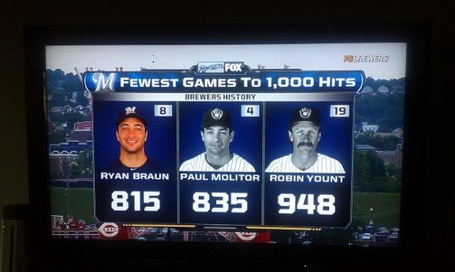 You'll notice that this graphic doesn't include any attribution to me, so I'll just assume that FS Wisconsin's researchers and I made the same honest mistake. That has to be the case, right?