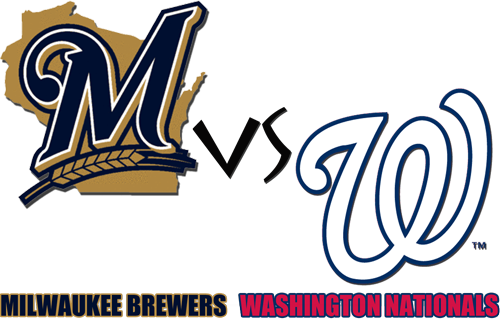 The Brewers have played 97 games this season, and at least one against 14 of their 15 NL adversaries. They'll complete the circuit tonight when the Nationals come to town for the first time in 2012.

While these two teams were getting ready to open a four game set tonight, Patrick Reddington of Federal Baseball was kind enough to answer some questions about the Nationals and this series.

BCB: The Nationals enter play Thursday as winners of five straight and owners of the NL's best record. Is this more than all but the most optimistic Nats fan could have expected coming into 2012?

FB: I had the Nationals around 86 wins this season, thinking a jump of around another ten wins this year from 69 in 2010 and 80 last season to around 86-90 wins was reasonable and would have them competing for a playoff spot this season. With Stephen Strasburg pitching most of the season, Jordan Zimmermann in his first full-year, Gio Gonzalez in the NL for the first time and Edwin Jackson as a strong no.4 it seemed possible. Honestly, the most surprising thing about the way the Nationals have played so far is that they've done it in spite of significant injuries to players like Drew Storen, Michael Morse, Ryan Zimmerman, Jayson Werth, Wilson Ramos, Ian Desmond and more. I thought ideally they'd compete with strong seasons from all those players. The fact that they've had the depth to overcome the injuries with really strong pitching the key until recently has been a surprise.

BCB: Coming into Wednesday the Nationals had four starters (Jordan Zimmermann, Gio Gonzalez, Stephen Strasburg and Ross Detwiler) with ERAs at or under 3.13. Is pitching the reason this team has been successful?

FB: Absolutely. Pitching and defense, because the offense has only really come together recently as the Nats got Ryan Zimmerman back and back to full-strength, got Michael Morse off the DL and got Danny Espinosa on the way to getting things turned around from the left side. Ian Desmond has carried the offense to some extent, especially after they moved him to the six-hole. Desmond settled in batting sixth and has a .320/.361/.522 line since Davey Johnson moved him there for good. But the starting pitchers have the NL's lowest ERA (3.11), lowest FIP (3.32), second-lowest xFIP (3.57), highest fWAR (+11.9), second-highest K/9 (8.15) and third-lowest HR/9 (0.76). They've been dominant. Strasburg and Gio obviously and Jordan Zimmermann quietly, and E-Jax and Ross Detwiler at 4-5 have been strong too.

BCB: Eight different Nats have played at least one game in left field this season and they're collectively hitting .223/.290/.332 while doing so. Is there a reason this position has been such a black hole offensively, and is there a plan for it going forward?

FB: Michael Morse was supposed to be there all season. That's the simple answer on the weak production from the position. A lat issue that cropped up this Spring kept him out of the lineup until June 2nd. Davey Johnson tried everyone he could over there over the first few months, before settling on putting Steve Lombardozzi (an MiLB Gold Glove winning second baseman in the minors) out in left to keep him in the lineup when he was producing at the plate. Once Jayson Werth comes back, which we're hearing is sooner rather than later, Morse is expected to move back over to left full time with Harper and Werth in center and right, respectively, going forward. While Morse is a suspect (slow-footed) defender, he has a .295/.315/.451 line since he came back so he'll improve that LF slash line some before it's over.

BCB: I'm sure you're sick of answering questions about it, but what's the latest on the Stephen Strasburg/inning limit situation? Do you agree with the way this is being handled?

FB: The latest news on the innings limit is that the Nationals, at least publicly, have no intention of budging from the stance they've taken since his rehab started. They still haven't clearly said when he'll be shut down, but no one's denying that he's going to be shut down at some point. Most estimates have his first full-season back from Tommy John ending in the first two weeks of September regardless of where they are in the standings. The GM, doctors and even his agent Scott Boras are on board with the plan from what they've said. Personally, it's hard to look at the progression Jordan Zimmermann has made over the last two years and not think that the Nats know what they're doing. Knowing how rare an opportunity to go to the post season is as an Expos and Nationals fan who's become familiar with D.C. baseball history, however, it just doesn't feel right that he won't be there even if you think it's the right thing for Strasburg's future.

BCB: Finally, the trade deadline. Do you expect the Nats to add talent between now and July 31? If so, what makes sense?

FB: I don't think the Nationals want to trade the sort of prospects they would have to in order to get any sort of game-changer at the deadline. Davey Johnson's said pretty clearly that he thinks he has the necessary players on his roster to compete down the stretch. They traded away their top pitching prospects to get Gio Gonzalez this winter and I don't see the Nationals dealing the pitchers most teams would be asking for, the Alex Meyers of the world, for a rental when they're not going to get the compensation they would have in the past when they leave as FA's. I'd think they're more likely to get a decent catcher who can back up/split time with Jesus Flores this season. I like the young catchers they've worked in since Wilson Ramos got hurt, but I'm not sure the Nats want to make a run at a playoff berth with Sandy Leon or Jhonatan Solano the best options if they have any more issues with their catchers. So I could see them adding someone behind the plate, or maybe a bench bat, but anything else would be a surprise. (Note: I didn't say anything about the Nats getting Greinke to agree to an extension so they could trade for him like they wanted to two years ago. Not a word.)

Thanks to Patrick for taking the time, and be sure to check out Federal Baseball for more on the Nats!