A Streak of Incomplete Games

Share All sharing options for: A Streak of Incomplete Games

Since early in the 2011 season, there has been a streak going on that has gone by quietly, but has the chance to be historic. The Brewers have now gone 280 straight games without recording a complete game. In terms of Brewers history, this is the longest streak by far. The second longest streak was 193 games, which occurred from April 24th, 2009 to June 23, 2010. The Brewers hit game 194 of their streak on Wednesday, May 16th against the Astros.

This streak is also approaching the MLB record for consecutive games without a complete game. That streak is 301 games, which was set by the Florida Marlins (now the Miami Marlins). That streak started on September 17, 2006, and the last game of the streak was on August 18, 2008. The Brewers just need 22 more games without a complete game to set a new record. Looking at the schedule, that streak would be broken on Friday, September 14th against the Mets. That will be the 302nd game of the streak.

Is this a problem? After all, the complete game has been on a decline over the last several decades. In fact, it's been a drastic decline. Check out the graph below for a visual representation of this: 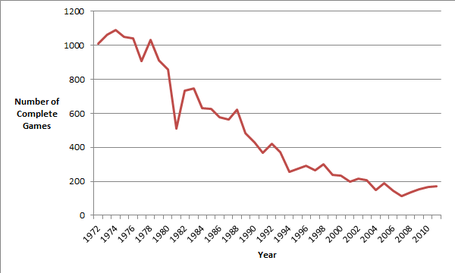 (Here is the data from FanGraphs if you want to look at it closer.)

We'll discuss that further after the jump.

Looking at the streak further, the Brewers have had few chances to even complete a game. In the 280 games, a starter has pitched in the ninth inning only once. That was Zack Greinke, who pitched in the ninth inning against the White Sox. He actually pitched a full nine innings in that game and allowed no runs, but because the offense did not score in those innings, it went into extra innings and Greinke did not complete the game.

Going further into it, the starters for the Brewers have completed the eighth inning fifteen times during the streak. No starter has done it more that four times. That's only 5.36% of games that the Brewers have a starter finish the eighth inning. Let's look further into those games. For the sake of argument, let's say that a pitcher's limit is around 120 pitches. In the fifteen starts where a starter completed the eighth inning, a starter was at 110 pitches or less in eleven of those. Going further, a starter was at 100 pitches or less three times. The opportunities have been there. Why haven't they been taken?

Some of it has been the need to pinch hit. That's a concern in the National League and it does prevent starters from finishing the game some of the time. In 2012, the American League (with fourteen teams) has fifty-seven complete games, and the National League (with sixteen teams) has fifty. Specifically, for the Brewers, let's look at the situation for those fifteen games. In eight of the fifteen, the pitcher was pinch hit for before the ninth inning. Six of those were situations where the Brewers were leading by three runs or less. That helped prevent some of these starters from going back out for a ninth inning.

Another factor is pitch efficiency. Basically, what this refers to is how fast a pitcher can get a batter out. In a complete game, a pitcher has to be able to get batters out across nine innings (or however long the game takes). For the Brewers, this hasn't been an area of strength. Let's take a look at Yovani Gallardo as an example. He's been over one hundred pitches in twenty-two of his twenty-six starts in 2012. In those starts, he pitched six or fewer innings in ten of them. Compare that to Zack Greinke. In twenty-one starts with the Brewers, he finished a game with six or fewer innings pitched and over one hundred pitches only three times. Using those pitches as effectively as possible is key to getting through a complete game.

Bullpen reliability has been another factor. Looking back at the 2011 season, it was understandable why Ron Roenicke didn't always want the starter to finish the game. The Brewers bullpen was reliable, and finishing a game wasn't an issue. Remember that last year, the Brewers were 81-1 when leading at the start of the ninth inning. If the bullpen is reliable enough to finish a game that consistently, it makes sense to use them when possible in the ninth inning.

In 2012, the bullpen hasn't been as reliable, but the chances also haven't been as good. There were four chances to pitch a starter in the ninth inning. Three of those were by Greinke, and in two of those, the Brewers were tied at the end of the eighth inning. In the other, Greinke was only at 100 pitches and had made it through nine innings, and had a chance to finish the game. However, Ron Roenicke pulled him anyway, stating that the breaks between innings would have put too much stress on his arm.

This just goes along with the new mentality that has come across baseball. With contracts at all-time highs and injuries an even greater concern, pitchers and teams want to do what is best for themselves. This means that pitchers are protected, kept as safe as possible to keep them pitching as long as possible. A player cannot risk losing a big payday because of a freak injury, and a team doesn't want to lose money because a star player is out injured. Back in the 1970s, pitchers wanted to complete their own games. Now, with a bullpen mentality in place all across the game, the idea of a starter finishing a game is shrinking to the point that it is almost gone.

Will the complete game ever disappear from baseball entirely? No, that probably won't happen. There will still be complete games, though they will be more exciting because they do not happen as often anymore. When will the Brewers next complete game arrive? It will happen at some point. Seventy different pitchers have thrown a complete game so far in 2012. On that list are the usual big names like Justin Verlander, Felix Hernandez, and Clayton Kershaw. There's also names you wouldn't expect, such as Dallas Keuchel, Luke Hochevar, and Jason Marquis. It shows that anyone can throw one, including the best and worst pitchers. For the Brewers, it's just a matter of everything lining up on the right day. The only question is when that day will be.

(Statistics used in this story were taken from Baseball-Reference.com and FanGraphs.com)