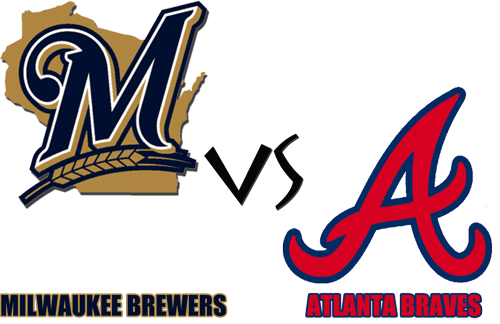 While the Brewers and Braves prepare for their final meeting of 2012, we traded questions with Alex Remington of Braves Journal regarding our respective teams and this series. My answers to his questions will be over there, and his answers are below.

BCB: The Braves followed up an 18-8 July with a 15-14 August. They were still 20 games over .500 entering play Sunday, but do the events of last season make it even more important than usual for them to finish strong?

AR: Last season is in the back of everyone's mind, but it isn't in the front. While the collapse was horrendous, it says a lot about the organization that the aftermath was a lot less grim than in Boston. While it's possible for fans to criticize the fact that the front office did very little in the offseason to address one of the biggest chokes in sports history, general manager Frank Wren was correct to assert that the Braves as constructed in 2011 would remain a competitive team in 2012. The in-season acquisitions this year — from obtaining emergency defensive shortstop Paul Janish to getting one month of Ben Sheets to trading the injured Arodys Vizcaino for Paul Maholm and Reed Johnson — did much more to upgrade the team than the front office managed in the offseason.

The final series of the season is three games at Pittsburgh. Ideally, they'll be up in the wild card standings by more than three games, so they can rest easy and not worry about having to win out. As a fan, I'd love to see the Pirates get back into October. I'm not a huge fan of Fredi Gonzalez as a tactical manager, but I give him a lot of credit for holding the team together and getting them focused on winning in 2012, unlike the nuclear meltdown that we've seen here in Boston.
Follow the jump for much more!

BCB: Mike Minor (who will start for the Braves on Monday) is still only 24 years old but is carrying a 4.58 ERA in his third major league season to go with his 4.65 career mark. What do you think the future holds for the former #7 overall pick?

AR: Minor has had an unbelievably up-and-down season. You can basically split it into three sections: his first four starts (3.42 ERA, 21/5 K/BB), his next nine starts (7.43 ERA, 51/33 K/BB), and his most recent 11 starts (2.58 ERA, 52/13 K/BB). At the start of the year, it looked like Minor had a bit of bad luck with longballs, which started to snowball into a loss of confidence into his fastball. By looking at those K/BB stats you can pretty easily see that his command went awfully wobbly as the season went south, his fastball command visibly degrading as he started to nibble, appearing afraid of throwing strikes. By the end of June it was hard to understand how he was still in the rotation. But since the start of July he's been one of the best left-handed starters in the league. Along with Brandon Beachy, who should be back from Tommy John surgery next year, and the brilliant Kris Medlen, Minor is a big part of our future.

BCB: Craig Kimbrel appears likely to lead the National League in saves for the second consecutive season. Is he the best closer in baseball?

AR: Craig Kimbrel is a luxury yacht. He isn't better than Aroldis Chapman, who's pitched a lot more and has even better components, but he sure isn't a whole lot worse. There are a lot of things that a baseball team needs more than they need an unhittable closer, like offense and defense, and watching teams overpay for closers in the offseason — like the woeful Marlins and Phillies — is painful. But, my God, having Craig Kimbrel on the team is sheer bliss.

However, the rest of the pen is quite good, too. Against all odds, Chad Durbin has been having a pretty good season for us. Unheralded rookie southpaw Luis Avilan has been terrific in mop-up work. Jonny Venters hasn't been as untouchable as he was the last two seasons but he's still been good. And I think Eric O'Flaherty, who has a 2.01 ERA over 223 2/3 innings in four years in Atlanta, is the most underrated reliever in baseball. The Braves' bullpen ERA is 2.95, second in the NL behind only Aroldis's Reds. It's a serious strength of the team.
BCB: Chipper Jones is 40 years old but still leads the Braves in OBP (.376) and OPS (.862) this season. He's made it clear he plans to retire following the season, but should he?
AR: I'll say yes. First, there's the Brett Favre/Roger Clemens factor: I like and respect Chipper too much to want to see him engage in the farce of unretirement, after he's had such a wonderful farewell tour around the league, not just with his play but also in all of the ovations he's received in every city.
Second, though, his defense — which was never great in the best of days — has worsened significantly. He could probably hang around for a year or two as a DH in the American League, but people who stick around that long almost always wind up embarrassing themselves.
That said, he's still one of the best hitters the Braves have, and he has by far the best plate discipline of any Braves hitter. No one else on the team is within 20 points of his .377 OBP. But that's not an argument for Chipper to stick around so much as it's an argument for the Braves to take more walks and get more hitters.
BCB: 2012 is the first season since 2005 where Brian McCann wasn't an NL All Star, and his .231/.300/.409 batting line is well below his .280/.352/.477 career mark. What's happened to him this year?
AR: I'm not entirely sure. He's had recurring problems with his vision over the last several years, and he has also had shoulder problems requiring a cortison shot recently. He's had a terrific couple of days, going 5-9 with two homers and six RBIs in the last two games against the Mets, but I'm not ready to say that he's turned a corner. The thing is, he's played nearly 1000 games behind the dish, and catchers age faster than other players. His baseball IQ is still tremendous — one of his four hits on Saturday was a bunt single against the Ted Williams shift that teams regularly employ against him — but it's possible that his future performance will fall somewhere in between 2011 and 2012, rather than bouncing back completely to where he was before. So I guess I'd say that the problems could have to do with physical ailments, they could have to do with age, and they could have to do with bad luck — it's some combination of the three but hard to know exactly what measure of each.
The Braves have a team option for $12 million for McCann in 2013, which they're almost certain to exercise. But that's when it gets interesting. Long-term contracts for free agent catchers are awfully dangerous: just ask the Minnesota Twins. McCann's a six-time All-Star who left a lot of money on the table when he signed a six-year, $26.8 million deal with the Braves back in 2007, one of the best contracts the Braves have ever inked. McCann deserves to get paid, and he undoubtedly will get paid by someone. Maybe it will be an AL team that doesn't mind signing him as a catcher but resting his legs as a first baseman/DH, like the Tigers did with Victor Martinez. I love McCann, but I doubt that he'll fit into the Braves' financial plans following 2013.
Which is a great shame. I'd love him to be another Chipper Jones and retire in a Braves uniform. But the Braves are no longer big spenders. I'm not optimistic that they'll keep him. So I hope that they'll be able to give both Brian and Chipper some nice jewelry this October. Flags fly forever.
Thanks again to Alex for taking the time, and be sure to check out Braves Journal for more on the Braves!