It's a rainy afternoon in Appleton today but that didn't keep a few dozen fans from coming out to greet the bus as the Wisconsin Timber Rattlers returned home after winning the Midwest League Championship Sunday night in Fort Wayne. Fireworks went off, confetti filled the air and a line of excited fans greeted the players and coaches as they got off the bus for the final time this season.

"Coming back with the fans here, it's just phenomenal," Timber Rattlers pitcher Chad Pierce said. "I don't think any of us would've thought we'd have a whole bunch of people here, especially when it's raining."

Appleton baseball fans haven't had many opportunities to celebrate a moment like this. Wisconsin's title is their first since becoming the Timber Rattlers in 1995, and the city's first since the 1984 Appleton Foxes. That team featured future major league pitcher Doug Drabek and White Sox general manager Kenny Williams.

"Obviously there's a bunch of emotion there for our players and our staff," Wisconsin manager Matt Erickson said. "For me personally I'm very happy for them, proud, there's a sense of relief too. You put all that time and work into it and they have to believe in it. They believed, and went out and were able to execute. It was fun to watch."

Erickson's team went to Fort Wayne needing to win two out of three to take the best-of-five series, and won both games three and four. Wisconsin's offense had managed just six hits in the series' first two games, but exploded for ten runs in the third game.

"We've swung the bat pretty good off some lefthanders, so that seemed to spark our offense the first game in, and then yesterday we went back to just doing enough to get 'er done and getting the big hit late," Erickson said.

The big hit Sunday came from a likely source: Timber Rattlers first baseman Nick Ramirez. Ramirez led all Midwest League hitters with four home runs and ten RBI in the postseason. His final hit of the 2012 campaign was a two-run double off a left-handed pitcher, and came just a few weeks after Ramirez said he's been struggling to hit lefties this season.

"It definitely feels good. It showed me that what I was working on paid off," Ramirez said. "Just trying to simplify the approach and not do too much definitely let me see some better pitches and give the Rattlers some momentum at big times."

Ramirez led Wisconsin with 16 home runs and 70 RBI during the regular season. He also led all Midwest League hitters with eight walks in the playoffs, despite walking just 26 times in 96 regular season games.

"You never know how the season's going to go when it first starts. Unfortunately he was a guy that got hurt in spring training, we missed him about the first month of the season and he struggled when he first got here, but he put some things together and led our team in home runs and RBIs," Erickson said. "He wasn't swinging the bat real good, to be honest, towards the end of the regular season but in the postseason his bat came alive and he had a bunch of big hits for us."

One of the players who scored on Ramirez's double Sunday was one of the Rattlers' more unlikely heroes in 2012. Former undrafted free agent Brandon Macias started at third base and batted leadoff in all nine of Wisconsin's games this postseason, leading all Midwest League hitters with ten hits and nine runs scored in the playoffs.

"I was leading off toward the end there and just trying to get on base and see a lot of pitches in each at bat, and ended up getting some good pitches to hit. It worked out and I got on base for the guys behind me," Macias said.

Counting the postseason Macias appeared in 136 games this season. He hit .288/.388/.423 with 35 doubles during the regular season in his first full professional campaign.

Elsewhere in unlikely heroes, 2012 draftee Brent Suter pitched in two games and worked six scoreless innings during the final series after appearing in just three games for Wisconsin during the regular season. Suter recorded the final nine outs for the save on Sunday and said he had to calm himself on the mound a bit before his final inning.

"My parents and everybody asked me 'were you nervous out there?' I didn't feel like I was nervous but coming around the mound going out for the ninth inning I could feel my heart beating out of my chest and I was like 'uh-oh, I need to calm that down a little bit," Suter said. "But it was incredible. The guys played great defense behind me all year and just being in those moments, you can't explain it. Getting that final out and being able to celebrate with the whole team out there was a dream come true."

Follow the jump for more, including a picture of the 2012 Midwest League Championship trophy.

Many of these Timber Rattlers players won't have a lot of time to celebrate, as they're ticketed for instructional league in Arizona. The final day for players to report to Arizona for that league was supposed to be Sunday, but Wisconsin still had some business to take care of at that point. Their extended season has created some uncertainty with their planning going forward.

"We don't even know when we're heading home or anything like that," Pierce said. "We've got to head down to Arizona as well. We're just in here to get our last checkups in and then find out what's going to go on."

In the meantime, the Timber Rattlers got a text from Mark Attanasio last night saying "winning matters at all levels," and they've got the trophy pictured below: 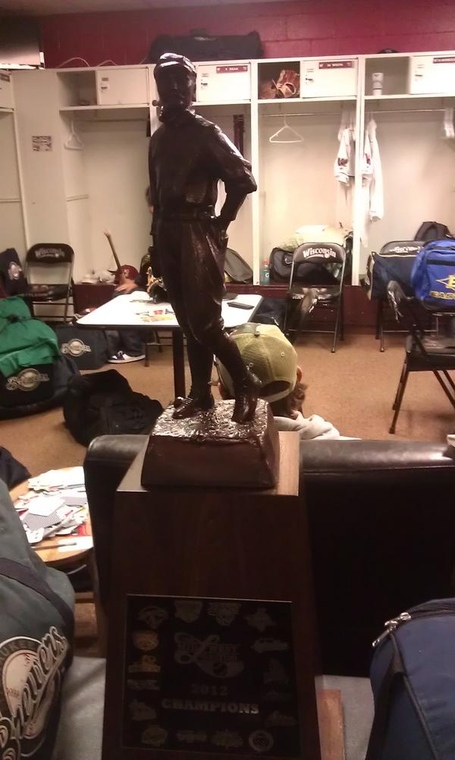 The trophy, made by Brodie Trophy of Janesville, features a statue of an unidentified man. Here's what Brodie owner Jason DeZwarte told me about it:

"The statue itself is a sculpture made for us by an artist in Pennsylvania. Although the piece is simply named "Old Time Ballplayer" our story is...so legend has it...the player is Dr. Archie "Moonlight" Graham from the movie Field of Dreams. When we first created the trophy we were really trying to capture the history of the league as well as the small town, grass-roots feeling of minor league baseball. Being the movie took place in Iowa and the Midwest League has affiliates in Iowa.... the legend has continued to grow."

The trophy and a new pennant will be there when Wisconsin opens a newly renovated Time Warner Cable Field next April. In the meantime, Erickson and his players have a few months to enjoy their accomplishments.

"It was a great feeling, no doubt about it. I'm very happy for our players, they put in all the time and effort into the preparation. We were a very consistent team all year, winning the Western Division and getting homefield advantage throughout the playoffs, which helped us tremendously. We had some great starting pitching through the playoffs, and they were able to get it done yesterday. It's a great feeling," Erickson said.

"It definitely means a lot to be the last team standing," Ramirez said. "Not many people get to do this in their entire baseball career. It's an honor."