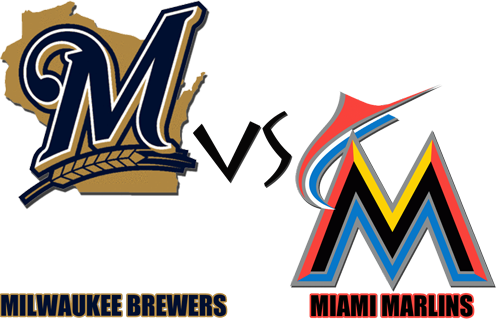 The Brewers are in Miami this morning getting ready for their first-ever game at the new Marlins Park and their final meeting against the Marlins this season. To help us get ready for today's series opener, Michael Jong of Fish Stripes joined us to talk about the team and this series.

BCB: I might as well start with the obvious question: Obviously a 59-74 record (entering play Sunday) isn't what the Marlins were expecting from this season. What's gone wrong?

MJ: Essentially, all but two or three players performed below their expectations, and some by such an extreme margin that the Miami Marlins simply could not recover. Names like Logan Morrison, John Buck, Gaby Sanchez, and even Jose Reyes up until recently performed so poorly that they cost the team up to five wins total compared to what they were expected to do. When half of your lineup eats up five wins from your expectations, you are bound to look bad by midseason.

In fact, the team looked so bad through June that the Marlins front office compounded the problem by trading away two contributing (if underachieving) players in the starting lineup, further damaging the club's talent level. By the time those trades and certain injuries were taken into account, the Marlins were suddenly left with an empty lineup and all of their starting pitching depth depleted. Thus, their season went from "underachieving" to disastrous during July and August.
Follow the jump for much more!

BCB: Jacob Turner is scheduled to start for the Marlins Tuesday in his first career appearance against the Brewers. What can you tell us about him?

MJ: Jacob Turner has had a promising first two starts for the Miami Marlins thus far. He came into the organization as an elite prospect name whose shine had dulled due to a difficult season in Triple-A. When he arrived in the Marlins organization, his Triple-A struggles, particularly with strikeouts, continued. However, prior to his first start, I theorized that his strikeout concerns were not as damning because his whiff rates were still decent. Sure enough, he has whiffed 11 batters in 11 innings as a Marlins pitcher while walking none. He still has some concerns with home runs, but you are looking at a young pitcher with solid stuff, good control, but difficulty with his placement and command.

BCB: Batters have hit 82 home runs (entering Sunday) this season at new Marlins Park, placing it 14th among 16 NL ballparks. For contrast, there had been 177 hit at Miller Park before Sunday's slugfest. Is it safe to call the Marlins' new home a pitchers' park? An extreme pitchers' park?

MJ: Right now, it is fairly obvious that Marlins Park suppresses home runs, and indeed it felt obvious since before the season began given the stadium's dimensions. But it is not obvious that the park suppresses runs as a whole; in fact, so far this season, it has been at worst league average in terms of runs. The likely cause, outside of extremely small sample sizes in terms of determining park factors, is that the park allows an above average number of triples to make up for some of the lost home runs.

Chances are, however, that Marlins Park will suppress runs to a degree. Is it an extreme pitcher's park, like Petco or Safeco? I doubt that could be the case given the very indoor nature of the stadium (the Marlins have kept the roof closed and the elements away from the stadium for most of the season). But the dimensions as of right now are big enough that, at the very least, they should suppress home runs and make it a pitcher's park.
BCB: Have the Marlins made or are they planning on making any September callups? Is there anyone coming up we should watch for this week?
MJ: The Marlins are not planning on many September call-ups, which is odd given the nature of the team's season. However, the reason for this is only because the Marlins already have those players up in the majors and have had them for up to a month. Players like Turner, Rob Brantly, and Nathan Eovaldi have been contributing to the Marlins in the majors for a little while since they were acquired in midseason trades. The Marlins' top prospects, outfielder Christian Yelich and pitcher Jose Fernandez, are too young and in too low a minor league level to be brought up at this stage, and the team has no other talent at the top of their minor league system.
BCB: The Marlins spent a lot of money last winter and it didn't really work out. What do you expect them to do this winter?
MJ: This winter may be as important as 2012 in terms of setting the team's identity up in future seasons. The club is certain reinforcements from the minors should arrive in 2014, so the question becomes whether the team will attempt to enter fringe contention in 2013 and solidify a contender with minor league parts in 2014 or whether the team will allow a youth movement to take over so soon after the team went for it all in 2012. My personal opinion is that the Marlins have no other option than to sign players for 2013 with a good 2014 core in mind, but that decision apparently has yet to be made internally.
Thanks again to Michael for taking the time, and don't forget to check out Fish Stripes for more on the Marlins!