Before he was one of the game's best knuckleballers, Candiotti was a 1983-84 Brewer.

16 year major league veteran Tom Candiotti pitched in 451 games as a member of five teams, and many fans around baseball probably forget that the Brewers were the first of them.

Candiotti had not yet perfected his patented knuckleball when the Brewers took him away from the Royals in the 1980 Rule 5 draft and brought him to the majors for the first time in 1983. He appeared in ten games for the Brewers that season and posted a 3.23 ERA, which was enough to get him on Donruss card #393 for 1984: 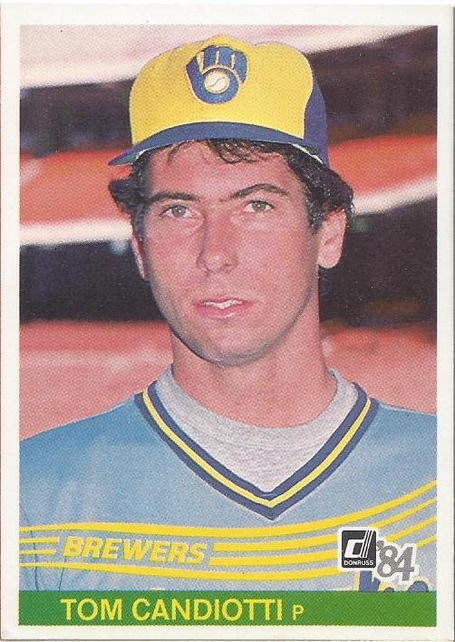 Candiotti's 1984 season was nothing to write home about: He posted a 5.29 ERA over eight appearances before being sent back to the minors, where he also spent the '85 campaign before becoming a minor league free agent.

The Indians picked up the righthander for the 1986 season and his fortunes immediately changed: Candiotti pitched 200 or more innings in each of the next eight seasons, winning 97 games and posting a 3.38 ERA.

Candiotti is also the subject of one of the most ridiculous grudges you'll see today. In August of 1992 he apparently turned down a kid's interview request and over 20 years later that kid is still spending his own money to air that grievance on Candiotti's B-Ref page.

With help from Brewerfan.net and the B-Ref Play Index, we'd like to wish a happy birthday today to:

Today is also the 35th anniversary of the announcement that longtime Milwaukee Brave Eddie Mathews would be inducted into the Hall of Fame in 1978. We covered that event in Today In Brewer History last year.

After over 500 installments spanning two seasons and a full offseason, there are some days where I've exhausted all of the available content for Today In Brewer History.Brewers A-Z is a supplemental feature to help fill in the gaps in my historical calendar. You can see past installments in the series in its special section.