Depending on how you want to look at it, Cancel has spent either 12 years or 45 games as a major leaguer.

Puerto Rico may not be the first place you'd think to look for a potential major league catcher, but you certainly could do worse. 30 Puerto Rican catchers have played in the major leagues, including 17 that have been active since the start of the 2010 season. Among those are one current and five former Brewers: Martin Maldonado, Wil Nieves, Carlos Corporan, Mike Rivera, Raul Casanova and Robinson Cancel. 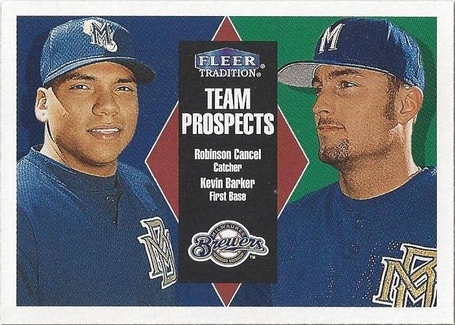 Unfortunately, Cancel and Barker have another thing in common: short major league careers. Cancel returned to the minors with the Brewers in 2000 and had played in several organizations and independent ball before resurfacing in the big leagues for 27 games with the Mets in 2008. He last caught in the majors as a member of the 2011 Astros, and spent the 2012 season with Monterrey in the Mexican League.

After over 500 installments spanning two seasons and a full offseason, there are some days where I've exhausted all of the available content for Today In Brewer History.Brewers A-Z is a supplemental feature to help fill in the gaps in my historical calendar. You can see past installments in the series in its special section.