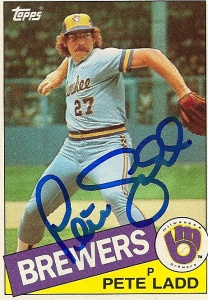 The Brewers finished 21st in winning percentage in 1984, and the 21st ranked player in WAR was pitcher Pete Ladd.

Pete Ladd was a 25th round draft pick for the Boston Red Sox in 1977, and there were steep odds against him ever making it to the majors. But he proved himself at every level, and after being traded to the Astros in 1979 and the Brewers in 1981, he got his shot in 1982 when Hall of Fame reliever Rollie Fingers was missing time due to injury.

Called up in June in the heart of a pennant race, Ladd was an instant contributor. Setting up Fingers to reduce his multi-inning appearances, he gained experience as the season went on, and capped his rookie season with four scoreless appearances in the 1982 World Series.

Ladd built on that confidence by moving into the closer role for the Brewers in 1983 when Fingers missed the season with a back injury. He saved 25 games for a bullpen that really saved a lot of games for the team. Despite multiple injuries and missed expectations, the bullpen picked up 28 of the Crew's 87 wins.

But the decline of the team was clear, and it became clear to Ladd that he didn't have a role in the rebuilding plan. Fingers regained the closer spot in 1984, in '85 Bob Gibson became the favorite alternate, and Ladd was left to mop-up duty. He was still young and effective but wasn't what the team was looking for, and Ladd wasn't happy with his role either.

The whole bullpen kind of disappeared last year. Bamberger is supposedly the premier pitching coach, but he didn't like to use his bullpen. There were a lot of people sitting.

They wanted to go with a younger team, and that's fine. I needed a new atmosphere. I was glad to get out of there.

Ladd signed with the Seattle Mariners and both he and the M's found the relief they were looking for, and Manager Dick Williams was happy with his free agent:

I like his attitude. he just wants to get the ball and go get them. So far he has been doing all the getting.

Ladd had his best all-around season in 1986, but it was his last in the majors. Ladd spent 1987 in Albequerque in the Dodgers system, and he didn't pitch well. At age 30 he was out of a job, but he still has great memories of his days pitching for the Brewers.

1984 FotF: 1985 was Ladd's last season with the Brewers. The team wanted to change over personnel, and the personnel wanted to change the manager (which they did after 1986). He had lost his role like a lot of players, but did his best for a team in decline. As a late-round pick he was fortunate to get a chance at all, and he did his job well when he got the chance. 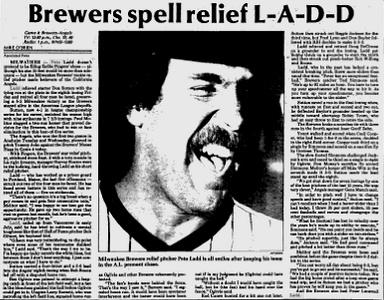