Norichika Aoki trade rumors: Could the Mets and Brewers work out a deal?

Share All sharing options for: Norichika Aoki trade rumors: Could the Mets and Brewers work out a deal?

The New York Mets have been vocal that they are looking to trade one of their first baseman with both Lucas Duda and Ike Davis at the position. They also contacted the Brewers in July about Norichika Aoki's availability in a trade. At the time, the Brewers weren't looking to give him up. Now, Milwaukee is rumored to be open to a trade and are seeking left-handed power at first base. As it happens, both Davis and Duda are lefties with power.

For the Brewers, either player would help fill a need. They may not be perfect options--hell, they might end up being terrible--but for one year of Aoki they can't expect much, and getting several years of a first baseman that could be above-average might be a winning deal.

In Triple-A, he hit the cover off the ball, posting a 1.091 OPS in 21 games. He was brought back to the majors in mid-July and hit .267.429/.443 for six weeks before an injury ended his season. Is he the hitter before his demotion or the hitter after? Is he a 30 homerun hitter, or was that just a fluke? Is he Juan Francisco 2.0?

Duda, 27, comes with a little more flexibility over Davis. He has played 233 major league games in the outfield along with 83 at first base. In parts of four major league seasons, he has hit .246/.342/.424 and would likely be a 20 HR hitter in a full year at the plate. That line is probably pretty much exactly what you could expect from Duda going forward.

He's the safe bet between the two first baseman. Davis could flame out or he could channel Carlos Gomez and break out offensively. Both players also have been really bad against left handers in their career and pretty good against righties (it's why whoever remains will likely platoon with Josh Satin at first in New York). A trade for either almost definitely spells the end of Francisco's Brewers career. But the team may want to find someone to platoon with Davis/Duda were they to make a trade for one of them.

The increasing cost of contracts: Ricky Nolasco, Ervin Santana and the Brewers 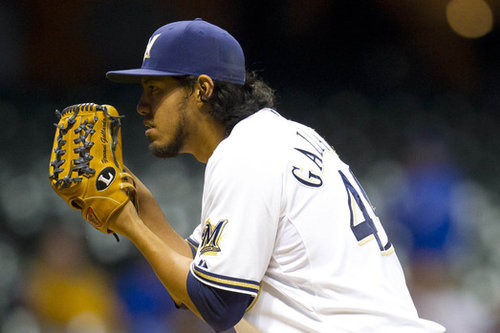 For the Mets, the need in the outfield is obvious. Eric Young and Juan Lagares are dreadful at the plate, and they have no right fielder since trading Marlon Byrd. However, the Mets are also looking to upgrade in power, of which Aoki clearly does not have much. Byrd was the only player to hit 20 homers for the Mets in 2013, and David Wright was the only other to surpass 15 long balls. However, the Mets could also use someone who gets on base well (Aoki does) that could lead off games (Aoki can). He also gives New York a cheap starter that will allow New York to sign other pieces in the offseason. They are also rumored to be interested in free agent Shin-Soo Choo.

Were the traded players to have a similar amount of team control, a trade would probably lean in favor of the Mets. However, getting, three years of Davis or four of Duda for one of Aoki sounds not too shabby for Milwaukee. It will take away some of the depth the team has in the outfield, but has the potential to solve the first base problem. Unless the team is absolutely going to make a big effort to re-sign Aoki or can get a better deal elsewhere, this kind of trade makes a good deal of sense for the Brewers.

Such a trade would also mean the Brewers will seriously attempt to play either Ryan Braun or Khris Davis in right field. Or give Caleb Gindl/Logan Schafer a shot. Or both. Braun and Davis in left/right field means gold glover Carlos Gomez (who won a gold glove) will really have to put his gold glove skills to the test.

Both the Brewers and Mets may also feel they can get more for their respective players and will test the trade market first. Still, New York and Milwaukee nearly fit like two pieces of a puzzle when it comes to surpluses and weaknesses. A trade between the two is hardly far-fetched.