The fifth longest homer of 2013 was a blast to rival your Fourth of July celebrations.

Juan Francisco hit 13 home runs as a Brewer in 2013, and five of them came in a span of nine games between June 25 and July 5. The biggest of those hits was the last one, which came against Zack Wheeler and the Mets.

The Brewers were already trailing 7-2 when Francisco led off the bottom of the fourth, worked a full count and did this with the 3-2 pitch:

The payoff pitch was the only certain strike Francisco saw in the at bat, but it was a great pitch to hit: It was clocked slightly below 97 mph and this is the location: 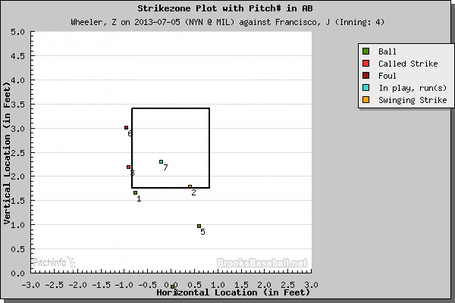 The homer was Francisco's longest as a Brewer at 433 feet, but it was only his second-longest of the season: On April 10 as a member of the Braves he hit this 459-foot blast off Alex Sanabia and the Marlins. I love that highlight, if only because Braves announcer Chip Caray exclaims "That one's got a chance!" a split second before the ball caroms off the upper deck in one of baseball's largest stadiums. It was the second longest homer hit at Marlins Park in 2013.