Khris Davis' rapid ascent through the organization in 2013 is one of this year's best stories. He came out of nowhere to win a spot on the Opening Day roster and struggled in limited playing time in April, but really came into his own in a return engagement with the Brewers in the second half.

Between July 23 and August 23 Davis appeared in 23 games and hit .386/.455/.860 with eight home runs, including one of the longest of the season. On August 15 he plated the only Brewers run in a 2-1 loss to the Reds, hammering this pitch against rookie Tony Cingrani:

Davis may not always look the part of a future big league slugger, but power like that certainly turns some heads. That ball traveled 434 feet, and was the second longest homer hit by a Brewer at Miller Park in 2013.

Usually when we discuss a mammoth homer like this, the pitch turns out to be a meatball over the center of the plate. This one is a bit of an exception, as it was a 92 mph fastball over the outer third of the strike zone: 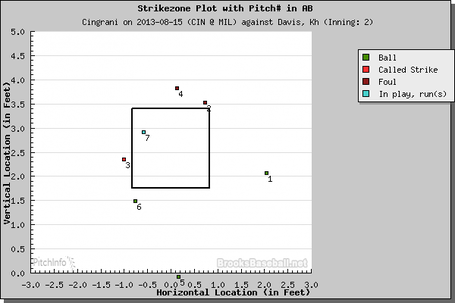 That was the fifth of eleven 2013 home runs for Davis, and the Brewers are counting on him to hit many more as he slides into an everyday role in left field next season.