Weeks turned a BP fastball into a memorable moment on May 15.

Here's something you've probably already heard: Rickie Weeks had a very disappointing 2013 season. After hitting 20 or more home runs in three consecutive seasons, Weeks was held to just ten this season. On May 15, though, he hit one that was almost long enough to count for two.

The Brewers trailed 2-0 in the seventh inning against the Pirates when Wandy Rodriguez served Weeks a first pitch meatball, and Rickie was all over it:

That ball traveled 430 feet, which would only have been Weeks' fifth longest homer in 2012 but qualifies as his biggest blast of 2013. Wandy Rodriguez also deserves credit for the assist here: The pitch was an 84.2 mph changeup, and here's the location: 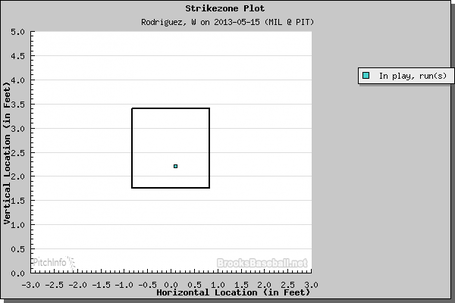 This was only Weeks' third home run of the season, and the only one he hit in the month of May. He would later hit five more in June and two in July before going on the shelf.