Aramis Ramirez has developed a reputation for being something of a slow starter, but what can we actually determine from his April statistics?

Last weekend, Adam McCalvy tweeted something that caught my attention:

Aramis Ramirez says he & RRR are brainstorming ways to help Ramirez break his annual April funk. Time to try something different, he said.

Originally, this seemed like a really bad idea to me. I understand that the Brewers would prefer to have Ramirez perform consistently throughout the season rather than have very good months and very bad months, but for his career, Ramirez has been an above-average MLB hitter and it seems foolish to me to mess with a good thing.

Then I started to think even more about the phrase "his annual April funk". At this point, an awful April from Ramirez is not a concern, but rather an expectation. It has transformed from a random occurrence into something much larger and when these oddities develop into narratives and finally fully mature to the point of acceptance, I become very suspicious. There is no way that a statistical occurrence as random as an above-average hitter being incapable of hitting well during a 30 day period every 365 days can actually exist. So, in an attempt to disprove "Ramirez’s annual April slump", I decided to take a closer look at Ramirez’s performance during the month of April during his career.

When I first started this piece, I took a look at Ramirez’s most basic career splits and found that he did indeed struggle during the month of April. For his career, Ramirez has recorded his worst monthly batting average (.257) and on base percentage (.328) during the first month of the season, but I decided to dig a little bit deeper and take a look at his annual April statistics. 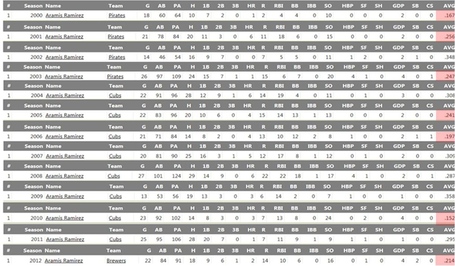 Taking a look at each of these months reveals that Ramirez does not actually hit terribly every April. There have been multiple years in which Ramirez has been avoided an April slump and contributed to his club. Isolating each of the seasons will show that Ramirez actually struggled during 2000, 2001, 2003, 2005, 2006, 2010, and 2012, but was an average to above-average hitter in 2002, 2004, 2007-2009, and 2011. So, in reality, Ramirez has only struggled in April 50% of the time, but when he does struggle, he does so mightily. To understand why Ramirez struggled in the Aprils that he did struggle, I looked at his batted ball and plate discipline statistics in each of these months. 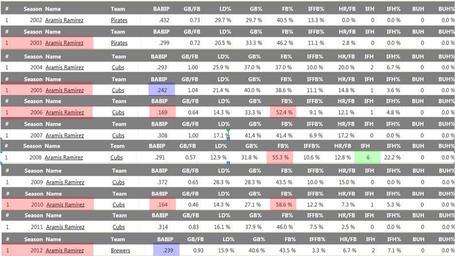 (Disclaimer: Fangraphs batted ball statistics only goes back to 2002. I likely wouldn't have included 2000 in my breakdown anyways though. Since it was Ramirez's first full season, it would have been more likely he was struggling because of a lack of experience rather than some inability to hit a baseball in the month of April.)

One thing that really stuck out to me when looking at the batted ball statistics was Ramirez's BABIP in the years that he struggled. In 2006 and 2010, Ramirez posted absolutely anemic BABIPs (.169 and .164 respectively) during April. In those two seasons, you will also see a very high percentage of flyballs. During the span I was able to breakdown (2002-2012), Ramirez has hit fly balls roughly 46% of the time, but in three separate seasons (‘06,'08,'10) Ramirez experienced a significant increase in his fly ball percentage. When his fly ball percentage increases significantly from this percentage, Ramirez tends to struggle. Though not nearly as bad as 2006 and 2010, Ramirez's BABIP in 2005 and 2012 leaves a lot to be desired. These two bad BABIPs are likely more a function of bad luck than a certain negative trend in Ramirez's batted balls. Though Ramirez may have been unlucky in '05 and '12, he was unbelievably lucky in '08 when he legged out six infield hits. Yes. Aramis Ramirez hit six infield singles in April 2008. 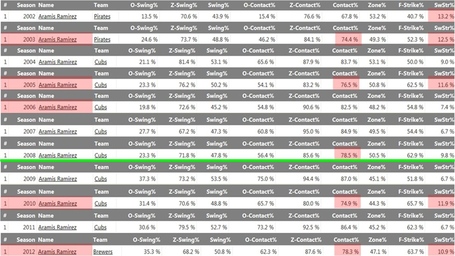 (Here is a link for a quick primer on plate discipline statistics.)

A closer look at these annual statistics shows that Ramirez’s approach as a hitter has changed year-round, not just in the month of April. In the last four years, Ramirez has started to swing at considerably more pitches outside of the strike zone. In 2009, Ramirez set a new career high in this aspect of his game, swinging at 31.5% of pitches outside of the strike zone, which increased to 33% in 2010, and finally to 37.2% in 2011. This number decreased to 36.2% last season, but this is still a full 10% higher than five years ago. With practice comes success and thus Ramirez has started to hit these pitches a bit more consistently, which has allowed him to remain an effective hitter, albeit a changed one.

Now, when looking at Ramirez’s success in April, the two statistics I believe to be most telling are Contact% and Swinging Strike % (SwStr%). These stats may help you break down his swing better in hindsight than in the moment, but looking back at the stats can show you when Ramirez is really struggling as a hitter. On the above chart, you will see Ramirez made contact with less than 80% of the pitches he swung at in’03, ’05, ’08, ’10, and ’12. Besides ’08 (an April in which he benefitted from 6 infield hits), Aprils in which Ramirez made below-average contact have been months he has struggled in. Another telltale stat for Ramirez in April is Swinging Strike %. When Ramirez’s SwStr% is higher than 10% in the month of April, he tends to struggle as well. This occurred in ’03, ’05, ’10, and ’12.

Here is what we learned: