Who Is Jean Segura?

What, if anything, do we know for sure about the Brewers' young shortstop?

Share All sharing options for: Who Is Jean Segura?

EDITOR'S NOTE: Today I'm pleased to introduce Eric Nehm as the first new BCB contributor from our recent tryout project. His first post as a full-time member of the site is below. - KL

Who is Jean Segura?

This is the question I attempted to figure out the last couple days and honestly I still have no idea. Going into this piece, I knew I would likely find very few answers that would help me accurately project Jean Segura's future, but I was just too curious to stop myself from at least trying.

When taking a look at Jean Segura's stats as a batter from this past season, you will find a pretty mediocre hitting shortstop. For the two months that he was on the Brewers, Segura hit .264/.321/.331. Obviously, his stats weren't overly impressive, but they were particularly interesting. Though Segura didn't show a whole lot with the bat as the Brewers starting shortstop, he did create some very interesting splits.

Part of the difficulty in making any sort of projection or drawing any definitive conclusions for Segura was dealing with miniscule sample sizes. Such a small sample size will lead to some extreme numbers that are unlikely to be sustained over an entire season. (In his 43 PA against LHP, Segura also collected 6 BB. So he probably doesn't struggle at all against lefties, but there is just too small of a sample size to make any sort of definitive statements.)

You'll likely also notice Segura's home/away numbers. At Miller Park, Segura was only able to post a triple slash of .181/.253/.208. On the road, he was considerably more successful, posting a triple slash of .329/.372/.430. Once again, this may be more of a quirk in the numbers than an actual trend considering Segura only had 79 plate appearances at home and 87 plate appearances on the road, but it may be something to keep an eye on.

The third and final split you will notice is Segura's monthly split. In Segura's first month as a starter in August, he hit .209/.250/.239 with only one extra base hit and four walks. For the most part, Segura struggled and found little success at the plate.

Things did improve in Segura's second month though. In his second month as a starter, Segura hit .309/.378/.407. With such a bad first month, it was extremely encouraging to see Segura swing the bat with a little bit more confidence. In the final month of the season, Segura was also able to collect six extra base hits (4 2B and 2 3B) and 9 BB.

Let's take a closer look at Segura's batted ball information in these two months (August on top, September/October on bottom):

These numbers help show why Segura was a bit more successful in his final month of the season. Notice that both Segura's line drive percentage (LD%) and fly ball percentage (FB%) increased, while his ground ball percentage (GB%) decreased. These are all positive signs going forward, but even with his success in the final month, I would argue that there is still plenty of reason for concern regarding Segura.

Here is Jean Segura's spray chart from this past season: 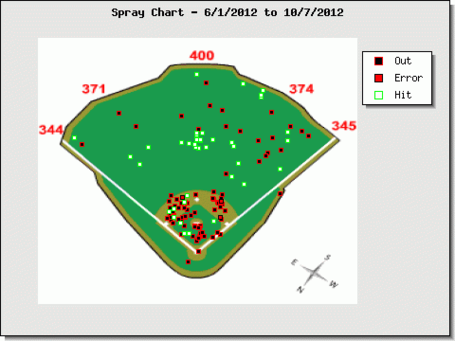 There are a few things that really stand out on this chart. Segura doesn't pull the baseball with any sort of power. You will see the biggest collection of dots on the left side of the infield. Not the left side of the field. Just the infield. He simply wasn't able to turn on balls with power last season. This is concerning, but not necessarily damning of Segura's future success.

Looking at the raw numbers (pull/center/opposite) of the above spray chart really illustrate Segura's struggles as a hitter. To left, Segura hits .250. To center, Segura hits .333. And finally, to right, Segura hits .323. These numbers are pretty unusual when comparing them to most major league hitters. A large majority of major league hitters do a majority of their damage pulling the baseball. For example, here are the numbers for two of the Brewers best hitters, Ryan Braun and Aramis Ramirez (from LF to RF): .443/.402/.371 and .413/.329/.277. Obviously, I don't expect Segura to ever be on the same level as either of those two hitters, but I thought it would be helpful to give a little context to his hit distribution numbers.

Now, there are certainly examples of batters that are "opposite field hitters" and post higher BAbips when they hit the ball to the opposite field rather than when they pull the ball (Ryan Howard comes to mind), but I'm not so sure Jean Segura is one of those players. I believe Segura hit the ball to the opposite field at a high rate because he had yet to adjust to major league pitching. This is also why I believe Segura struggled to pull the ball with any consistency this past season. He simply hadn't caught up to the high level of pitching at the major league level.

(As an aside...Trying to find comps for players is something some people find very useful and others find extremely useless, but for those interested I took a look at rookie shortstops in their age 22 seasons in the last twenty years. Of the eighteen seasons listed, Segura found himself in the bottom half in terms of BA, OBP, and wOBA. Taking a closer look at the batted ball profile of each player revealed the most comparable season belonged to Everth Cabrera in 2009. Like Segura, Cabrera struggled pulling the baseball in his rookie season hitting (from LF to RF): .307/.324/.373. The worrisome part of comparing Segura to Cabrera is Cabrera's batted ball tendencies have yet to change. To this day, he still struggles to pull the ball and hits the ball to the opposite field a majority of the time.)

After taking a look at the numbers, I think it's safe to say Brewers fans will find a very different shortstop than the one they had last season. Jean Segura will no longer post a batting average of .081 against LHP. And he will no longer hit .181 at Miller Park. Will he hit .309 like he did in the last month of the season though? That is still up for debate. I, for one, don't think Segura will be able to be an above-average hitter without first figuring out how to pull the ball with some sort of success.