Let's continue our conversation on Lohse today with a look at what this decision means for the Brewer front office.

Share All sharing options for: Kyle Lohse, Doug Melvin and the four decisions

I've had this conversation privately with many of you over the years, but to the best of my knowledge this is the first time I've attempted to present it in graphical form.

In any job where you make high profile decisions, like General Manager of an MLB team,* there are four kinds of decisions you can make. With apologies for the crude nature of the artwork, I've attempted to illustrate them below. 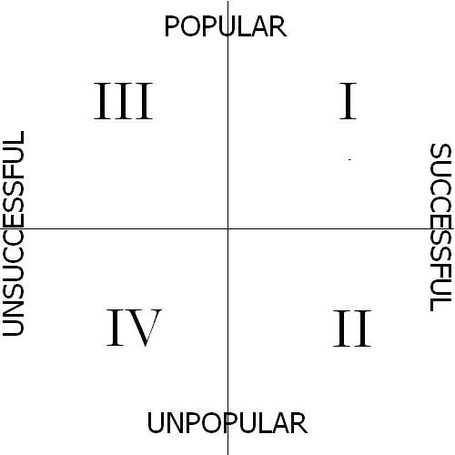 In the top right (labeled "I") of the graphic above we find the obvious preferred decision. Management that makes popular decisions and has them turn out well ends up being seen as listening to the right people and getting results. And since those people are us, we're all happy.

The bottom right (labeled "II") is a little riskier, but may actually carry a higher reward. Making decisions that aren't popular at the time but end up working out earns you labels like "visionary." For an example, look at Brian Sabean with the Giants. A few years ago he was the butt of jokes about his excessively veteran roster and methods, but now that he's won two of the last three World Series you don't see people making fun of him anymore. He's earned that free pass.

Moving back to the top, the northwest corner ("III") may not be successful, but it at least leaves you some cover. If you do what everyone thinks you should do and it doesn't work out, some people will give you a free pass because they'll feel they wouldn't have done better. Some will forget they were on your side in the beginning, of course, and some will blame you because you should've known better. Managers still sometimes get fired in this quadrant, but when they do someone usually comes forward to say it wasn't their fault.

The bottom left ("IV"), of course, is where trouble starts. When you make a decision that's not popular at the time and it doesn't work out, it opens the door for second-guessing and leaves a stain that your detractors won't forget. Penciling Mark Kotsay into an NLCS lineup card in center field was really only one decision, but we're over a year removed from it and I know some people are still angry at Ron Roenicke for allowing it to happen.

Decisions like #4 are the kind that end up scrawled on your managerial tombstone. Years after the fact I still remember the times Ken Macha batted Jason Kendall and his sub-.600 OPS in the leadoff spot or when Ned Yost put Greg Aquino into a key spot because he "fields his position well."

Those are managerial and not general managerial examples, of course, but I think the point holds: if you're going to make an unpopular decision, it had better work.

And now, almost 500 words in, I've reached my point. Yesterday I wrote that the Lohse signing was the least excited I've ever been to announce a free agent acquisition. Based on the comments, a fair number of you are also unimpressed with the latest veteran addition on the wrong side of 30. I'm guessing most of us would be happy to be wrong and have Lohse be a productive member of this team for the long term. Many of us would even settle for a break-even scenario, where Lohse has some success in the short term that we can use to justify the team still paying him during his decline.

If Lohse comes out and lays an egg, though, it's not going to take long for the crowd to turn on him and the organization that signed him. And if his long-term financial commitment makes it hard for the Brewers to patch other holes in the team going forward and/or retain some of their homegrown stars, then the bad decision will compound itself.

Simply put, Doug Melvin and the Brewers have tied themselves and their reputations to this one. For everyone's sake, I hope it works out.

* - I know it's a widely accepted theory that Mark Attanasio, not Doug Melvin, made this decision. I haven't seen that confirmed publicly, though, so for the sake of this conversation I'm lumping it in with other decisions made by the usual baseball people.