Friday's Frosty Mug: A Day Off To Discuss Off Days

Share All sharing options for: Friday's Frosty Mug: A Day Off To Discuss Off Days

Some things to read while furthering your career.

The first off day of the season could not have come at a worse time for John Axford, as the Brewers' lack of activity yesterday allowed conversation about his early struggles to spill over into a second day. Ron Roenicke Stole My Baseball and James Anderson of Disciples of Uecker are calling for Axford to be removed from the closer role, while Justin Schultz of Reviewing the Brew took fans to task for the way they've responded to Axford's performance.

I'm not sure where I stand on this issue, I'm just sad that it's already reached this point after three games.

That conversation made today the perfect time for Jon Roegele of Beyond the Box Score to post a study on pitch location and velocity for closers. The study shows Axford as something of an outlier on a graph combining those two factors, as shown below: 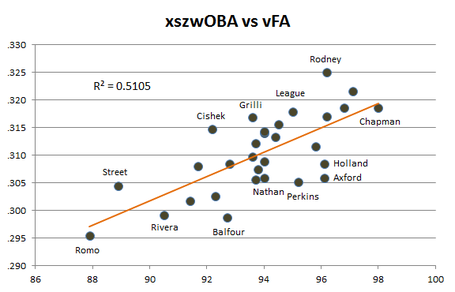 I emailed Jon this morning to ask what that means, and here's what he told me:

Since Axford is below the average line, this means that he either throws harder than average for a closer that locates the ball within the strike zone as well as he does, or else you could say that for how hard he throws, he locates the ball within the strike zone better than the average closer. All of these numbers were from 2012. (And yes, I know, he gave up lots of HRs and blown saves)

So, for what it's worth, you could actually make an argument that Axford's control is better than you'd expect, given his velocity. I thought that was interesting.

Turning our attention back to the present, the Brewers open another home series against the Diamondbacks tonight and Kyle Lohse is scheduled to make his Brewer debut. AZ Snakepit has a pretty thorough preview of the series and Miller Park Drunk's weekend edition of Homestander is loosely based on the series too.

Mike Vassallo notes that Lohse received a no-decision in his first appearance as a Twin, Red, Phillie and Cardinal. That trend is likely to continue tonight, as Jay Sorgi of WTMJ talked to Doug Melvin and learned that Lohse is only expected to throw 70-75 pitches. Meanwhile, earlier this week the Brewer organization said they couldn't understand why fans weren't banging down the door to watch this game.

Lohse was probably only in position to sign a big contract this spring because of a relatively obscure procedure he had performed on his throwing arm in 2009. Tom Haudricourt has more on the odd injury that led to the surgery and Lohse's bounce back from it. More recently, MLB.com has a look at his unusual offseason.

If you're not interested in paying to see Kyle Lohse tonight, maybe you'd like to see a red-hot Rickie Weeks instead. He's hitting .545/.643/.909 after three games and leads all major leaguers with five runs scored, and Larry Granillo of Baseball Prospectus notes that he rounded the bases in 23.63 seconds following his home run on Wednesday.

Looking back on the last few days, Dave Radcliffe of Yahoo has pros and cons to take away from the season's opening series. Tom Stadler of The Book of Gorman named Alfredo Figaro the series MVP.

If you're heading out to Miller Park tonight or this weekend, try this out and let us know what you think: John Steinmiller and Caitlin Moyer have a review of the smoked pork chop and beer can chicken from Ribbie's Cafe.

If you weren't around the site yesterday you might have missed Part Two of Nathan Petrashek's interview with Jeff Passan of Yahoo Sports, which focused on Ryan Braun. Regardless of what you think of Passan I highly recommend this interview, as Nathan did a great job of asking insightful questions and clarifying some of Passan's earlier remarks.

Also, mark your calendar for April 13 and plan to join us to watch the new movie "42" and hang out to watch that afternoon's Brewers/Cardinals game. Follow this link for details and to RSVP.

If you'd like more Brewer coverage today but you're sick of reading, I'll be making my 2013 debut on The Home Stretch with Justin Hull on 95.3 FM WSCO in Appleton at 2 pm today. I'll be live in-studio taking your calls and questions, so tune in and get your voice heard.

The Brewers may have been off yesterday, but three NL Central teams were in action:

The Reds and Cubs' wins dropped the Brewer playoff chances from 23.7% to 23.4%, according to CoolStandings.

If this had turned out a little differently, today everyone would be talking about plays at the plate again. New Nationals superstar Bryce Harper avoided injury but was involved in a scary moment when he took an elbow to the face in a home plate collision yesterday. I learned about it via Nats Enquirer, who had a link to the MLB.com video.

Finally, before I wrap up for today I wanted to take a moment to mention this: A while back I mentioned a great piece of art by Jess Lemont, who occasionally comments here as Jess'HitheBall. Her piece, titled "Racing Sausages Beneath a Waxing Gibbous," is now available as a print via Society6.com, and I'm looking forward to having one to hang in my office.

This morning's edition of Today In Brewer History marks the second anniversary of a 1-0 win over the Braves in 2011 where Yovani Gallardo pitched a shutout and scored the Brewers' lone run. Today also would have been 1901 Milwaukee Brewer Wid Conroy's 136th birthday, and Plunk Everyone notes that his 35 career HBP are the most ever for a player born on April 5.

Now, if you'll excuse me, I'm listening to the wizard.