Milwaukee's 27-year-old center fielder is in the midst of a career season. What's made this possible isn't all that complicated.

At one point, it seemed everyone and their brother had something to say about Carlos Gomez's approach at the plate. "He's not very disciplined," they said. "There's just too many holes in his swing," they added. "He needs to shorten up and stop swinging for the fences," they asserted.

To a point, these statements were appropriate.

After breaking onto the scene as a 21-year-old with the New York Mets in 2008, Gomez's replacement-level offensive production commenced. That year, he hit just .232/.288/.304 in 58 games and was promptly traded to the Minnesota Twins the following off-season in a package deal for Johan Santana. No one blamed the Mets for parting ways with Gomez, who had performed underwhelmingly at the plate in his first major league stint.

Any regret that lingered in New York's front office the following season ceased to exit after Gomez, though somewhat improved, posted similar numbers in his first campaign with the Twins. Starting 153 games in center-field, Gomez slashed .258/.296/.360 and maintained a weighted on base average of just .291. Nevermind that he was arguably the best center fielder in baseball, garnering a 17.9 ultimate zone rating that topped all players at the position; his hitting was still well below major league average, and that was enough to stall his attainment of each of the five important tools.

Gomez's offensive production would regress even further the next season in Minnesota. And then, for the second time in the span of three big league seasons, Gomez was shipped to another organization, this time to Milwaukee in return for then starting shortstop J.J. Hardy. At that juncture, it seemed no team in their right mind would willingly start Gomez in center-field on opening day or, quite frankly, any other day.

Splitting time as the starter in center field for the Brewers for his first two seasons, Gomez's struggles at the plate appeared once more. Averaging 96 games played per season during that span, he hit just .238/.288/.377. High strikeout rates and low walk totals limited his ability to get his shot at a starting role.

And that's exactly what he did.

A strong showing in spring training granted Gomez the starting role in center field for Milwaukee to start the season. But like past season, the 27-year-old dug himself a sizable hole -- going 2-for-19 with three strikeouts, no walks and just one extra-base hit in his first five games. It seemed that history was almost destined to repeat itself.

And then a funny thing happened -- he became the hottest hitter in baseball.

Since recording his first multi-hit game of the season in going 2-for-6 with an RBI April 7 against the Arizona Diamondbacks (26 games and 104 plate appearances ago), Gomez boasts a .442/.490/.779 slash line with six home runs, eight doubles, two triples, 21 runs scored and 13 runs batted in.

His scorching production at the plate has made him one of the elite and well-rounded hitters in the game. Coming into action Friday night, Gomez owns the National League's best wOBA (.471), batting average (.386) and slugging percentage (.675), and according to Baseball Prospectus, he is the Brewers' most valuable offensive player with a 1.7 BWARP. Possibly the most impressive statistic for Gomez his season, his .431 on-base percentage ranks in the top-10 in baseball, as well.

Given all this, it's easy to look at the generic offensive numbers and conclude that Gomez is, indeed, improving at the plate. But to gain a better understanding, we must delve further into his improvement.

One thing Gomez has received flack for over his career has been his inability to spread the ball to all fields, and this was no more obvious than last season. Though he hit a very nice .426/.426/.780 to his pull-side in 2012, Gomez struggled finding holes in right field and furthermore putting the ball into the right field gaps, as evidenced by a lackluster .246/.243/.406 slash line.

As the chart indicates, Gomez has become much more than a pull-hitter, at least so far this season. He has spread the ball around to all corners of the field, and there is no portion of the chart where he has concentrated his hits. Sure, he has had his fair share of ground-outs to shortstop (every player does), but even when he doesn't manage to hit the ball out of the outfield, hits have come in the form of infield base-knocks, of which he has seven thus far.

But how has this all been made possible? All signs point to an improvement in plate coverage.

The picture below portrays Gomez's 'heat map' this season with respect to batting average (courtesy of ESPN.com). As the key indicates, the red portions of the map are those in which Gomez is batting higher than .300; the opposite shows where he is batting lower. 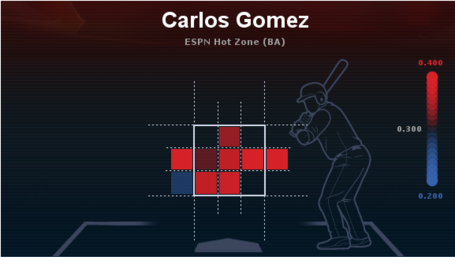 As the plot shows, Gomez has been able to reach nearly every corner of the strike-zone this season. Among other things, he has not relied upon inside pitches to order to get his hits. Rather, he has thrived off the low-and outside corner of the strike-zone, and that coupled with improved patience at the dish may be the biggest reason as to why he's been able to spread the ball too all fields.

But what exactly does patience have to do with it? While there is no one definite metric capable of contextualizing patience, there are resources that can help us draw conclusions.

For much of his career, Gomez has received flack for his lack of patience at the plate; indeed, he has never one to be very selective from at-bat to at-bat. He has been criticized for swinging at pitches out of the strike-zone at a much too high rate and has been tagged as a guy who just swings and misses too often. But while that still may be the case, to a point, one can't help but notice his improvements. The chart below illustrates that fact.

Though Gomez has seen essentially the same amount of strikes (47.5%) this season compared to last (47.4%), he is putting those strikes to greater use this time around. He is making more contact on strikes (86.6%) in 2013 than he did in 2012, despite that he is actually swinging at less strikes than last season. That could mean he is becoming a more selective hitter within the zone, something that he has (as already mentioned) never been known for. He is also swinging and missing less this season and is pulling the trigger on non-strikes at a lesser rate this season, as well.

Considering everything, Gomez has seemingly turned an important corner in his professional career. He is becoming a more selective hitter at the plate, has augmented his plate coverage improvements, is spreading the ball to all fields and has consequently become one of the best hitters in the game this season.

Maybe it's time for his detractors to rethink those questions.