An in-depth look at the surprisingly burly bat of Milwaukee's 23-year-old shortstop.

These are the words that Milwaukee Brewers fans have spoken time and time again this season, though not because of how well Greinke performed with the team during his tenure from 2010 through 2012 (he went 25-9 with a 3.67 ERA over 49 starts), but rather for what the Brewers were able to get in return for Greinke: Jean Segura.

The centerpiece of the deal that sent the aforementioned Greinke from the Brewers to the Los Angeles Angels three days before last season's non-waiver trade deadline, Segura, along with minor league pitchers Johnny Hellweg and Ariel Pena, were supposed to help bolster a weakened Milwaukee farm system. Each were dubbed as top-10 prospects in the Angels' system prior to the 2012 season according to Baseball America, so it seemed they would be able to do just that.

But Segura has done much more.

After making his debut with the Brewers' double-A minor league affiliate Huntsville Stars on July 29, going 2-for-4 with two runs scored and a stolen base, it took the young 22-year-old shortstop just seven more games to be recalled from the team to make his big league debut August 6. Segura became the club's de facto starting shortstop from that juncture until the end of the season and in turn gave fans reason for optimism.

Yet while his hustle, upbeat and sparkplug demeanor won the attention of fans, his bat did quite the opposite. Many held reservations about Segura's big league potential after he batted .264/.321/.331 with just seven extra-base hits (none of which were home runs) over 44 games with Milwaukee after his big-league promotion. His glove and base-stealing prowess portended signs of a future five-tool player, but his still developing contact and power at the plate lagged behind.

In an article published on the Brewers' official website on March 4, Bernie Pleskoff, a former big league scout, said that Segura's power was the only thing still underdeveloped.

"Because of his existing strength and the potential of more muscular development," Pleskoff said, "I think Segura can gain a big more power in the future. Perhaps those 10 home runs at Cedar Rapids (in 2010 with the Angles' class-A affiliate) weren't such a fluke. That current lack of raw power may be the only thing that keeps Segura from being a true five-tool player."

Maybe Segura took those words a bit too seriously, because after hitting .367/.377/.550 with five doubles and three triples over 21 spring training games, he is proving that he does have enough power to be an offensive catalyst in Milwaukee's lineup.

After a scorching weekend series in Cincinnati, Segura boasts a .359/.406/.588 slash line, tallying six doubles, three triples and -- get this -- six home runs. The number to pay attention to here is his .588 slugging percentage, which ranks second-best among all shortstops. Furthermore, his .229 isolated power rating is third-best and his weighted on-base average is at .442, which ranks ninth-best in baseball, ahead of players such as Bryce Harper and Prince Fielder.

Where exactly has this 'power binge' of sorts come from? One look at the graph below (courtesy of ESPN), which illustrates Segura's hot zone for slugging percentage this season, could answer that question. 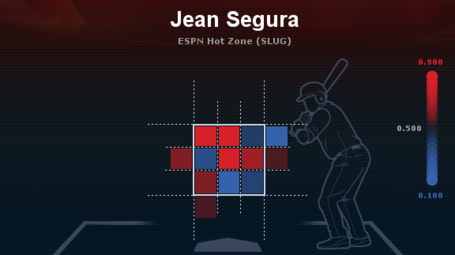 As you can see, Segura has thrived off most pitches belt high and above, and has been particularly successful with high-and-outside offerings considering his opposite-field first approach at the plate. Low and inside offerings will still need improvement, but who can complain with his power numbers thus far?

But while overall power numbers are nice to gawk at, we wanted to delve into the specifics of Segura's home run binge. Are there any noticeable trends in which offerings he has converted into home runs? Where are these offerings located? Let's answer each question by looking at each individual home run. 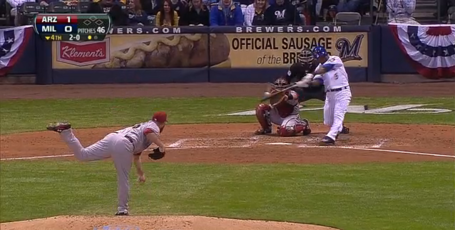 The two charts above depict where the pitch was located when Segura made contact with the ball as well as where it was hit relative to the ballpark's dimensions. The picture below the graphs shows Segura's contact point. With a stiff front leg and bent back leg, Segura gets full extension of the bat head and drives the a two-seam fastball to center field. Notice his head is on the ball at the point of contact. 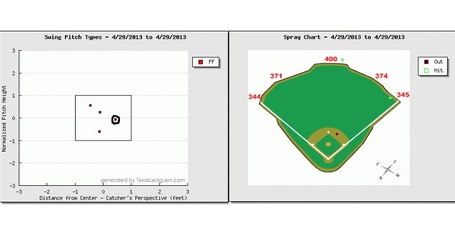 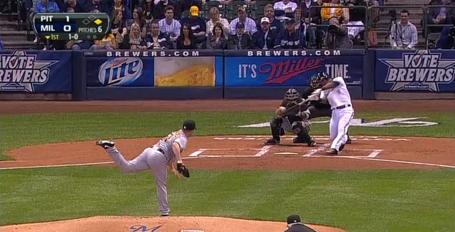 Segura put three of the four four-seam fastballs that he swung at in play, and as we've seen him do for most of this year, his home run came off a belt-high offering slightly off the center of the plate. Head, front leg and hips exactly where they should be. 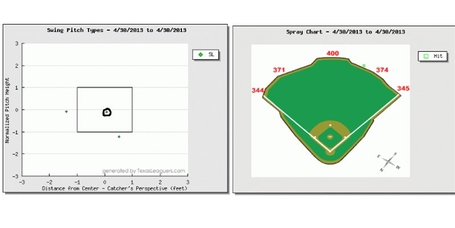 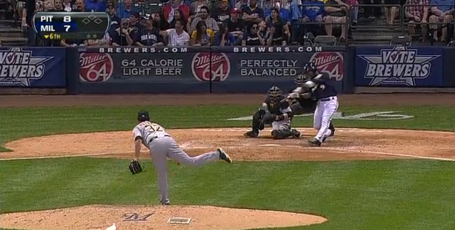 This home run is unique in that it is the only off-speed offering Segura has put over the fence this season; the rest have come on varations of either four, two-seam or cut fastballs. As you can see, Segura's mechanics are where they should be, although his torso is bent over some, likely due to the fact that the offering was a slider, which may or may not have caught him off-guard. It probably didn't though, as he put if over the fence, and that's all that counts in the end. 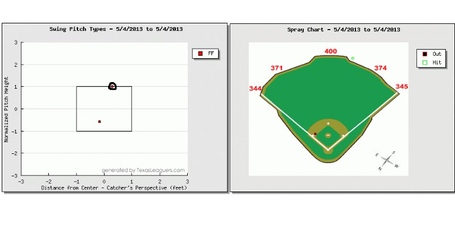 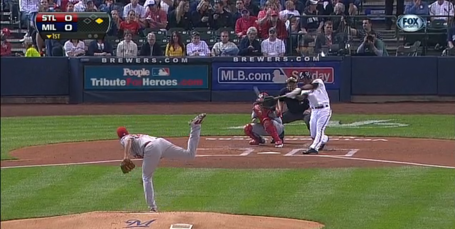 Another high-and-outside fastball, another home run for Segura. Not even Adam Wainwright can get away with leaving a four-seam fastball in Segura's wheelhouse. Mechanics: check. Picturesque swing. 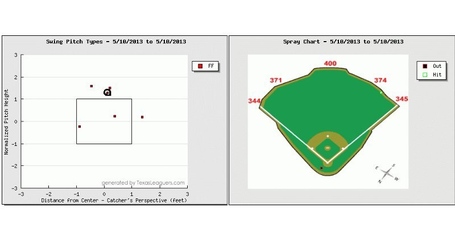 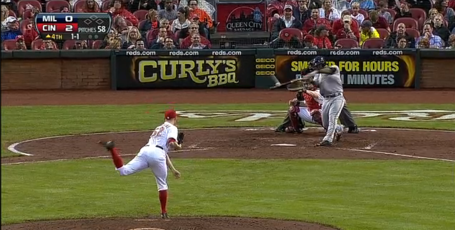 Tony Cingrani forgot the golden rule: Never leave a fastball high-and-outside to Segura, because he'll put it over the fence, as we all saw Friday night at Great American Ballpark. Again, Segura shows his uncanny ability to get the bat head out at the ideal angle (to generate backwards spin on the ball) even on pitches at shoulder level. Unbelievably good piece of hitting. 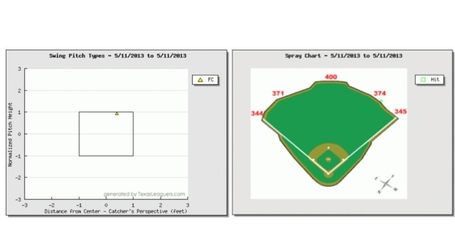 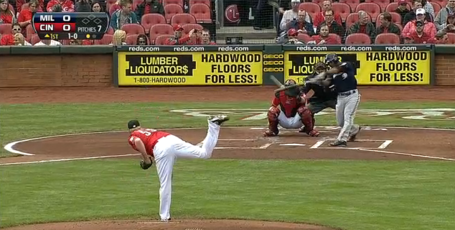 It's getting redundant at this point, but it's worth re-noting: Segura yet again flashing superb bat control, lower and upper body mechanics at the point of contact, on a high-and-outside cut fastball no less. It seems pitchers will have to learn the hard way.

All but one of Segura's home runs this season have come off some variation of fastballs on the outer portion of the plate, the lone exception being the slider he hit out April 30 at Miller Park, although one could argue that it was outside, as well. If pitchers want to get past Segura's spot, they'll have to realize that is not the pitch or the location to do it with.

Next time you tune into the Brewers game, keep these things in mind.