Rickie Weeks' greatest talent is going the way of the Polar bear. They're dying out, right?

Share All sharing options for: Rickie Weeks and regressive plunking

He is a notorious plunkee, so is the declining rate part of a larger trend, and could it be attributed to his recent decline in production? 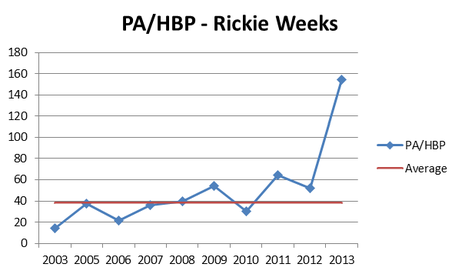 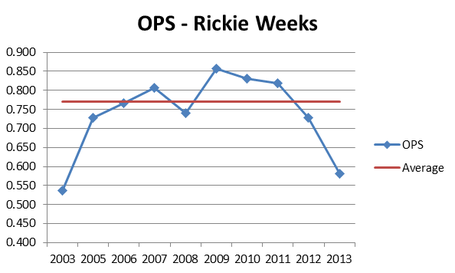 2008 in this context can be considered Weeks’ most typical season, with both PA/HBP and OPS falling very close to career averages (Slash line – .234/.342/.398, very Weeksian). 2010 is Weeks’ best season not only because of his career highs in just about every counting stat. His incredible plunk rate (about a plunk per 30 PAs) was succeeded only by his prodigious 2006, in which he was plunked 19 times in 413 PA (95 games). That’s a plunk every 22 PAs!

After the 2010 bludgeoning, Weeks followed with a strong campaign in 2011 despite a significant decrease in plunk rate, but has since fallen off in production quite dramatically. 2012 saw a small uptick in plunking, but still not to his career average – this was accompanied by a significant decrease to a below-average OPS. Of course, 2013 has been a sad story on both fronts, as not only is he not hitting – he is not getting hit.

Weeks’ 2010 and 2011 are perfect for this analysis. He had very similar success despite very different plunk rates. How do the plunkings relate to his 2010 success, if at all? If so, how did he manage a similar OPS in 2011 despite his plunk rate plummeting by more than half?

His spray charts are impressive (2010, 2011), and are somewhat hard to believe given what we've seen lately; he shows as a bit of an all-fields hitter, with mostly pull power.

As a right-handed hitter with above average pull power, Weeks is predictably worked low and away most of the time. However, I found a key difference in his pitch f/x data which may indicate why his plunkings may be declining.

As we expect, most of his swings out of the zone are low and away on breaking pitches. However, notice the discrepancy off the inside part of the plate. While Weeks saw, and therefore swung at, fewer pitches in 2011, the concentration of pitches swung at off the outer edge are somewhat comparable, but there are noticeably fewer instances of swinging off the inside corner.

In 2012 Weeks’ plunk totals rose once again. Let’s take a look at what he was swinging at:

Not a whole lot off the inner edge, although what he did swing at was pretty far inside. Of course, these measurements aren’t perfect; Weeks’ left knee is about a foot from the inner black of home plate, so I have no idea how he could have swung at a two-seam fastball that supposedly ran about two feet behind it.

Now, the swing chart so far this season:

Well, that’s something. Apart from a couple borderline pitches just off the inside corner, Weeks has only swung at two definite balls off the inside part of the plate. In 2010 and 2012 – years of terrific plunking – Weeks showed an occasional willingness to swing away at a pitch off the plate inside. In 2011 and so far in 2013, not as much.

It's also worth noting that Weeks has become more and more pull-conscious since his breakout year in 2010. His 2012 spray chart is less concentrated in right field and 2013 is basically a dead sea everywhere, but particularly dead in right field (I'm focused mainly on hits here).

Perhaps the catalyst for the Weeks plunk is the pitcher’s belief that Weeks will swing and miss at a ball inside off the plate. Because pitchers are aware of his pull power, they don’t want him swinging at something they offer inside unless it’s so far off the plate he can’t square it up. And if he’s never swinging at that pitch, then why even bother? It's not worth the risk of leaving a mistake pitch middle-in if the only other possibility is hitting the spot off the plate with the batter almost assuredly not swinging at it.

So a pitcher is more likely to throw the ball on the outer half and either elevate with velocity or descend with breaking stuff. Because Weeks isn’t as willing to go the other way as he was in the past, he’s either taking more often in hopes of getting a free pass, or trying to pull a ball out away from him, which is difficult no matter how close to the plate he stands. If Rickie cannot figure out a way to handle the pitch away, there is little reason for a pitcher to even bother coming inside, even if it’s off the plate.

Rickie was not handling it last season. Through the first three months he was plunked 5 times with a nearly identical slash line of .183/.303/.306. The next two months he was plunked 8 times and hit .276/.369/.469. If and when he does start handling it, coming inside will be a real challenge, because anything he's swinging at in there is probably a strike - and right in his wheelhouse. While plunks may not be directly indicative of success, it means he’s getting pitched inside more often because he’s proven he can handle the pitch away. Which means Rickie is a happy hitter. And we’re happy fans.