A weekly reminder that the things our brain tells us seems true are sometimes super true.

Share All sharing options for: The Week in Confirmation Bias, 6/10-6/16

Confirmation bias - "a tendency of people to favor information that confirms their beliefs or hypotheses. People display this bias when they gather or remember information selectively, or when they interpret it in a biased way." (Wikipedia)

Last week Phillies pitcher Tyler Cloyd taunted us by doing things rookie pitchers often do to the Brewers. Or, at least, as we remember it. The contact play failed miserably (starring Yuni B as Scapegoat), and we found that Cardinals fans continue to be the Best in Baseball.

This week we take a break from ripping on the Cardinals and look inward for a few instances which verified our inhibitions with flying colors.

One run lead. Runner on first. Eighth Inning. Mike Stanton at the plate. Because of this, he is not on deck. Someone else wearing a Marlins uniform while simultaneously having less intimidating forearms is. Probably shouldn't see a strike, right?

Maxim: It seems like every homerun at Great American Ball Park is cheap.

When a park is notorious for its ability to surrender homeruns, it's easy to hone in on the cheapo homers and go "Well, it's a hitter's park." It's easy to say that because it's true. Homeruns are easier in that little dinker. Of course, none from the weekend bit Brewers fans quite as hard as Jay Bruce's walk-off "blast" Friday night:

The pitch wasn't that bad. Bruce didn't hit it very hard. Therefore, in Cincinnati, homerun Reds. Martin Maldonado's game-tier earlier in the game was similar. Take a look at Juan Francisco's first homerun as a Brewer on Saturday:

Holy lord. Off the bat, I thought that might be the third baseman's ball in foul territory, if it stayed fair. It's a freaking homerun!

Plus, you know it's a hitter's park when this guy gets into the HR column:

If Scooter Gennett's homer is the closest thing to a no-doubter, yeeew mightbeinahitter'spark!

Bill Schroeder really likes smallball. While I get excited about a quick-strike run (or runs) such as the aforementioned Stanton homerun, Schroeder and many other old-school baseball minds get off on making scoring a run look extremely difficult.

Such a situation arose Wednesday night when scoring a run actually was proving to be difficult. Jacob Turner was looking sharp, but allowed a leadoff infield single to infield single specialist Jean Segura, who then stole second base with Carlos Gomez at the plate with nobody out. It had all the makings of a big inning, so Schroeder instantly suggested Gomez get himself out.

"If nothing else, get 'im over to 3rd base. This is where we've seen Gomez shorten up with two strikes, try to hit the ball up the middle."

"That's just good fundamental baseball by the Brewers. Two strikes, get 'im over, and he's gonna get the high fives in that dugout. Turns out to be a nice at bat by Carlos Gomez."

I could argue that a 3-pitch groundout featuring a chase on 0-2 isn't all that fantastic of an AB. It's still an out. But, he is right to a certain extent. Gomez could've done worse. A pop out. A strikeout.

Because Gomez moved the runner, the grounder by Aramis Ramirez in the following AB scored Segura. Schroeder was then free to share his instinctual love for a run created from as little as possible.

"How about that. The Brewers not able to get a ball out of the infield, but they have a run. An infield hit, stolen base, good fundamentals by Gomez to get 'im over and Ramirez gets him in with the infield back. Good instincts by Segura, just impressive. Continues to get better."

The text doesn't really do it justice. Bill is right in his wheelhouse. The whole monologue is stutter-free and rhythmic, so beautiful one could hardly believe it wasn't choreographed and rehearsed.

Nothing brings out the best in Bill Schroeder like weak groundouts and anticlimaticism. 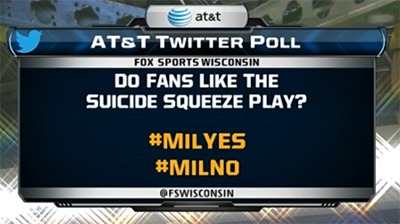 Not much context there. I like eggs, but not for every meal. I like to wear pajamas, but not when I'm bathing. I like a cold ham sandwich, but not when it's already been digested. 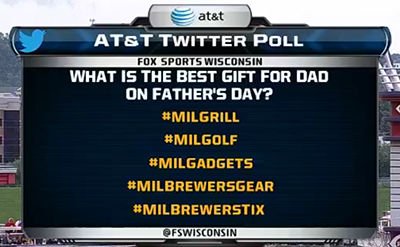 I get that it was father's day, and this is one of FSN's cute little ways of acknowledging it. But it's still stupid. Plus, nice job pushing the current male cultural paradigm. The meatcooking handyman. Because those are the gifts a father should want, right? What's the best mother's day gift, FSN audience? Select #MILFLOWERS, #MILPOTSANDPANS, #MILVACUUMCLEANER, or #MILMAKEUP - results in the 7th inning! 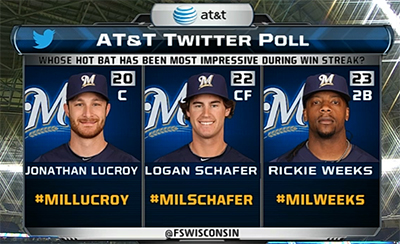 There may be a fine line between pointless and stupid, but my gosh. They were all impressive over a tiny sample. What's the difference?

If you have any more maxims in mind, post in the comments and I'll add them to the master list. So I can selectively choose them when they become relevant - for further virtuous analysis.