A Final Plea to the Milwaukee Brewers Front Office

Share All sharing options for: A Final Plea to the Milwaukee Brewers Front Office

Most of all, we are all sick of persistently roasting a person who has never truly wronged us in any way. And we are even sicker of prefacing every anti-Yuni comment with a variant of "I've got nothing against the guy, BUT..."

Just a few weeks ago I composed this joke of an essay that exhibited a recycled interest in replacing Yuniesky Betancourt with any player or object. Resident photoshopper extraordinaire nullact already captured this sentiment more exquisitely in perhaps the most highly recommended comment in the blog's history nearly two years ago, during Betancourt's first of two stints with the Milwaukee Brewers.

But it hasn't been substantial enough. He remains in a Brewers uniform.

The purpose of this essay is to make a final, comprehensive argument advocating the immediate release of Brewers infielder Yuniesky Betancourt.

My first goal is to wipe the slate clean and focus on the here and now. Become truly objective. Forget everything you have ever felt for Betancourt and think about the current state of the Milwaukee Brewers. As I write this sentence the Brewers sit at 37-55, 19.5 games behind the first-place St. Louis Cardinals. It is a major league team who is flirting with a top 3 overall pick in next year's draft while part of an organization which boasts one of the nearly universally-agreed upon worst farm systems in all of baseball.

Like it or not, the Brewers took an important step this season. They found out quite a bit about their pitching depth by gambling on in-house options in the starting rotation, and are now testing the positional ranks as well due to several injuries to key players. It is an organization in transition. In the coming weeks up until the trade deadline we may see dramatic turnover. The Brewers' plans for the future are being scribbled furiously by the likes of previous unknown quantities such as Alfredo Figaro, Donovan Hand, Caleb Gindl, or newly acquired Juan Francisco. The way the team is constructed will depend on the way these in-house options handle these new major league roles.

Is Juan Francisco capable of an everyday role? Is Johnny Hellweg starter material? Was Michael Fiers' terrific post-call-up success a fluke? How will Logan Schafer handle a bench role? It's very important to find an answer to these questions while the opportunity presents itself - when wins lose their value.

This brings us to Yuniesky Betancourt. Betancourt is currently playing in his 9th major league season. He is currently 31 years old. He has matured past the peak of his career. He is no longer a prospect. We cannot reasonably expect sudden improvement or a behavioral overhaul of any kind. To tweak a popular baseball cliche: He is what he is.

I am first going to focus on Betancourt's defense, for it is likely his versatility in the infield that is his most attractive ability. With 315.1 innings at first base this season, Betancourt now has the capability of playing every infield position. I had previously stated that I would only speak in present terms, but when it comes to defense, the larger the sample, the better. These are career totals (courtesy of Fangraphs):

Yes, Betancourt has experience at all four infield positions. Yes, defensive metrics are not perfect. But there is plenty of anecdotal evidence to back up the statistical claim that Yuniesky Betancourt is a below average defender, mainly due to his range. He does possess a reasonably strong arm, which is likely a part of the reason the numbers show him adequately at third base. Third base requires less range than shortstop, and he can use his only defensive strength - his arm - to his advantage once he manages to get the ball into his glove. However, his limited athleticism hurts when he's up the middle, and his arm becomes nearly obsolete at first base.

In short - he is not a good defender. In order to keep him on a major league roster, he must contribute something positively in another facet of the game.

Offensively, the story concerning Betancourt has always been plate discipline. Let's temporarily ignore the results completely and focus entirely on swing tendencies. Here is PITCHf/x data from the past three seasons, once again courtesy of Fangraphs:

I'm going to explain these percentages as plainly as I possibly can. Most are obvious.

So, why on earth does he see so many strikes? In 2011 he actually saw a higher than average percentage of strikes despite swinging at 9% more balls than the average batter. The answer is that pitchers fear him so little they don't even bother going out of the zone to get him out. They know that more often than not, Betancourt will swing and get himself out no matter where the ball is pitched. There's no reason to go out of the zone and waste pitches when the pitcher knows an out is coming even if he lays one over the heart of the plate.

In 2012 he only swung at 32.4% of pitches outside the strike zone, a career-low which led to an increase in the amount of strikes he saw. Despite this conscious-or-unconscious adjustment, he finished with a miserable slash line of .228/.256/.400, with a wOBA of .245 and a wRC+ of just 73, playing mostly second base for the Royals. Even with an increased number of strikes seen, Betancourt could not provide anywhere near average league production. This season he has regressed back to his career swing tendencies, and his production is plummeting even further.

Because of his complete lack of interest in taking pitches and the resulting scarcity of walks, Betancourt's entire offensive output rests on how often he hits, and on the quality of those hits. Unfortunately, Betancourt has not aged well, and has hit progressively less often as each year has gone by (click to expand): 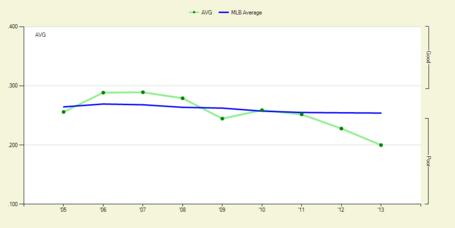 What's kept Betancourt in the league is his perceived "pop." This was deemed particularly valuable when he was a viable middle infield option - finding legitimate power at second base or shortstop is not easily done. However, his slugging percentage has never really exceeded league average, and has taken a sharp dive this season (click to expand): 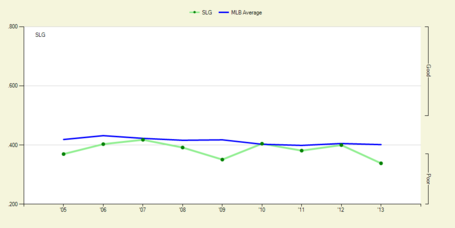 Now, with Betancourt playing for the Brewers at primarily first base and third base, the value of this power decreases. Instead of theoretically making up for lost defensive runs by providing "pop" in the middle infield, this "pop" isn't even a wash with the typical corner infielder, and the accompanying lost defensive runs make him a major negative value. Last year he posted a -1.0 WAR with the Royals, and he has already accumulated -1.3 WAR for the Brewers this season.

Of course, these two statements are only important if wins are important. Right now, given the aforementioned state of the Brewers, they very well may not. Which means that there must be something else Betancourt provides to the team that can't be quantified in terms of wins or value in order to possibly justify keeping him around.

Perhaps he represents an organizational philosophy of stockpiling free-swinging faux power hitters who can't play a lick of defense. Or, more likely, he is being kept because his teammates are dropping like flies and he's a warm body who has experience standing on four different parts of the diamond. Maybe he works harder off the field than any other player in the dugout, and management considers that to be a trait a young player like Jean Segura might acknowledge and acquire due to Betancourt's example. Ultimately, I can't speak to that, and it's up to the decision makers to negotiate amongst themselves the trade-off between the value of his experience and leadership and the incredible negative value of his on-field performance.

However, as fans, we are subject only to the quantifiable evidence and what we see on the field. We see Yuniesky Betancourt and we see a player who will never be valuable to a contending major league team. We see a player whose symbolic significance far outweighs even the heaviness of his negative value.

Basically - I see Yuniesky Betancourt, and I feel the organization has given up. And that's not a good feeling.

I've said all I have to say. I think we all have. This my final plea. Please, Milwaukee Brewers - release Yuniesky Betancourt, and restore our faith.

Oh, and for God's sake, whatever you do - don't sign him again.