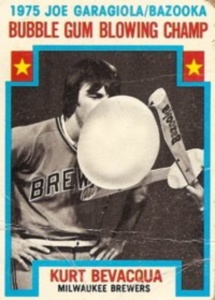 The Brewers finished 22nd in winning percentage in 1976, and the 22nd ranked player in WAR was infielder Kurt Bevacqua.

The first thing that you must know is that Kurt Bevacqua was Major League Baseball's bubble gum blowing champion. There were champions in different years, and this was a 70's thing that people did before more modern distractions like the Walkman and breakdancing arrived, and Kurt won the title for blowing enormous bubbles. I would expect that the perennial champions in a competition like this would be guys like relief pitchers and bullpen catchers, but apparently utility infielders also had the requisite free time to invest becoming proficient in this valuable skill.

Bavecqua was acquired from the Kansas City Royals before the start of the 1975 season with the plan of backing up Don Money at third base, who was suffering from back problems. In May of that year, 10 days after Hank Aaron broke Babe Ruth's career RBI record, the Brewers played a game against Bavecqua's old team. In the 7th inning former teammate George Brett barreled into second base as the lead runner in an inning-ending double play, and Bavecqua threw his knee into the tag. Brett came up swinging, and Bavecqua threw his own punch, and bench-clearing mayhem ensued. Bevacqua claimed that Brett grabbed his leg and tripped him, and provided this perfectly Bevaquesque quote:

"I turned around and hit him. That's the thing to do, right?"

"Dirty" Kurt had been in fights before, including a row with the Oakland A's in '73 where he was pummeled by future Brewer Sal Bando ("it was like being hit by a freight train"). In 1981 he was the centerpiece of a brawl between the Pirates and Tigers in spring training, and in 1984 was in of one of the worst brawls in the history of baseball when was smacked in the head with a beer mug by a fan during a beanball-war-turned-brawl between Dick Williams' Padres and Joe Torre's Braves. That game ended with 5 HBP (surprisingly none by Goose Gossage), 15 ejections, at least 5 fan arrests, and riot cops on the top of both dugouts. Bavecqua wasn't even in the lineup that day.

Always good for a quote, after a game against Tommy Lasorda's Dodgers in '84 when Tom Niedenfuer hit San Diego batter Joe Lafaye in the head, Bavecqua said:

"They should fine the fat little Italian $500, too. He ordered it."

As much as Bavecqua was a magnet for drama, his 1976 campaign with the Brewers was uneventful. He appeared in only 12 games, with one hit in seven plate appearances, a single off the Orioles' Doyle Alexander on May 12. After the season he was sold to the Seattle Mariners.

1976 FotF: Kurt Bavecqua was a backup infielder and bubble blower, with a habit of finding trouble wherever he went. Thankfully he came and went from the Brewers pretty quickly, and possibly the best thing manager Alex Grammas ever did for the Brewers was to hide Kurt at the end of the bench to keep him from getting too excited about the game. Bavecqua served as a good caution for the Brewers that even though it was a blue-collar drinking town, there was a time and place for things and if you weren't careful you could end up in a lot of trouble. Thankfully they learned that lesson, and moving forward the Brewers would start to get recognition for their aptitude, not their attitude. 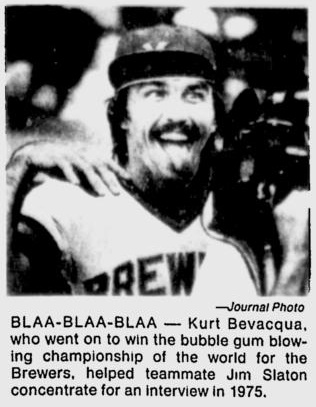 You can also read about 1975's Face of the Franchise Jim Slaton here.