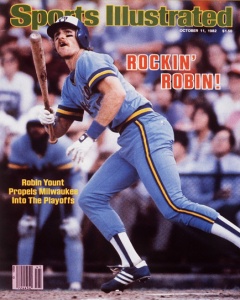 The Brewers finished 1st in winning percentage in 1982, and the top ranked player in WAR was shortstop Robin Yount.

In 1973, the Brewers drafted 23 players. Only one of them ever made it to the majors, but one was enough. Robin Yount was drafted at age 17 out of Taft High School in Woodland Hills, CA, and he spent only 64 games with the A-level Newark Co-Pilots before being chosen to be the starting shortstop for the big club in the spring of 1974. "The Kid" as he was called - for the rest of his 20-year Brewer career - had a lot to learn and a lot of skills to acquire, but it was apparent early on that his energy and athleticism and positive attitude would make him a winner.

Early on Yount took a beating at shortstop. It was a key defensive position on the field, and a lot of pressure for a young guy on a team that had very high expectations. The veteran players around the league took notice, and made sure to make Yount's welcoming as harsh as possible. He took a lot of hard slides and saw a lot of knockdown pitches. But The Kid was tough, and his teammates helped defend him, as did manager Del Crandall:

"Last Sunday [Texas Rangers manager] Billy Martin said at the outset of the game that he was going to have his pitcher knock down Robin Yount four times. So when something like that is said and followed through, you have no choice but to do the best you can to keep from being the patsy in the whole thing."

Yount's success almost didn't happen; in 1978 he felt he was underpaid by the Brewers and threatened to retire to become a professional golfer. Thankfully his demands were met, his proficiency at shortstop grew, and his bat started to mature. With the St. Louis trade in 1981 the Brewer lineup added a veteran presence and the team came together to make the playoffs. Heading into 1982 they were confident, talented, and determined.

At first it looked like the powerful franchises in American League East were going to rule the division. By the end of May the Brewers were 2 games under .500 and 7½ games out of first place behind the Red Sox. In June they started putting wins together, and in July they caught fire. Yount was especially hot, hitting .414 for the month of July with 8 HRs. They dominated series in Boston and New York, and when they were finished sweeping a 5-game series in Chicago they were standing atop the division by a game and a half.

From there on out it was a dogfight. Earl Weaver's Orioles were making a strong push at the same time, led by Hall of Famers Jim Palmer, Eddie Murray, and rookie shortstop Cal Ripken, Jr. The battle waged on through September, with the O's winning five straight games head-to-head with the Brewers. When the dust settled at the end of the season, the two teams were tied, and a one-game playoff was needed to settle the difference. Yount came up big in the final game, leading the Brewers to a 10-2 division-clinching victory with a pair of home runs.

The Brewers won a 5-game series against The California Angels, led by Hall of Famers Reggie Jackson and Rod Carew, and faced off with their franchise nemesis, the St. Louis Cardinals, in the 1982 World Series. They fell short in the 7th game, but you couldn't fault The Kid. Yount hit .414 in the Series, which would turn out to be the last playoff appearance of his career. Yount was voted the league's Most Valuable Player, winning a Gold Glove, a Silver Slugger, and putting together one of the best seasons for a shortstop in history. His season was worth an amazing 10.5 WAR, he led the league with a .957 OPS, and his .331 average was 2nd only to Willie Wilson's .332.

In 1985 Yount had a shoulder injury that forced him to give up playing shortstop in favor of playing center field. Naturally, he was excellent at that also, making many spectacular plays, the most memorable of which was the catch to preserve Juan Nieves' no-hitter, an exquisitely-called performance extracted from an average pitcher by legendary Brewer catcher Bill Schroeder.

In 1990, after the Brewers had parted ways with Paul Molitor, Yount was signed by abusive cheapskate Bud Selig to the contract that would end his career in Milwaukee, temporarily making him the highest-paid player in baseball. After winning his second MVP award in 1989, Selig secretly referred to Yount as a 'whimp' for his lack of leadership. Yount would go on to join the Hall of Fame's class of 1999 with George Brett and Nolan Ryan and become one of the most respected ballplayers of his era, and Selig would move to the office of the Commissioner where he would become one of the most hated executives in the history of the game.

Yount has returned to the organization regularly, filling in as a coach and hosting charity events, and remains young and enthusiastic about baseball and the city that still loves him. Even at the age of 57, he is still known by the nickname that Bob Uecker gave him: "The Kid."

1982 FotF: Robin Yount is the historical face of the Brewer franchise. There are more stories about his famed career than could ever fit in one column. He was an active player for many of the greatest moments in franchise history, and continues to be a presence in Milwaukee sports. He was an MVP at two positions in two different eras of Milwaukee baseball, and he earned the respect of everyone he played against. He played hard with no regrets, and walked away when the time was right. He's still in great shape and looks like you could start him at shortstop tomorrow. The 1982 Brewers were the best team in baseball, and Robin Yount was the best Brewer ever. 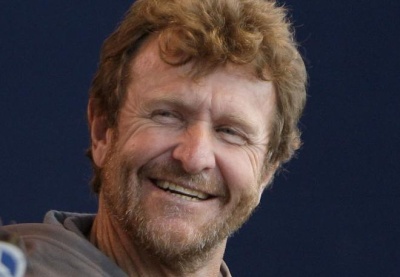