After Ryan Braun released a statement, Doug Melvin followed it with some comments of his own. 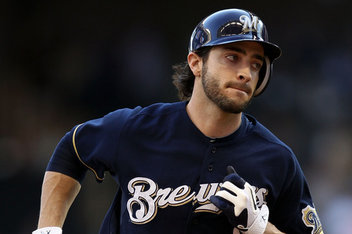 For the full text of Ryan Braun's statement, Brew Crew Ball has it here.

After Ryan Braun's statement was released, Doug Melvin had some comments on the situation.  Adam McCalvy released a blog post with those comments, but here's the quotes for you to read as well.

First of all, here are quotes from Melvin about the statement itself.

"I think it's just got to satisfy Ryan. He's got to feel good about it," Melvin said. "He has to put it out; I think people were waiting for it. He wanted to put some thought into it and wanted to make sure he got all of his facts straight before he did it.

"My feeling is, I know he put a statement out, and that's the right thing to do. But I think when any player goes through what he's done, it's going to be the actions after that will be important, too. ... [The statement] is going to be analyzed, dissected, and it's never going to satisfy everybody. That's why I'm saying beyond a release of what he has to say, the most important thing is an individual's actions when he comes back. He's going to be one of 25 players."

Melvin also remarked on what Braun needs to do before he returns to the Brewers next season:

"I don't know what ‘more' is," Melvin said. "I think his actions when he comes back are going to be the most important thing. When a player comes back from a situation like this, he's going to be one of the guys. It's up to every individual on how he's going to be [accepted back]. Every individual has his own feelings, and I think once you put on the Brewers uniform, there's an acceptance that you're all working in the same clubhouse, on the same team. Guys are all professional enough to understand they're on a team. They'll all move forward and try to win ballgames."

If you're hoping to hear from Braun's teammates about the statement, it may be a while.  Braun waited until the team was in the air to Cincinnati to release the comments.  We'll probably hear from them soon, but it will be later tonight or tomorrow.