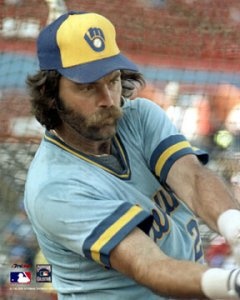 The Brewers finished 4th in winning percentage again in 1979, and the 4th ranked player in WAR was slugging center fielder Gorman Thomas.

James "Stormin'" Gorman Thomas is a Brewer legend. Prowling center field for the Brewers during the late 70's and early 80's, he resembled a strategically shaved bear, and at the plate he was the prototypical 3TO player. He led the AL in home runs in 1979 and 1982, in strikeouts in 1979 and 1980, and walked enough that his career OB% was 99 points higher than his average. He knew he would hit dingers, but what he was really proud of was his fielding:

For all his power, Thomas is proudest of his fielding. At 6'3", 205 pounds, he has a build that seems more suited to playing running back than centerfield—and he performs with a football player's abandon. Four times this season Thomas has knocked himself out by crashing into outfield walls while pursuing fly balls, but he has committed only two errors. Bamberger, who shifts other Brewer regulars in and out of the designated hitter's spot, is not about to waste Thomas' aggressive fielding by making him a DH; he has performed that role in only four games in the last two years. "I feel I have no peer as a centerfielder," Thomas says. "I want...I deserve to win a Gold Glove."

Thomas was the first round draft pick of the Seattle Pilots in 1969, and like most first-round Brewer picks he was given many second chances and a lot of time to develop. He got his first shot with the big club in 1973 at age 22, but after four years of part-time play in the majors accumulating only 22 homers and a .193 average, Thomas was sent back down to the minors in 1977 for a full season of play with the Spokane Indians. He learned a valuable lesson:

"I hit a home run in Hawaii, a real shot," he recalled. "The newspapers said it traveled about 550 feet. Well, I thought that was really great. Then I saw a guy hit a home run right after me. It may have gone 310 feet. And that one counted just as much. I learned something from that. You'd have to be an idiot to try to hit a ball 550 feet every time up. I'll take one of those 375 foot jobs any day. They're a lot easier."

It might have been Thomas' season with the AAA Sacramento Solons that gave him the best incentive to be more disciplined in his hitting approach. in 1974 the team found itself without a park to play in and ended up playing at Hughes Stadium, on the football field at the City College of Sacramento. It wasn't built for baseball, and the wall in left field was only 233 feet away. On a tip from Hank Aaron he worked on keeping his hands tight, and popped 51 home runs that season. His teammate Bill McNulty hit 55 HR for the Solons, but Thomas was 4 years younger and had first-round pedigree, so he got the call.

Thomas' season in Spokane saw him put it all together. He hit .322 with 36 HRs and 105 walks, and after a very brief trade-and-return exchange with the Texas Rangers, the following season he was the Brewers starting center fielder. He was productive right away, and hit 175 HRs over the next 5 seasons, including a league-leading 39 in 1982, helping the Brewers to their only World Series appearance. Thomas really wanted to win the World Series, and as early as '74 writer Bud Lea mentioned it was his career goal. Unfortunately he did not hit well in the postseason, hitting just .102 in 65 plate appearances, with 2 HRs and 23 strikeouts.

But the game on the field was just one part of Gorman's interaction with the Brewers community. Thomas and manager George Bamberger would routinely stop by tailgating parties both before and after games (saving the beer for after), and enjoyed interacting with the fans. It's not something that you could imagine happening too often in today's game, but even for the times back then Thomas was a recreational free spirit, and occasionally it got him in trouble. In the clubhouse he was known for his pranks, inviting teammates to share exploding cigarettes, stuffing fishheads in Tony Muser's locker, and surprising Sal Bando with a wiggling frog in his jock.

After their World Series appearance, 50 games into the 1983 season the Brewers were 2.5 games out of first place, and they made the very unpopular decision to trade Thomas to the Cleveland Indians in a package that returned Rick Manning. Manning was fast and a good fielder, but he didn't have power like Thomas did, and it broke the mystique of Harvey's Wallbangers. When he returned to County Stadium as a member of the Indians that season the fans came out in force to support him. But it wasn't just the fans that missed him, without Thomas the lineup lost some of its ferocity. He returned to the Brewers at the end of 1986 after rehabbing a shoulder injury and being cut by the Mariners, hit 6 HRs in 44 games, and retired.

1979 FotF: Thomas was a free spirit who had difficulty reigning in his lifestyle issues, but he was always loved by the Brewer fans, and he always enjoyed playing for them. Thomas and pitcher Pete Vuckovich opened a local tavern together, and his heart was always in Milwaukee. Thomas wasn't the world's greatest athlete, but he epitomized this team: He ran hard, swung hard, played hard, and partied hard. It wouldn't last forever, but it was becoming something great. The memories live on, as does Stormin' Gorman's involvement with the Milwaukee Brewer community. 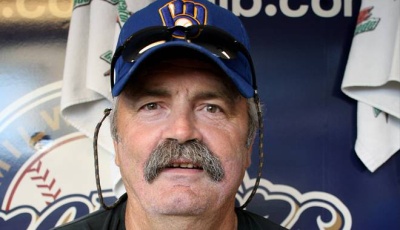 You can also read about 1978's Face of the Franchise Sal Bando here.