Brewers' 1970's Face of the Franchise 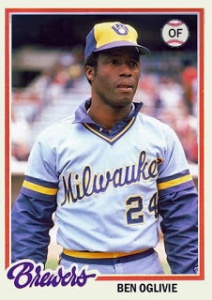 On December 9, 1977, the Brewers pulled off one of the best trades in team history. Brewer general manager Harry Dalton traded the team's top starter Jim Slaton to the Tigers, and in return got one of the extra Tiger outfielders, Ben Oglivie. It started out to be a pretty good trade, but when Slaton returned after one good season to Milwaukee, it ended up being a robbery.

Oglivie was a bright, athletic kid from Panama who moved to the Bronx with his mother when he was 17. He learned English by reading as much as he could and loved to discuss literature with his teachers. Oglivie started his playing time with the Boston Red Sox, drafted out of Theodore Roosevelt High School in 1968, and ended up playing with Cecil Cooper on the class A Jamestown Falcons.

"When I first saw him," says Cecil Cooper, a first baseman on that same Jamestown club and with the Brewers, "I thought he was the new bat boy. He was that small. And his suitcase was that big.

The Tigers never really valued Oglivie that much. They got him from the Red Sox for an aging Dick McAuliffe four years earlier, and had a bunch of other outfielders fighting for playing time, so Jim Campbell and the Tigers probably thought they were getting the good end of the deal. They did get a 17-win season out of Slaton, but when Oglivie bloomed into an all-star outfielder they probably had a lot of regret. As it turned out, Oglivie had a lot of undiscovered talent.

He was a quiet, intelligent player, and fit in poorly with the rascals in Detroit, but flourished in Milwaukee. When he arrived, manager George Bamberger saw his value immediately and made him the starting left fielder. Detroit saw him as a role player, but Oglivie responded well to the increased playing time:

Oglivie's power continued to develop, and in 1980 he led the American League with 41 home runs. He ended up having two of the best games of his career against his former team, hitting three home runs in a game against the Tigers in 1979 and again in 1982. Where the Tigers organization saw him as a utility outfielder, the Brewers worked with him to become a complete player. As Buck Rodgers said:

Although Benji's hitting spoke volumes, you were lucky to be patient enough to hear Oglivie himself speak. Ben was a patient and highly intelligent man, and in contrast to the athletic stereotype, was very literate and philosophical. The guys in Milwaukee were a little more cerebral than in Detroit, but even among them Oglivie stood out.

"There aren't enough hours in the day for Ben Oglivie," said Larry Hisle. Cooper, who's been watching him for years, says, "He's always into something. Karate, poetry, crosswords. The other day I saw him go through The New York Times crossword puzzle in about two minutes."

Although they began together, at the ends of their careers Cooper and Oglivie finished very differently. Cooper was basically benched into retirement, but Oglivie was never the disgruntled man, and he took command of his own fate. After being released by the Brewers in 1986 Oglivie played two seasons in Japan for the Osaka Kintetsu Buffaloes along with former Brewer teammate Dick Davis.

After his playing days were done Oglivie discovered that he still enjoyed the zen of baseball and became a coach, working with the Calgary Cannons, Vero Beach Devil Rays, and Montgomery Biscuits. Since 2011 he has been a coach in the Detroit minor leagues, handing out hitting advice and philosophy to young men playing for the West Michigan Whitecaps. 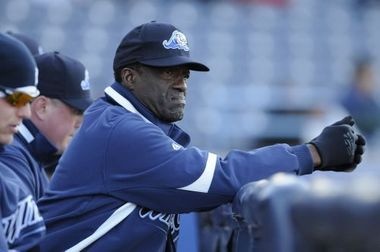 1970's FotF: Ben Oglivie is an impressive person for any era. He was a student of the game and of life, he soaked up knowledge that others shared, and in turn shared what he had to younger players. He waited patiently for his time, made the most of it when he had the opportunity, and departed with grace. When the game was done with him as a player, he rediscovered his love for the game as a coach. More the thinker than the fighter, he was also the fighter when the need arose. He was a gentleman, a wise warrior, and with English as his second language spoke more fluently than some of his teammates. He was quirky in an excellent way, and we're proud to have him as an important part of Brewer history.

You can view other Faces of the Franchise from the 1970's here: