Four teams play games like they were played in 1943, when the league was formed

Share All sharing options for: Local league honors AAGPBL by living their history

Nicole here - back in June I went to a WWII encampment at Trimborn Farm in Greenfield because I heard there was going to be a women's baseball game played. Within minutes of arriving, I knew I wanted in. The women wear spectacular reproductions of the dresses most of us learned about by watching "A League of Their Own" and most of you know what a uniform junkie I am - but there's more to it than that. This seemed like such a natural extension of my baseball fandom that I couldn't imagine NOT doing it once I'd learned more. I love the connection to the history and these women who were front runners for women in sport. I'm honored to be a part of the league.

We have a game this Sunday at Alverno College at 12:00 pm at the softball field at the corner of 43rd and Morgan in Milwaukee. Three alumnae of the original AAGPBL will be in attendance and honored at the game. Admission is free. More information can be found here.

There are soldiers in various states of undress lounging under trees - one is shaving himself in a handheld mirror. Women in cat-eye glasses and saddle shoes carry military issue sacks to a baseball field, change into cleats and pull out small, five-finger gloves and start throwing softballs to each other. You've seen their oufits in a movie, but never this close. Then a man in a German army uniform calls play ball and softball game breaks out. 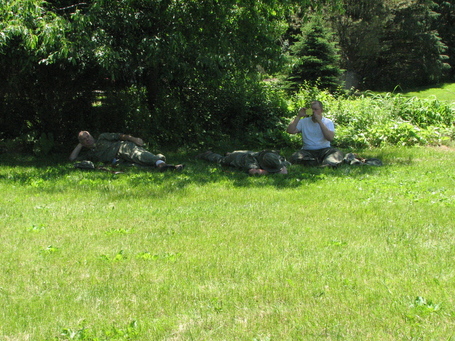 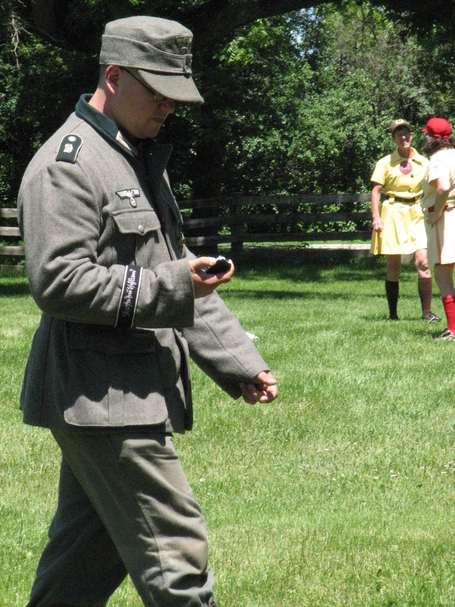 The scene is a little anachronous, but under a sunny June sky in a big, green field, it also directly out of a perfect dream.

While there are always plenty of personas for men to portray at WWII military encampments, it turns out the pickings can be kind of slim for their female counterparts. Rebecca Tulloch had been portraying a US Women’s Airforce Service Pilot, a French Resistance member, and US home front civilian for a number of years at these sorts of encampments when she purchased a Rockford Peaches uniform on the internet in 2009. At the time, she had no idea where that purchase would lead.

"I had been a WWII Living Historian for a few years and was looking to add a new impression. I had always liked the 1992 film, 'A League of Their Own' and thought this would be a nice impression to portray at reenactments," she said.

Of course, once Tulloch had the uniform on, she wanted to play baseball in it. She took to the internet to see if there were any leagues reenacting the All American Girls Professional Baseball League (AAGPBL) and couldn't find any.

That fall, she convinced a friend who also owned a Peaches uniform to attend the Rockford Midway Village WWII reenactment to play catch and bat a ball around. The women turned out to be very popular. They took a lot of pictures and had a great time. And Tulloch realized there was likely a place in the world for a league of women honoring the AAGPBL. So she was going to have to start it herself.

She created a proposal and took it to the AAGPBL Player's Association. Together they created a format for a league that the Association would support.

Out of those meetings was formed the WWII Girls Baseball Living History League. The Living History League is based on the AAGPBL as it existed in 1943 - there are four teams and they play 12" softball, not the 9" baseball that is depicted in the movie that everyone knows so well. The four teams are the Rockford Peaches, the Racine Belles, the Kenosha Comets and the South Bend Blue Sox.

Tulloch took this information and in 2010 recruited players to her Rockford Peaches team and the league was officially born. It has continued to grow from there. 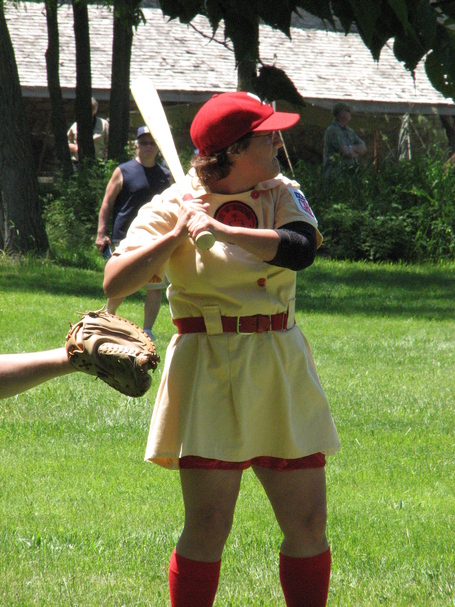 The emphasis on "living history" is an important one in this league. It starts with the authentically reproduced uniforms and use of proper historical equipment, but it extends into the reasons why players get involved in the first place.

Heather Vanderford's grandmother, Joyce Hill Westerman, was an original member of the AAGPBL. Heather and her mother Judy play in homage to Joyce's time in the league and Joyce attends many of their games. Heather wears Joyce's number and sees her participation in the league as a way to thank her grandma for her years of support as well as to show her how proud she is.

While it's about getting to be a part of an integral time in her grandma's life, Heather says it's bigger than that, as well.

"I know that each time I go to an event and play I feel like I'm a part of some of my grandma's fondest memories. I am so lucky and honored to have the opportunity to represent my hero," she said. "It pays respect to the women that played a very important part in girls having sports teams today. The women of the AAGPBL are some of the most amazing women I have ever met, and every second I get to spend with them I get to hear more of the strength and courage these women have. Many of them had no support in the choice they were making to play ball.  I think it is important that we continue to spread and celebrate these women."

Mary Shea sees the league as a perfect combination of two of her passions - history and baseball.

"My parents were WWII generation, so I grew up with great interest and appreciation for that era. I've met a few of the original players from that era, and they're incredible women. They deserve more recognition for their achievements and their strength in pursuing an untraditional career for women, especially back then."

For Tulloch, making the league about keeping the memory of the AAGPBL alive and educating the public about the league and the women who played in it make it about more than just reenactment

"Nobody is playing softball in skirts anymore; women’s collegiate and professional softball is outstanding to play and watch, but their game looks very different in modern uniforms and on artificial surface fields. Our league tries to recreate the nostalgic look of the AAGPBL, thus 'Living History,'" she said.

That commitment to authenticity is carried throughout the game. Watch a player walk up with a war-era makeup case, only to pull her glove and cleats out of it. Get close enough to appreciate the patches and sewing on each of the players uniform dresses. 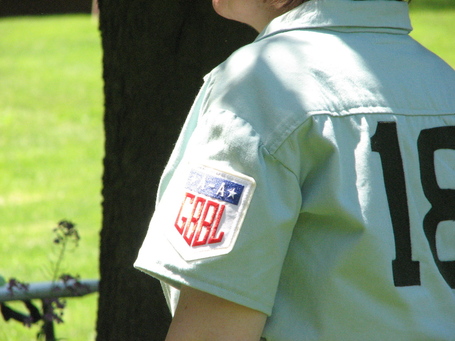 The uniforms are made by K&P Weavers and Tulloch points out that the authenticity of the uniforms and gloves are necessary to transport the spectators back in time. In this league, it's a full sensory attack that allows you to believe you're seeing a game in 1943. Brand name swooshes and synthetic gloves would ruin the effect. Players are asked to search antique shops, the internet or perhaps their grandma's garage for an era-appropriate glove. To play in this league is to make a commitment and know you might fall down a rabbit hole of purchasing era-appropriate accessories. Some allowances are made for updates in fibers and manufacturing, but logos are blacked out and every attempt is made to keep the aesthetic as clean and on-point as possible. 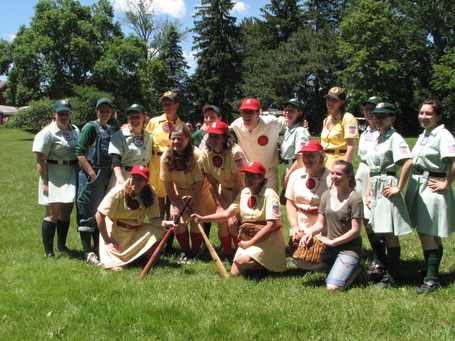 The uniforms are custom-made for each player and can take multiple months to be shipped, so new players in the league are asked to dress as you see during the Wrigley Field tryout scenes in "A League of Their Own" - this usually means three-quarter sleeve shirts and overalls. Even rookies don't have an excuse for not looking the part.

While the players are all women, there is room for men in the Living History League. Paul Zeledon is the coach of the Rockford Peaches and Joe Belmont works as an umpire for their games.

Belmont played baseball for forty years before going to what he calls "the dark side" and becoming an umpire. Now he umpires high school and men's league games. When he learned about the Living History League, he volunteered his skills.

"Fascinated by this part of baseball history and having a passion and respect for the game, I offered my services just to be a part of the game's history," he said.

Zeledon found out about the league early on, as he plays on a men's vintage baseball team and Tulloch spread news of her league through those channels. He saw managing the Peaches as a way to give back to the game. 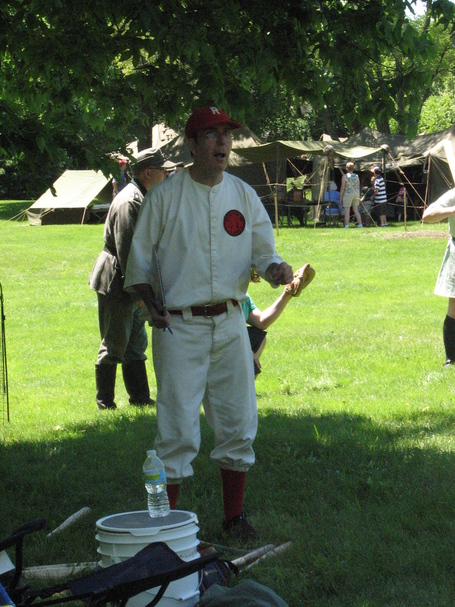 "I volunteer my time because I want to, in some small measure, take what I have learned from the game and pass it along to others," said Zeledon. He also sees it as a way to be a role model for the women in his life, "to show them that women are capable of doing great things."

In September, the women of the Living History League will have the opportunity to play a game at the AAGPBL Reunion being held outside Chicago with some of the Reunion's Associate members. This will be the first time many original members will get to see the League in action.

Tulloch attended the annual reunion in 2010, when the Living History League was in it's infancy. That was the first time many of the original players learned about the league and brought about connections for Tulloch and her league.

"Since then, we have had original players out to some of our games and have even attended a couple of our practices where they have given us pointers and advice on how to improve our game play," she said.

Attending reunions are a unique opportunity for the members of the Living History League and one that is getting rarer and rarer. At one such meeting, Tulloch met with Mary Pratt, a pitcher for the Peaches in 1943. Pratt told Tulloch that the Peaches had their own song in addition to the league song sung in the movie and at reunions. Pratt shared the words and music with Tulloch, who has never seem them in any other place. That sort of moment is the thing the players live for - that connection from the past to what they're doing now and making sure these details don't get lost forever is why the league is so important to them.

On Sunday, August 11 at noon, Alverno College is hosting the Living History League. Two Alverno alumnae played in the league and will be honored at the event. But the game itself is a chance for Alverno to acknowledge how women are instrumental in all different areas of U.S. history. It's also a chance to highlight strong female role models in sports - something that can often be lacking.

The league is always looking for new members. Learn more about the league, see their schedule and sign up to become a member: http://www.ww2girlsbaseball.com/