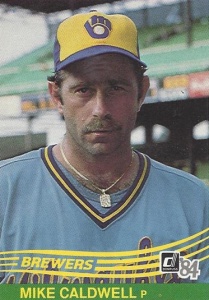 The Brewers finished 25th in winning percentage in 1984, and the 25th ranked player in WAR was pitcher Mike Caldwell.

Mike Caldwell was acquired in a trade with the Cincinnati Reds in 1977 for a pair of minor leaguers. It was an excellent acquisition for general manager Harry Dalton, getting a solid starting pitcher with decent stuff on the good side of 30, for a couple of guys who would never make it to the show. Caldwell had one promising season in 1974 with the Giants that showed people he could pitch, but the rest of his pre-Brewer career was filled with mixed roles, regression, elbow surgery, and misuse by the Padres, Giants, and Reds.

If I ever had to go through that again, I'd quit. They'd have me up in the bullpen for four or five innings and then they'd bring in a righthanded starter to finish up.

In Cincinnati I tried to be quiet, I tried to get a chance to pitch. And just when I started to pitch good, I walked into the clubhouse and they told me I was gone.

The Brewers didn't confuse Caldwell. They needed starters, he was one, and they gave him the ball every five days. He responded immediately to the opportunity and went 22-9 with a 2.36 ERA and 23 complete games in 1978, his best year ever, finishing 2nd in Cy Young voting to the Yankees' Ron Guidry.

Caldwell became one of the steadiest arms in Brewer history, and started game 1 of the 1982 World Series for the Brewers. His 102 victories for the Brewers still ranks 2nd all time behind Jim Slaton. He was exactly what the team needed, and he peaked when the Brewers did in the 80's.

But the drop from 1982 was steep and steady. The veterans the Brewers had acquired began to show their age, or break entirely, due to spending everything they had trying to win the World Series against the Cardinals. There wasn't enough youth available to bolster the ranks, and the Crew went from the penthouse to the cellar in two years with mostly the same roster. 1984 was a terrible season of Brewer baseball, even the players hated it. 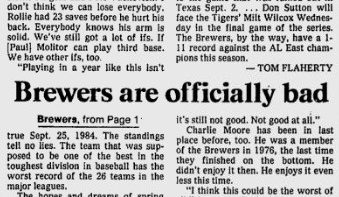 1984 FotF: By 1984 at age 35, his career was in decline, and he was losing his ability to get hitters out. It was the least of the team's worries - Molitor and Vuckovich were injured, and neither Oglivie or Cooper could manage more than 12 HRs. Robin Yount led the team in every offensive category and even he had an off-year. Aside from Yount and Rollie Fingers (also injured again) the team was in complete disarray under manager Rene Lachemann, and only two years removed from the World Series the Brewers managed to win only 67 games. Caldwell was a fighter, but he knew it was over and hung up his cleats after the season in favor of being a college and minor league pitching coach. 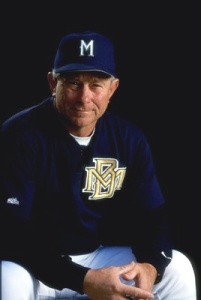