Move Him to First: A Closer Look at Positional Value

Some fans have clamored for the Brewers to move one of their current players to first base, but would that really be a smart decision?

Share All sharing options for: Move Him to First: A Closer Look at Positional Value

EDITOR'S NOTE: This post was written before the Brewers altered the situation a bit by signing Mark Reynolds. I think it's still worth noting, though, as a look at the team's internal alternatives. - KL

I tried to let it go because I knew that each player had greater value at their respective position, but it kept weighing on me and I just needed to crunch some numbers. I suspect many of you understand positional value, but decided to take a closer look at it anyways.

To calculate the WAR of Brewers players at different positions, I used the Simple WAR Calculator at Wahoo's on First. This handy tool was created by Lewie Pollis (@LewsOnFirst), who I must thank for dealing with my questions about the calculator and helping me work through this post. The tool calculates a player's WAR (closest to Fangraphs' WAR) in different situations. It is important to remember that the calculator does its best to replicate the WARs of players and can have minor problems. Any questions you may have can be answered on the calculator's FAQs page.

We'll start with Ryan Braun at first base. For Braun, I decided to plug his 2012 numbers into the calculator because I thought a full, healthy season would be a bit easier to demonstrate Braun's positional value rather than Braun's injury and suspension shortened 2013 season.

In 2012, Braun finished 2nd in MVP voting to Buster Posey and finished with a WAR of 7.6. Braun's WAR in 2012 was fourth highest in all of baseball and second highest among outfielders trailing only Mike Trout's ridiculous WAR of 10.

Now, let's say Ryan Braun's offensive numbers stayed the exact same and the only switch made was his position. Instead of being a slightly above-average left fielder defensively, Braun becomes an average first baseman. (I didn't want to make any assumptions about Braun's ability to handle playing defense at first base, so I thought that average would be a fair way to gauge his defense.)

By simply changing Braun's position from left field to first base, Braun's WAR drops from 7.6 to 6.1. Instead of recording the fourth highest WAR in all of baseball, Braun would drop to 12th, but would have been first among all first basemen with Prince Fielder coming in second with a WAR of 4.8.

For Aramis Ramirez, I decided to again use 2012, so I could have the statistics of a full season to more easily demonstrate Ramirez's positional value at third base compared to first base.

Ramirez had a pretty great 2012 season and recorded a WAR of 5.7, which was good for fifth in all of baseball trailing only David Wright, Chase Headley, Miguel Cabrera, and Adrian Beltre.

As was the case with Braun moving to first base, the difference in Ramirez's WAR created by simply changing positions has a profound effect on his value to the team.

Before we get into the numbers, I will preface this by saying it was a struggle to attempt to use the calculator on Lucroy's WAR. For the other two players, I was able to plug in the numbers and come with the correct WAR value, but I struggled with Lucroy and a few other catchers I tried in the calculator. (I tend to think it is because Lucroy's baserunning was so horrendous last season that it was difficult to correctly calculate his WAR.)

Since Lucroy struggled with injuries in 2012, I used his 2013 seasons to use the statistics from a full season. Lucroy did not hit as well as he did in his shortened 2012 season, but he was still able to record a WAR of 3.6, which put him sixth among the league's catchers.

When using the calculator, I found Lucroy's WAR to be 4.2 as I made him an above average fielder (3) and a horrific baserunner (5). Though this wasn't his actual WAR last season, it can still be illustrative as his WAR drops to 1.3 when simply turning him into an average fielding first baseman.

Once again, a position change to first base made Lucroy significantly less valuable to the Brewers.

2012 was the first season Weeks struggled for the Brewers and he was only able to record a WAR of 1.0, which wasone of the worst among all second basemen. When moving Weeks to first base, his WAR drops to -0.5. Weeks' difference in WAR when moving to first base is actually the smallest of any of the four possible players to move to first base. 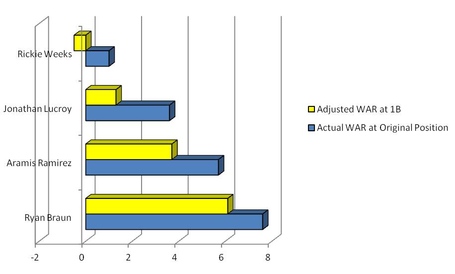 A quick look at these numbers shows that moving any of these players from their current position would significantly decrease their value as a baseball player. A player's value on the baseball field is based on the position they play because there are different offensive expectations at different defensive positions and a move to first base almost immediately takes value away from a baseball player. The offense produced by each of these Brewers at their respective situations is considerably more valuable than it would be at first base.

Now, it may seem that this post was written to show that it would be a mistake to move one of these players to first base, but that was not the point of this post. Instead this post was written to show that roster creation is simply a matter of managing assets. Every player has value and that value can change at various positions on the field. It is up to the Brewers front office to decide where each player should play and how to maximize the value of each player on the roster.