The Brewers first base platoon: Never mention this again

Yesterday I looked back fondly at the Brewers second base platoon. Today I...look back at the first base platoon.

Share All sharing options for: The Brewers first base platoon: Never mention this again

Last year the Brewers suffered every team's nightmare. They lost their Plan A, Plan B, and Plan C at first base. This resulted in a turnstile at the position with Alex Gonzalez, Yuniesky Betancourt, Sean Halton, Juan Francisco, Blake Lallie, Jonathan Lucroy, and Martin Maldonado all getting playing time. It was horrible. This year they opted to go with two players they knew had experience at the position: Lyle Overbay and Mark Reynolds. I'm not sure it worked out exactly as they (or we) had hoped.

Appreciating the Brewers second base platoon 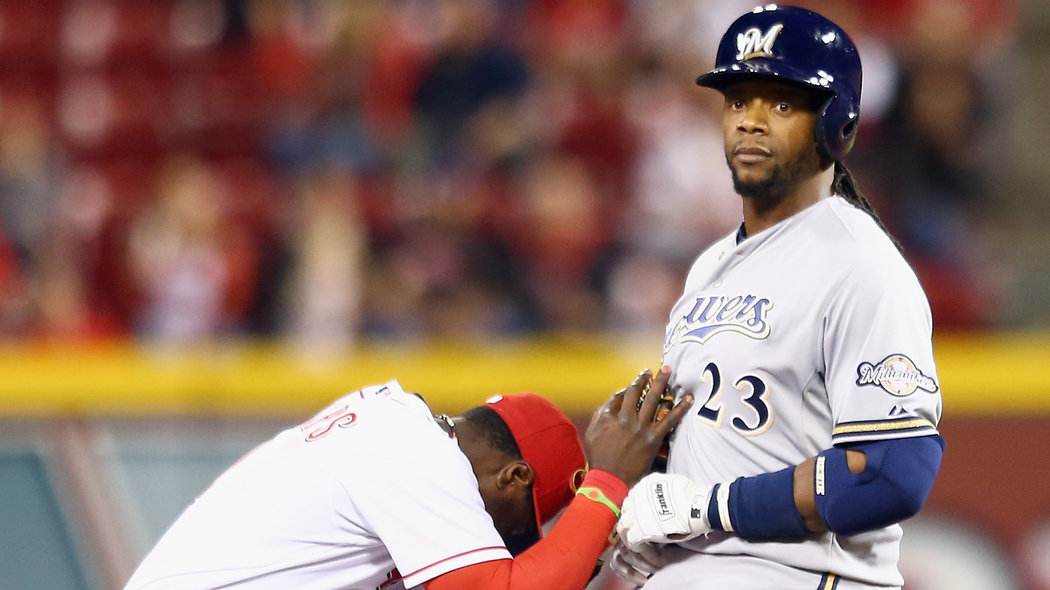 The season is over and now is a time for reflection. At least as far as the second base platoon is concerned, I will always look back fondly.

The dynamic duo combined efforts ranked 20th in MLB with a 1.1 fWAR. That's already pretty poor production, but when you realize the majority, if not all, of that value came from defense it looks even worse. The Brewers defense at first base actually ranked 6th. Their offense at the position ranked 26th with an 85 wRC+. The average production at first base in 2014 was 109 wRC+. So the Brewers received offensive production 24% worse than the average.

I'm less interested in doing the breakdown like I did with the second base platoon, but I suppose we should see just how bad things were. So first we'll look at their season numbers:

That's pretty ugly, but it's also really interesting. The two players, by obviously very different means, produced very similar offense. Their wRC+ are essentially the same and so is their wOBA (.302 for Reynolds, .300 for Overbay). That's why, to me at least, it's very interesting to see the drastic difference in their fWAR. Reynolds was worth 1.8 fWAR more than Overbay. Since their offense was so similar, the difference in fWAR is almost entirely due to their defense. Defensive metrics are less dependable than offensive metrics and defense at 1B matters less than most every other position. So for the 1B value to be basically entirely derived from defense, in my mind, makes their overall production seem that much worse.

Now take a look at how they fared against LHP:

So as you can see, the Brewers didn't have a first baseman (outside the few times they used Jonathan Lucroy) that could hit a left-handed pitcher. It's pretty incredible really. You might also notice that Mark Reynolds offensive value comes almost entirely from his SLG. In other words, his value was entirely dependent on hitting home runs, which he did do 22 times. Overbay actually had a reasonable OBP vs RHP. Reynolds was the more explosive offensive talent, but Overbay with his higher (yet still abysmal) AVG and solid OBP was perhaps more consistent. Of course neither was good in any real sense.

Next year the Brewers will not be looking to either of these players as their solution to first base. If you had any doubt about Lyle Overbay, he answered it in this recent radio interview where he says he's 99.9% certain he is retiring. I could see the Brewers returning Mark Reynolds on the cheap, but only as a bench option. He could provide insurance for Aramis Ramirez (who I think will return) as they don't have a good replacement 3B option. One could hope for an offensive bounce back if one liked to dream. But at the very least we know he can play first and third well enough. While I wouldn't mind Reynolds the bench player, I am very much looking forward to the day when we know the Brewers will have a real first baseman. Hopefully that's next year.