Brewers first basemen: The future is up in the air at 1B

The Brewers have struggled to earn any production from first base recently. What is the future outlook for the position?

Share All sharing options for: Brewers first basemen: The future is up in the air at 1B

The Brewers have suffered through two years of terrible, horrible, no-good, very bad play at first base the past two years. With the offseason upon us, the team now has a chance to evaluate their options and see if they can do something to improve their outlook at first base in the hopefully very-near future.

What can be guaranteed is that the Brewers will feature something new at first base in 2015. Lyle Overbay is going to retire and Mark Reynolds, if anything, would only get another minor league deal to potentially be a backup corner infielder. Where the new face comes from will be interesting, though.

On the free agent market, there is one very clear option in play: The Brewers have been rumored to have significant interest in bringing in Adam LaRoche, who is likely to leave the Nationals this offseason as a free agent. LaRoche will be coming off a two-year, $24 million deal during which he hit .248/.347/.429 with 46 total homers. Though he will be 35 next season, LaRoche offers a clear upgrade at the position and the Brewers seem likely to make him a top priority.

What's less clear is how much it might take to land LaRoche. A similar deal to the two years, $24 million with a mutual option for a third years seems most likely. Though payroll in Milwaukee has risen, that's still a decent chunk to invest for the team, especially in an aging non-star. Still, if the Brewers have the money to spend, signing LaRoche will likely give them a more major upgrade dollar for dollar than they could get at any other position.

Outside of LaRoche, the pickings are slim on the free agent market at first base. Mike Morse is the best of the rest, hitting for a .279/.336/.475 line in 2014 with the Giants while on just a one year, $6 million deal. However, he's more of a natural outfielder and would probably be a defensive downgrade from LaRoche. 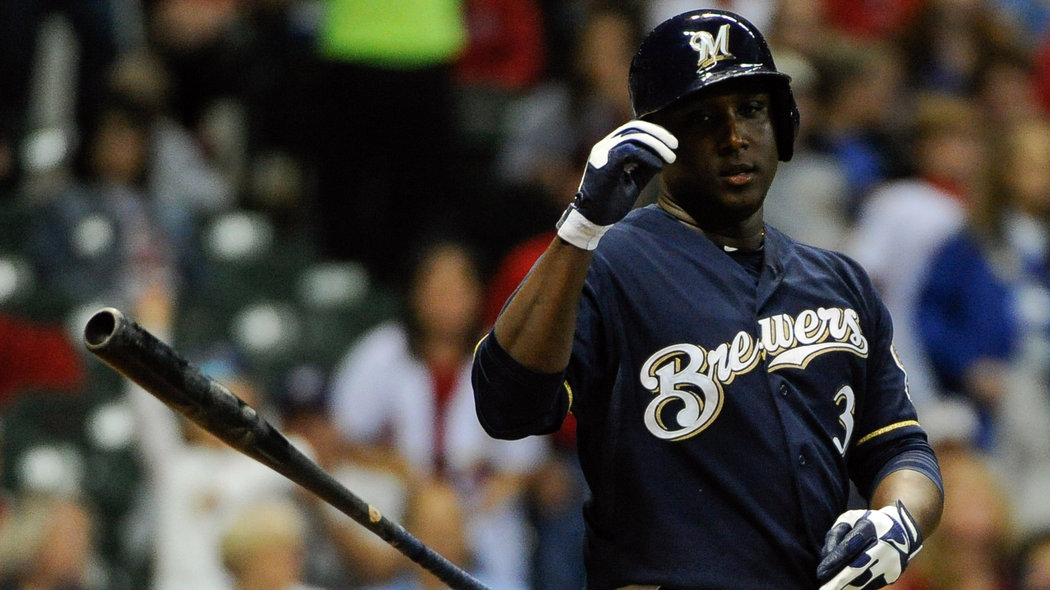 The Brewers recent history at first base is...not pretty to look back on.

After Morse, there is Kendrys Morales -- who the Brewers already didn't seem to want too badly in 2014, -- Corey Hart, Michael Cuddyer and basically nothing else. If not LaRoche and if not Morse, any relief is unlikely to come via free agency.

Internally, the Brewers have few solid options. There has been talk about moving Ryan Braun back to the infield, though it's way too early to expect that to be close to happening. If we get into January and February and the Brewers haven't signed somebody else they may take this option more seriously. Braun has the bat to play at first base (or at least he does if his thumb doesn't continue to hamper him as much as it has). However, throwing him in the fire with little time to learn the position is suboptimal at best. If the Brewers see Braun as a future first baseman, they would be better served by easing him into the spot over the next couple years.

Other than Braun, do the Brewers risk giving Matt Clark the chance to grab first base in spring training? I'll be the first to say that I'm a big fan of Matt Clark, but it's much easier to sit here and say why not give him the chance than to actually have the balls to play a wholly unproven player at first base on what should be a competitive team. With the Brewers looking to quell any more losing streaks, a rookie player likely doesn't exactly fit the mold of what Milwaukee is looking for either.

Still, Clark has nothing left to prove in the minors. After signing a minor league deal mid-season, he played 53 games with the Nashville Sounds and hit .313/.371/.605 with 16 homers. That's not unusual for the 27-year-old, either: In six minor league seasons, he has an 865 OPS and hit a homer once every 5.2 games. If the Brewers do give Clark a real chance to earn the job in spring training, they'll almost certainly bring in another Mark Reynolds-type player (perhaps even Reynolds himself!) to at least provide a veteran option if Clark proves he can't handle the job. And if Clark does somehow earn primary first base duties, we can't expect him to hit like he did in the minors. Rather, he would probably be another Khris Davis in the lineup.

With all of this in mind, what the Brewers will do next year at first base remains in flux. It's readily apparent why Milwaukee is likely to court LaRoche heavily -- he's the least risky option of anything above by far. A trade is also possible. The team couldn't get Ike Davis last year, but a Justin Smoak/Brandon Belt or better player might be available. That would take parting with other players, though, which is not going to be the Brewers favorite option.

The Brewers also have no first baseman of the future. Hunter Morris has power, but not nearly enough to overcome deficiencies in basically every other aspect of the game. Nick Ramirez hasn't shown much, either. Jason Rogers is being looked at for third base and is nowhere close to a top prospect, no matter how much we may like him and how much he's improved recently.

As such, any long-term first baseman to come from the Brewers' farm system is either in the lower levels, has yet to be drafted, needs to switch positions, or some combination of the three. Jake Gatewood, a 2014 draft pick with prodigious power, will likely need a move from shortstop, but he's years away if he even makes it and first base will be a last option. Clint Coulter won't be a catcher, but is being looked at as an outfielder first, it seems.

With no long-term help on the way anytime soon, first base still looks bleak for the Brewers. That could change if, say, Ryan Braun does move there and starts hitting again, but odds are against a move. Instead, Milwaukee seems destined to find stopgaps elsewhere until they can finally develop someone to take up Prince's crown.