The Brewers need a first baseman, and while trading for one is a possibility, today we're focusing just on free agents.

First base is sure to be a focus for the Brewers this winter. There are three main options, in free agency at least: Michael Cuddyer, Michael Morse, and Adam LaRoche. Today we're going to look at how these three players compare to each other. For the sake of argument, I'll be using MLB Trade Rumors contract/salary projections for part of it.

He has experience at multiple positions, but primarily at right field and first base. Obviously the Brewers would use him almost exclusively at first, but it would be beneficial to depth if they could trot him out in right field should Ryan Braun need a day off or get hurt. He's never been a terribly good defender, arguably he's been a bad defender in right, but he's been about average at first. Perhaps that could be helped by moving to first base full time.

Cuddyer has actually been a pretty reliable offensive force into the later seasons of his career. Since 2009 he's only failed to record a wRC+ above 100 in one season (2012). That's very likely related to an uncharacteristically low BABIP. He's never been a huge raw power guy but, based on previous years, 30 doubles and 15-20 homes runs doesn't seem an unreasonable expectation (assuming a full season of plate appearances).

The main downside with Cuddyer is his health. He took multiple trips to the disabled list in 2014 due to hamstring strains, one of which sidelined him for approximately 2 months. He played 130 in 2013, but only 101 in 2012. Age is not on his side here so it's definitely a concern.

Morse is, by several years, the youngest of the 3 first base free agents. Similar to Cuddyer, he is capable of playing an outfield position. I say capable because I think there is a big difference between being able to play a position poorly and simply not being able to play a position at all. Make no mistake: Micheal Morse can play left field. He just can't play it well and the ability to play left field is less enticing than right field because I'm more worried about Ryan Braun missing a lot time than Khris Davis. That's really not really why you'd sign any of these guys though, because the Brewers primary need is first base. And like Cuddyer, Morse is a much more reasonable defender at that position.

Morse has a pretty reasonable offensive track record as well. Since 2009 he's missed a 100 wRC+ twice. His peak season was in 2011 when he hit 33 home runs and a 148 wRC+. The next three seasons saw varying degrees of success (113, 80, 133 in chronological order) and varying amount of playing time. Given a full season of at-bats, one could perhaps reasonably hope for 30 doubles and 15-20 home runs.

Morse suffered an oblique injury late in the season that sidelined him until recently when he pinch hit and DH'd for the Giants in the World Series. That's not a lingering concern going into 2015, but he doesn't have a good track record. He's played 146 games once (2011) and over 100 games only three times (including 131 in 2014).

LaRoche plays just the one position, but it's the only one that really matters here. He's very easily the most experienced first baseman of the group and probably the best defender there. Unlike the other two players he does not come with any major injury/playing time concerns. The only season he missed any significant time was in 2011 and since then he's played 154 games, 152 games, and 140 games.

LaRoche has had pretty reasonable success at the plate in his career. He's missed a 100 wRC+ once since 2009. Over the last three seasons he's reached 127, 102, and 127 in consecutive years. He has a career average of about 25 home runs a season and has only failed to reach that mark once since 2008 (twice if you count his injury shortened 2011 season). He did this while playing at home in pitchers parks with the Braves, Pirates, and Nationals. He's the only left-handed hitter of the group and that could help his home run totals while calling Miller Park home. He's also the only player here to record double digit walk rates in recent years. In fact, he's seen a rise in those walk rates from 2010 to 2014 (10.4%, 12.2%, 14.4%).

I did notice a startling drop in his doubles in recent years. Almost every season from 2006 to 2012 he hit 35 or more doubles. He hit 32 in 2008 and 4 in the injury shortened 2011. In 2013 and 2014 he only hit 19 doubles. His BABIP for those two years were both career lows (oddly enough it was .277 for both years). Unsurprisingly his batting average dipped these two years but his OBP did remain solid thanks to his high walk rate. I have no idea what resulted in the drop in doubles. Perhaps it was age setting in. If that were the case though, I would expect to see a corresponding drop-off in home run numbers. While he did only hit 20 in 2013, he bounced right back hitting 26 in 2014.

Here's how the three compare statistically in 2014:

And here's how the three compare over the last 3 seasons:

Right away I'm eliminating Michael Morse. He's missed almost as much time as Michael Cuddyer, but while Cuddyer missed most of his time due to an injury laden 2014, Morse has missed time over consecutive years. He's also been the least effective offensively over the last three years.

Choosing between Cuddyer and LaRoche seems a more interesting conversation. Cuddyer appears to have a higher overall offensive ceiling. He's had solid OBP, but that's due in part to high batting averages. LaRoche hits more home runs and draws a lot more walks and so his OBP is more reliable. If it was me I think I'd bet on LaRoche's consistency instead of Cuddyer's potential. If I thought Cuddyer could play even just 130 games for sure, I might be inclined to go with him. 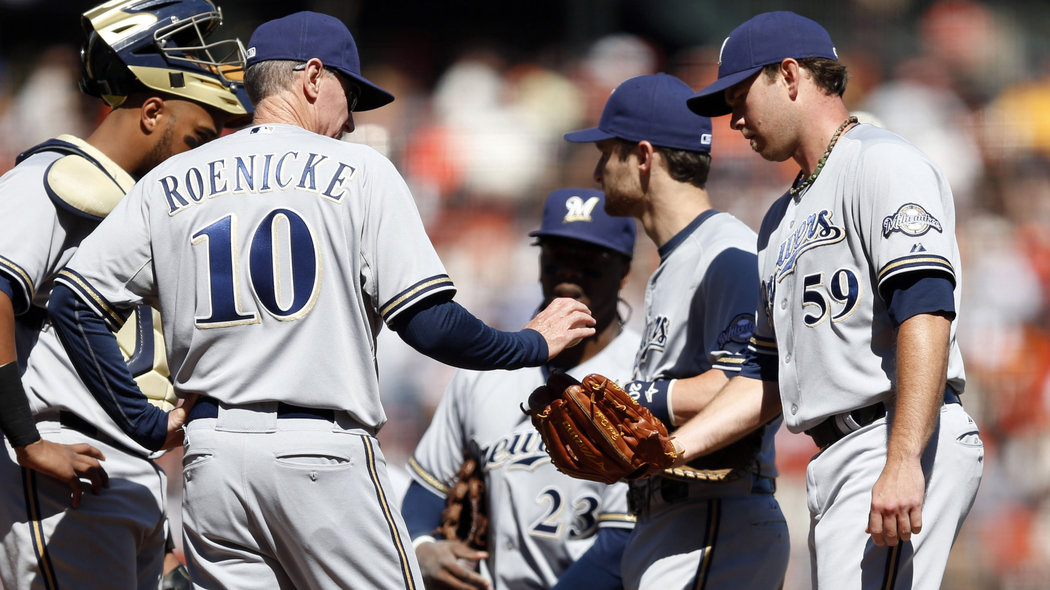 The Kansas City Royals have shown what a good bullpen can do this year. The Brewers relief corps isn't looking too great for the 2015 season, though.

It gets tougher when considering their projected contracts. The years are the same, but LaRoche is projected to make $4 million more each season. I think he's definitely worth more than Cuddyer but with the Brewers being so close to their financial limits, that $4M could be meaningful.

What do you think? For the sake of argument, let's ignore trading and in-house options. If you had to sign one of these guys, for the projected contract, which one would you take?