We're still a few weeks away from free agency, but now is as good a time as any to go over the Brewers impending free agents.

Share All sharing options for: The Brewers impending free agents

Players that are eligible, become free agents the moment the World Series ends which will be between October 25-29. Then there is a quiet period of 5 days where departing free agents may only negotiate with their previous team. After those 5 days are up they can then negotiate contract terms with any of the 30 clubs.

Looking back at the first base platoon 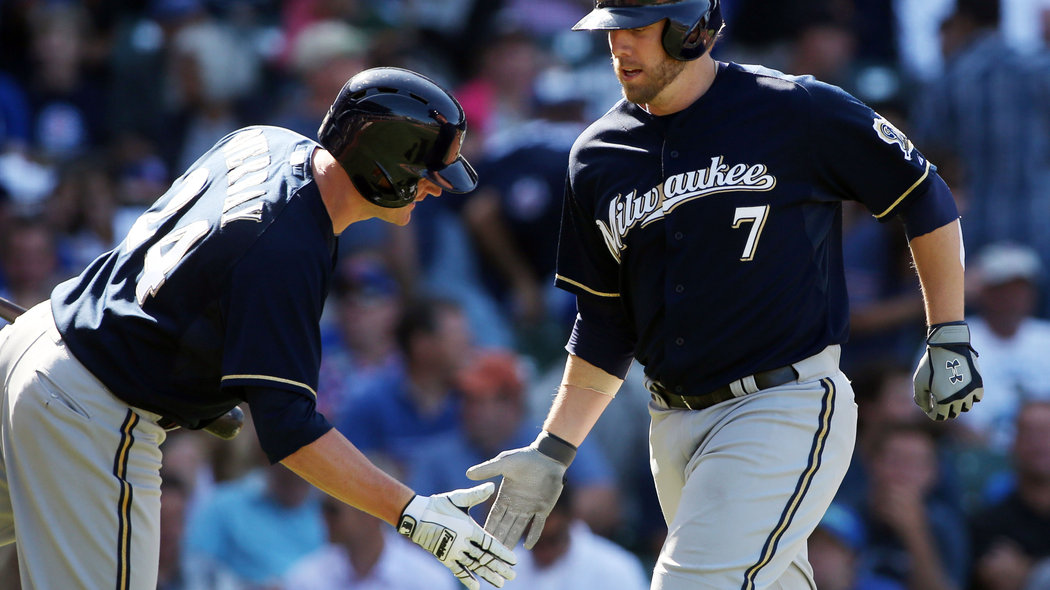 Recently I looked back fondly at the Brewers second base platoon. Here I...look back at the first base platoon.

Lyle Overbay: There isn't really a need to discuss this one. In a recent radio interview Lyle Overbay claimed he was 99.9% certain he would retire. Even if he wasn't going to retire, he almost certainly wouldn't be brought back after a poor offensive and defensive season as a bench player.

Mark Reynolds: This one is tricky. Reynolds had his worst offensive season in 2014, though he still hit over 20 home runs in a somewhat reduced role. He surprised everyone with his stellar defense at both corner infield positions so at the very least he could be a defensively competent corner infield bench player. If the Brewers do bring back Aramis Ramirez, it's probably very important to have someone they know can play the position, in case he gets hurt.

The Brewers signed Reynolds to a base contract of $2 million with another $500,000 available through incentives in 2014. I see no reason to think he'll be in a better bargaining position this year. I think signing him to a similar contract would be acceptable. What the Brewers do with Aramis Ramirez will tell us a lot. It's also possible the Brewers have enough confidence in the trio of Jason Rogers, Hector Gomez, and Elian Herrera that they don't feel the need to hedge their bets at third base.

Tom Gorzelanny: The Brewers signed Gorzelanny to a 2 year deal in 2013 worth $5.7 million. He performed reasonably well, In 2013 he was vital as a swing-man in a rotation severely lacking a good 5th starter. Then, he had offseason shoulder surgery and missed over 2 months of the 2014 season. He was quite excellent in relief when he returned, however he was unable to consistently pitch in back-to-back games. That's a problem. It might be a non-issue going forward, but if it lingers then it's probably not worth rostering him.

Zach Duke: I thought Duke was going to be awful for the Brewers and expected him to be gone after a month or so. Instead he was probably the best reliever in the Brewers bullpen. This was thanks to a new sidearm delivery which suggests this year wasn't a fluke but instead a sign of real improvement. I know Ron Roenicke likes having 2 left-handed pitchers in the bullpen, so interest in returning him will be there.

Duke was signed to a 1 year $850,000 contract. He'll get more this time around. Last year a lot of solid middle relievers signed 3 year deals. If that's what Duke is looking for I think the Brewers might let him walk away. I'm not sure if that's a good or bad idea. Bullpens are volatile and relievers are fungible assets. That doesn't mean it's easy to find effective relievers though. If it was me I'd be willing to sign him for something like 3 years and $9 million, though I'd try to get him for 2 years first.

Francisco Rodriguez: K-Rod was reasonably successful in his 4th season with the Brewers. He earned 44 saves in 69 appearances with a 3.04 ERA. However, he also had the highest HR/9 of his career (1.85) which is very scary. The Brewers signed him to a 1 year $3.25 million contract. I think some team is going to ignore his HR/9 and pay him based on those saves. With $9 million allotted for Jonathan Broxton, I'm quite confident that team will not be the Brewers.

Tomorrow we'll look at the Brewers players with options that could potentially become free agents.