The Brewers have 4 arbitration eligible players and 2 tough decisions to make.

Previously we looked at the Brewers impending free agents as well as their potential free agents. Today we're wrapping up this series on free agents by looking the Brewers arbitration eligible players.

If you're unfamiliar with the arbitration process don't worry. It's as convoluted as everything else involving baseball front office decisions. The last day to offer contracts to unsigned players is December 2nd. This is the deadline for teams to offer arbitration to eligible players, or non-tender them. If a player is non-tendered they become a free agent.

Assuming arbitration is offered, the two sides have until January 13th to negotiate terms. If they don't agree to a contract of some type by then, they start the arbitration process. On January 16th the two sides exchange salary figures. Those are the figures they'll take into an arbitration hearing if it gets to that point. Those hearings will be held from February 1-21.

In those hearings, an impartial arbiter will decide which salary figure to side with. It can get kind of ugly as the team is essentially arguing the player isn't as good as he thinks and doesn't deserve as much money as he's asking for. The two sides can agree on a figure up to the last minute before their hearing is scheduled. Most of the time salary figures are agree upon before actually going to a hearing. The Brewers have a very good track record on this.

Typically, when a minor league player gets called up, his "clock" is started. After 3 full years of service time making league minimum or close to it (know as the pre-arb years) that player then becomes arbitration eligible for the next 3 years. After that 3rd year the player is eligible for free agency.

Two final things to note. It is possible to trade a player a team has offer arbitration to. That player will then negotiate with the team he was traded to on salary figures. Also, it's possible for a team to cut a player after agreeing to terms. This happened with the Brewers and Juan Francisco at the end of spring training earlier this year. The Brewers were required to pay a portion of the arbitration salary they had agreed to. Things like that are rare though.

Martin Maldonado - Arb 1: I think Martin Maldonado might be the best back-up catcher in baseball. His defense is every bit as good as Lucroy's and arguably better. They're both exquisite pitch-framers but Maldonado has the superior arm. His offense is what keeps him from being a regular. Still, he has had a couple of reasonable years (97 wRC+). Near league average offensive potential coupled with his defense makes it a no-brainer for the Brewers. They will offer him arbitration.

As a back-up catcher in his first arb year, Maldonado can't expect to get much money. Fair or not he'll probably get compared to Jonathan Lucroy who didn't make over a million dollars until his 5th year with the Brewers. Maldonado certainly won't make more than $1M and I would be surprised if he got more than $750,000. I'm just guessing here, but I'll say he gets about $700,000 which seems pretty reasonable for both sides.

Periodically I'll see suggestions that the Brewers should trade Maldonado. I vehemently disagree. As I mentioned already, I think he's among the best back-ups in baseball. His salary will be very modest. The Brewers don't have a catcher in the minors to take over for him. If they signed a catcher out of free agency they're likely to get a lesser player for more money. I'm not sure they can get the kind of return in a trade to make it worthwhile. 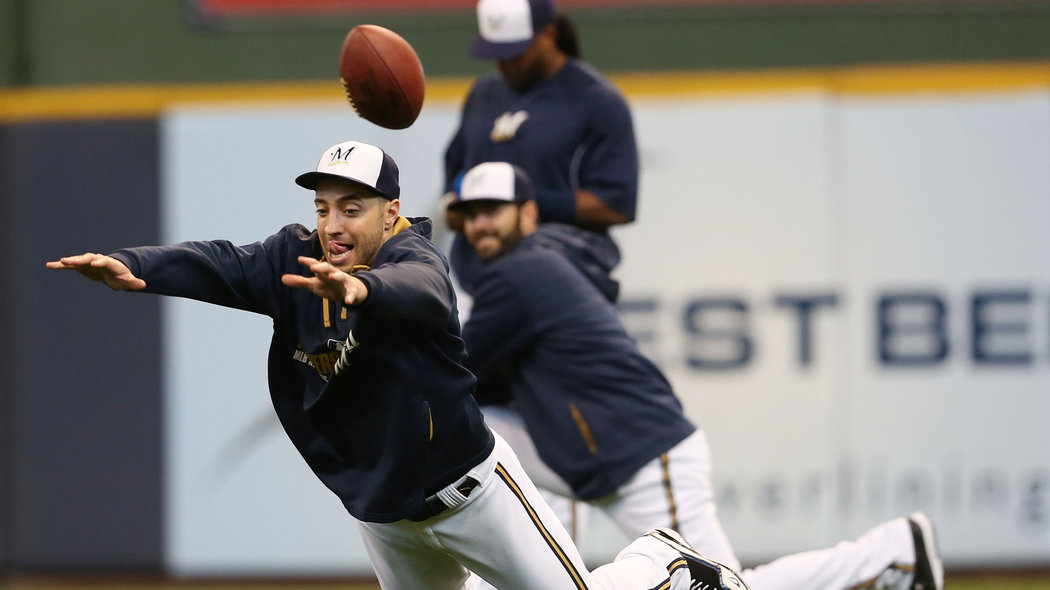 Gerardo Parra - Arb 4: The Brewers acquired Parra at the end of August to be their 4th outfielder. While he technically had his worst season as a major leaguer, he was pretty much exactly what the Brewers wanted and needed. He's a fringe regular because of his modest offense, but his defense is solidly above average. As the 4th outfielder the Brewers were able to maximize his offense by playing match-ups. He's undeniably a major upgrade from Logan Schafer. With Braun's thumb still a question mark, and the drop from Parra to Schafer being so steep, I believe the Brewers will want to bring Gerardo Parra back next year.

This will be Parra's final year of arbitration and the first time he goes into it primarily as a back-up/role player instead of a regular starter. Last year he and the Diamondbacks agreed on a $4.8 million salary. As I mentioned, he had his worst season in 2014, but players never make less money in arbitration so he's definitely due a raise. He could get as much as $7 million in arbitration. I don't think he'll end up with quite that much though. I could see he and the Brewers agreeing to a 1 year deal worth around $6-6.5 million.

That being said, I wonder if it's possible the two sides agree to a 2 year deal for around $10 million. It seems unlikely that Parra would be able to get a starting job anywhere right now and so it might be desirable to him to secure the guaranteed years and money. It would benefit the Brewers to have that quality of a back-up player for a couple more years. It might also make trading a player like Carlos Gomez or even Ryan Braun easier if the worst happens and they fall out of contention in 2015 or 2016.

Brandon Kintzler - Arb 1: Kintzler was absolutely excellent in 2013. In fact, he was arguably the Brewers best reliever. In 2014 he came into the season with shoulder problems and was much less effective. Apparently he also had an issue with his knee as it was reported he had knee surgery around the same time Braun had his thumb surgery.

Despite all that he had a much better second half and ended his season with a 3.24 ERA, 3.71 SIERA, 3.87 xFIP, and a 4.68 FIP. Jim Henderson had shoulder surgery and Tyler Thornburg had PRP injections in his elbow late in the season. Neither should be considered a safe bet to avoid the DL to start the season. For all those reasons, I'm pretty confident the Brewers will offer Kintzler arbitration.

As a reliever entering his first arbitration year Kintzler also can't expect to make much money. He has low strike out numbers working against him, however his back-to-back season ERAs of 2.69 and 3.24 will work in his favor. I could see him making anywhere from $700,000-$900,000. Either figure seems reasonable enough considering his ceiling is a bounce back year to his 2013 numbers.

Marco Estrada - Arb 3: Estrada entered the year as the Brewers fifth starter. I thought that was great. Unfortunately it was not. He threw 107 innings across 18 starts with a 4.96 ERA, 5.73 FIP, 4.25 xFIP, 4.04 SIERA and an embarrassing 2.27 HR/9. Still his other peripherals remained quite good suggesting some of his poor production, especially the home runs, would normalize with more time.

Mid-season the Brewers transitioned him to relief and he was excellent. He threw 43.2 innings in 21 appearances with a 2.89 ERA, 2.81 FIP, 4.03 xFIP, and 3.56 SIERA. His xFIP is so much higher than the other metrics because his HR/9 as a reliever was 0.41. That would likely jump up a bit in a full season in long relief, but everything suggests he'd still be very good in that role. That being said, I'm not sure the Brewers will bring him back.

He's in his final year of arbitration and so he's probably due a decent sized raise. That will be somewhat mitigated by his poor production and reduced role mid-season though. Last time the two sides agreed to a $3.3 million contract. I think this time around he'd probably make around $4 million.

With Jimmy Nelson and Mike Fiers competing for the 5th rotation spot, it's possible one of them ends up in the bullpen (or AAA). The Brewers might feel it's more prudent to hand the long relief role to Nelson and spend that $4 million elsewhere.

I suppose it's possible the Brewers could look to trade Estrada. There might be a team in a pitcher's park willing to buy low on him as their fifth starter. I don't think they'd get much of value in return unless they paid most of his salary or included other pieces though. If they do trade Estrada I think it will be to control where he goes. Or in other words, they'd trade him to make sure he stays out of the division.

If it was me, I'd want to bring Estrada back. He was excellent in relief and he would help keep the Brewers starting pitching depth pretty deep. That's incredibly important, especially if the Brewers look to trade one of their starting pitchers.