Preliminary look at the Brewers 2015 roster and payroll

We've spent all week looking at who might leave via free agency. Now let's look at who might stay and how that impacts who might get brought in.

Share All sharing options for: Preliminary look at the Brewers 2015 roster and payroll

Today we're going to take our first look at next year's Brewers roster and the position that the payroll will be in. But in order to do that first we needed to see who might be departing through free agency.

I'm going to take a step-by-step approach to viewing the roster and payroll. It's a lot to take in so I think doing it this way makes things clearer. First let's start with the roster composed of only guaranteed contracts:

Obviously that looks pretty barren. It's supposed to. I did include some pre-arb players, but I left out all the players who can become uninhibited free agents, those with options, and those who are eligible for arbitration. I think we can safely assume several of those players will indeed return next year. Here is the roster including those players with options and who are arb-eligible:

By now I'm sure you've noticed the glaring hole at third base and the omission of a certain pitcher. The way I see it, Aramis Ramirez's option will be declined. I still believe the Brewers Plan A is to bring him back, but I can't be certain of that so I'm treating him like a free agent right now.

I believe the Brewers will want to see what they have in Mike Fiers and so he will win the 5th rotation spot. That kind of leaves Jimmy Nelson in limbo. He could start back in AAA or he could pitch out of the bullpen for the Brewers. I don't know where he'll end up.

I also left off Matt Clark, Elian Herrera, and Hector Gomez. I actually think there is a very good chance each one of them ends up on the opening day roster (barring any unforeseen events as always). So, let's see how the roster would look if the Brewers filled certain positions from with-in:

So with three open roster spots the payroll would be at $86.15 million.

There are a few things that must be noted. Marco Estrada, Brandon Kintzler, Gerardo Parra, and Martin Maldonado are all eligible for arbitration. As such, their exact salaries are not yet set. I'm guessing here as to what they might make. I tried to err on the side of caution and so I'm quite certain not one of those players will make more money than what I have listed. It's also entirely possible those players make less than my estimates.

Also, Matt Garza's contract includes $0.5 million in performance bonuses each year, but it also defers $2 million each year. So that $12.5 isn't exactly what the Brewers will owe him in the calender year.

At the very least, the payroll including all those specific players would almost certainly not exceed the $86.15 million figure I arrived at.

Assuming that's accurate, that leaves approximately $17 million to fill out first base, third base, and a relief spot before reaching last year's opening payroll of $103 million. I know that seems like very little and you're not wrong. However I think they can exceed last year's payroll by a decent margin, which alleviates some concern.

One spot they could save money on is the final bullpen member (assuming Nelson is there). It's possible the Brewers could choose to fill from with-in. They have a number of candidates. Rob Wooten, Michael Blazek, and Ariel Pena are already on the 40-man roster. Pena and Blazek (Update: I was mistaken, Blazek has 1 option year remaining) are out of minor league options and will have to be included on the 25-man roster next year or removed from the 40-man roster via trade or outrighting.

Brooks Hall and David Goforth could be options as well. They pitched in AA this year, but making the leap from AA to MLB is not that uncommon for relievers. It's easier for them because they're only facing a handful of batters once a game.

One of the things Doug Melvin and his staff seem to be excellent at is picking up pitchers off the scrap heap. John Axford, Jim Henderson, Brandon Kintzler, Marco Estrada, Alfredo Figaro, Tom Gorzelanny, Zach Duke, Jeremy Jeffress, and in some ways Francisco Rodriguez are all recent examples of this. It's entirely possible Melvin finds a hidden gem again. There might be one in the system already that gets added to the 40-man roster prior to the Rule-5 draft.

Then there are the three pitchers returning from injury to consider. Jim Henderson, Tyler Thornburg, and Johnny Hellweg could all see time in the pen next year. It could be worthwhile to use a stopgap reliever until one ore more of these pitchers is ready. Admittedly, that seems an unlikely risk for the Brewers to take.

I happen to be a proponent of bringing back Zach Duke. I am worried it will take a 3 year deal, but I'm pretty confident his annual average value won't exceed $3 million. If they bring him back (or spend up to $3 million on any other reliever) that gives them a minimum of $14 million to fill out first and third bases.

Adam LaRoche Rumors: Brewers could pursue 1B if released by Nationals 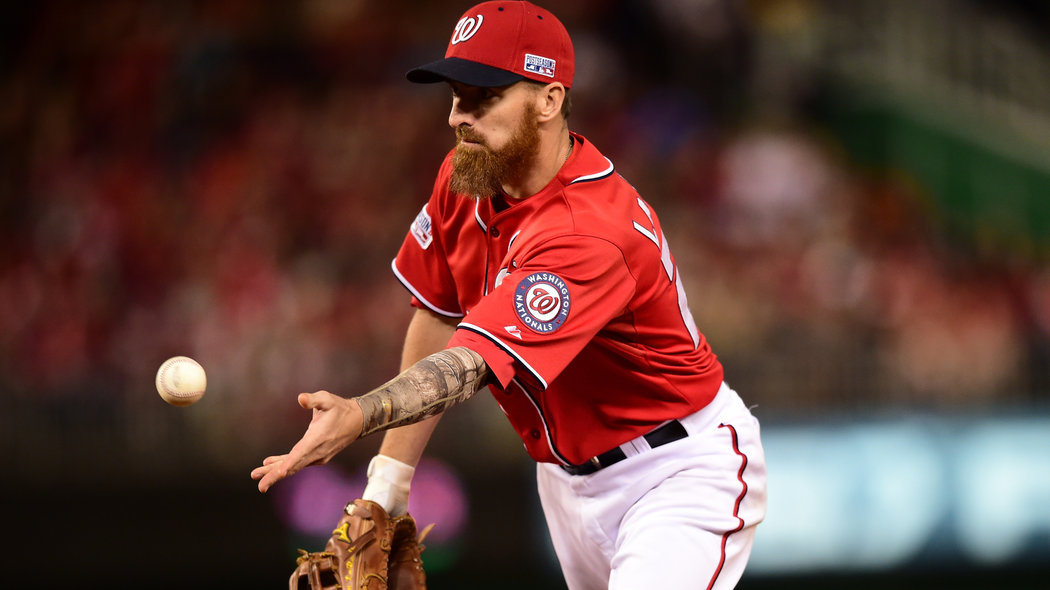 The Nationals are likely to buy out Adam LaRoche's option for 2015. If they do, the Brewers may jump on the 35-year-old first baseman.

Again, that doesn't seem like enough and that minimum figure almost certainly isn't. However if they bump that by another $6-$10 million I think that gets them there. This is part of why I think Aramis Ramirez is sure to return, either as a third baseman or first baseman.

It's often been noted how much his family means to him and how much they enjoy the Milwaukee area. At the tail end of his career I think guaranteed years and comfort mean more to him than pure dollars. Don't get me wrong, if someone were to significantly outbid the Brewers, I'm sure he would sign elsewhere. I just don't think that will happen.

Again, I'm just giving an opinion, but I think the Brewers and Aramis Ramirez end up agreeing on a 2 year deal. It also seems very probable that at least some of that money will be deferred and/or back-loaded. The most I see him getting is 2/26. They could pay him $10M in 2015 and $16M in 2016 with $6M deferred again (just as an example).

For the sake of argument let's say that happens. That leaves them with a minimum* of $4 million to find a first baseman (or third baseman if Ramirez is able and willing to play first) and probably a maximum of $14 million. (*When I say minimum, I think it's important to remember I've been using figures I expect are at the upper range of what players could get. That min could be closer to $7M for example than $4M which is actually a pretty big swing.) Obviously the minimum isn't going to get the job done, but that maximum will. They might even be able to back-load another deal with whomever they sign. Or perhaps they could defer more money.

This is one of the ways the Brewers have gotten around their small market/small revenue problem. The last three big signings the Brewers made (Aramis Ramirez, Kyle Lohse, Matt Garza) all included some deferred money. Also, Ryan Braun's $105 million extension includes a heavy amount of deferments. They have to be careful doing this though. You don't want to have to pay too much money in a season to a phantom. Take a look at the current deferments:

On thing to note: If the Brewers were required to pay Aramis Ramirez's $4 million buyout for next year, they would do it in 2 equal installments on December of 2015 and 2016.

Looking at the deferment plan the Brewers have is really interesting. I think it's no coincidence that the deferred payments are highest when the next wave of prospects can reasonably be expected to start arriving. That means the payroll will be lighter because a bunch of guys are making the league minimum. Even still, it's a scary thought to pay $5-7 million for players who are no longer on the team.

The Brewers seem to be in a tight situation as far as the payroll goes if they bring back all the players I think they might. As always there is some uncertainty in the bullpen and the bench but, ignoring payroll constraints, I think they are in a good position talent-wise as far as returning players go. It will take some doing, but I do believe they can afford to fill the infield corners which I view as the main concern.

Obviously it's way too early to lock in any of these players for 2015. The Brewers might decided Gerardo Parra and Marco Estrada are too expensive and trade or non-tender them. Perhaps the Brewers feel confident enough in Mike Fiers and Jimmy Nelson to trade one of the other starters. Maybe they pick up a couple of new relievers and send Nelson back to AAA. Perhaps they decided to bring in a totally new third baseman and let Aramis Ramirez go his merry way. Maybe they move Ryan Braun to first base and start Gerardo Parra in right.

A number of things could happen between now and April 6th (why the hell is the season starting so late next year). That's why this is just the preliminary look. It should just serve as a framework with which to view the coming off season.