One of the popular themes for this offseason has been the Brewers need for a RHH platoon partner for Adam Lind. I think that need is being overstated a tad, but it does exist. Midday Sunday I caught this tweet from the ever vigilant Jim Goulart. That tweet references an excerpt from this article by Nick Cafardo.

In that article Cafardo mentions that if the Red Sox decide to move Allen Craig there will be plenty of teams interested, perhaps including the Brewers. I'll reproduce that quote now:

Three evaluators told me that Craig will have a market if the Red Sox decide to deal him. The Marlins and Brewers have been interested. One evaluator told me there's no way Craig is done as a premier hitter at age 30, and that foot injuries derailed his season. The evaluator said the Red Sox should be careful on this one and stick to their original evaluation of him - a clutch, impact, professional bat when he's right.

The Brewers interest is described in the past tense: "have been interested." I often wonder if people that give these types of quotes don't realize they're being ambiguous or if it's by design. We have no way of knowing when the Brewers showed interest nor whether it was serious or simply due diligence. For discussion let us assume the Brewers are currently interested and said interest is serious.

Allen Craig would fill a need for the Brewers. He actually fills two needs. He would immediately become the best option for Adam Lind's platoon partner. He would also serve as 5th outfielder and insurance in case Ryan Braun's thumb experiences a set-back.

Craig has logged significant innings in right field and at first base, but perhaps the best thing about him is his right handed bat:

You'll notice his insane wRC+ from 2011-2012. You'll also notice it's much lower in 2013-2014. He doesn't draw walks so his OBP vs LHP is very dependent on his batting average. Alarmingly, his slugging numbers have dropped precipitously. In 2013 he was still solidly above average vs LHP but in 2014 he was below league average. That's rather concerning, but there might be an explanation.

In September of 2013 Allen Craig suffered an injury to his left foot. He was forced to the disabled list in late 2014 for another injury to the same foot. If the original injury never fully healed itself, and it's something he was dealing with all season, it could be to blame for Craig's poor performance. Were the Brewers to acquire him they'd have to hope that's the case. It's also possible this injury is something that will continue to nag him for an indeterminate amount of time.

If Allen Craig were to return to his prior offensive prowess he could be very valuable to the Brewers going forward. In the previous 4 seasons Craig has hit RHP nearly as well as LHP pitching:

Notice the walk rate vs RHP is better than vs LHP. The contrast is kind of surprising. Again we see a steep drop in production in 2014. It could be the injury, but Allen Craig isn't exactly young. He turns 31 in July. That suggests it's unlikely he's going to improve or return to his 2011-2012 prowess. But I don't believe it entirely explains his 2014 performance, either.

I didn't notice anything strikingly different in his plate discipline numbers that I think could explain his misfortune. His O-contact%, that's contact made from swings on pitches outside the strike zone, was the lowest of his career. But his O-swing%, that's swings outside the strike zone, was also the lowest of his career. That's generally a good thing.

Looking at his batted ball distribution reveals another alarming factor.

He's showing a pretty clear trend and it's not a pretty one. His 54.0 GB% was nearly 9 percentage points higher than any previous mark. He had the lowest FB% of his career. It is possible that this was all impacted by his foot injury. It is suspicious to see such a stark contrast to previous years. If it's a trend that continues to intensify though, he might be cooked.

Brewers 'listening' to offers for Gallardo and Lohse 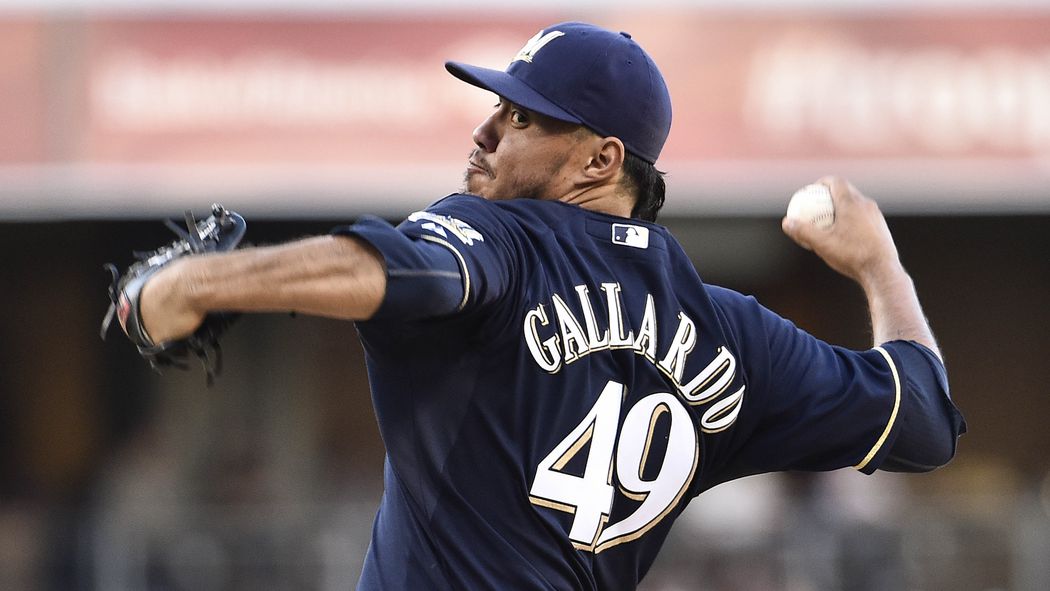 The Brewers don't seem likely to trade either of the two starters, but will seemingly be listening to offers in case something blows them away.

The Red Sox are said to be looking for starting pitchers. The Brewers have two on the last year of their contracts. A Yovani Gallardo or Kyle Lohse for Allen Craig trade would make some sense for both teams (this is just my speculation, I haven't heard anything about the Sox being interested in either pitcher). Red Sox get a good pitcher without giving up a big prospect package or a big multi-year contract. They also rid themselves of a potentially bad contract/player.

Even considering a declining skill set, there is some pretty reasonable upside with Craig and he fills a position of relative weakness for the Brewers. Namely first base. If he could return to being a 2 to 2.5 win player his contract would make him a worthwhile addition. However it's hard to expect that considering his age, recent injury history, and batted ball trends. The downside is owing a broken or platoon player $26.5 million over the next 4 years. It would basically be the Rickie Weeks contract all over again.

Trading one Gallardo or Lohse would free up enough money to allow the Brewers to pursue another mid-rotation starter. Were they to add Craig and a comparable starter to the one traded, they would potentially be greatly improved. However if they were unwilling or unable to find a replacement, the rotation depth and overall potential would take a significant hit.

If you ask me this trade is a non-starter. The Brewers could use an upgrade to the RHH side at first base. But Jonathan Lucroy is going to get some starts there which mitigates the need. In addition, the Brewers have Luis Jimenez and Jason Rogers as options. It's entirely possible Doug Melvin and the Brewers decide they need to shake things up a bit. However my money is on them making much smaller, more sensible moves.