Despite Haudricourt's obvious PR job article on Wednesday, this survey leaves me scratching my head

Share All sharing options for: Brewers send out fan survey with dubious questions

A little after 11 am cst on Tuesday an email popped into my inbox telling me the Brewers would love my feedback:

Dear Nicole, To help us deliver the best fan experience, we are asking you to complete a survey and tell us what you really think about Major League Baseball and the Milwaukee Brewers. With Spring Training now underway, this is a good time to offer your opinions about the sport, the team, and the baseball experience in Milwaukee. Your opinions and answers will remain strictly confidential -- and it will only take about eight minutes to complete.

Unfortunately for the Brewers, the questions were so hilarious I couldn't keep them to myself, so I decide that strict confidentiality didn't apply back to them.

One has to wonder about the reaction to this survey, as a full 24-hours after it was e-mailed to season-seat-holders (SSH), Journal-Sentinel Brewers beat writer Tom Haudricourt posted to his own blog with an explanation about the questions and contents of the survey.

Apologies in advance for the "screen-shots" - it's better than Microsoft Paint!

The survey starts with demographic info and then asked the level of my fandom. It wanted to know how important I consider them to my daily life during the regular season, how many days a week I get news on them from the internet and social media, what sources I get that news from, if I am a currently partial or full SSH, how many games I went to last year and how many I plan to attend this season and whom I normally attend games with.

From there, it asked if I thought the team was going in the right or wrong direction, my overall opinion of the team and if I expected them to do better or worse this season compared to last. Next it asked about my opinion of the off season roster changes and if I thought winning this season or long-term, year after year success was more important.

From here, let's move into some screen shots 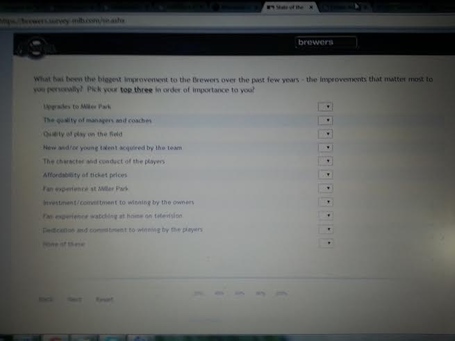 Initially, this next question didn't set off my radar, but it should have.

What has been the biggest disappointment or decline regarding the Brewers over the past FIVE YEARS? Pick your top three in order of importance to you? 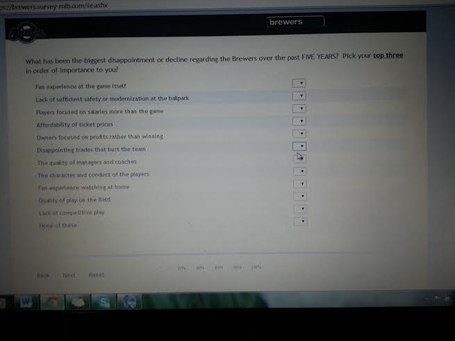 One of my options: The character and conduct of the players
This is a harbinger of questions to come. But moving on ...

At the time I first took the survey, this was the first photo I took and I thought it would be the only one (little did I know there was so much more hilarity to come). This question made me roll my eyes, laugh and generally wonder what the heck the purpose of the survey was. It also made me double-check the survey hadn't come from either the Cardinals or the Diamondbacks.

Other than talent, which of the following factors should play the biggest role in drafting/acquiring a player for the Brewers? Pick your top three in order. 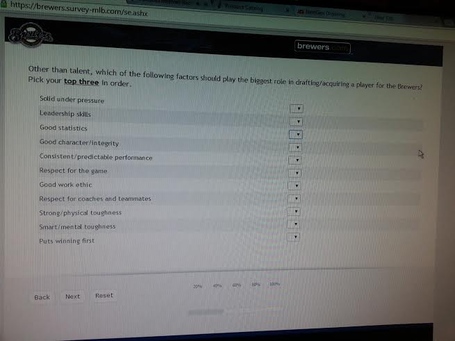 The second to last option on that list? Respect for the game

This is a question that's asking the fans of an MLB team what they would like the team to consider OTHER THAN TALENT when acquiring talent. For the most part, there isn't much else I'd like them to consider, but looking at that list, I'd hope that the player's statistics goes without saying (or asking). If the Brewers aren't considering those or somehow consider those outside the realm of "talent," we've got bigger problems.

But even more nebulous are the rest of the items on this list. The Brewers would like to know what other completely undefinable and unquantifiable things their fans would like them to consider when looking to acquire new players. "Grit," "heart," "veteran leadership" and "good clubhouse guy" may as well all be on this list.

The next question asked me to pick two 2014 Brewers who are my favorite. Bob Uecker was on the list.

The next questions were about fan experience at Miller Park. I was to rank my view of it's favorability, choose from a list of possible improvements (I chose better connectivity/WIFI and faster exit from the parking lots) and choose ways for the Brewers to make me feel more valued as a fan (no, guys, the answer is not MORE bobblehead days).

And again we get more interesting. The survey now purports to be giving me blogger statements.

Which sports blogger statement about the Brewers is MOST persuasive that the Brewers will have a good season in 2014? 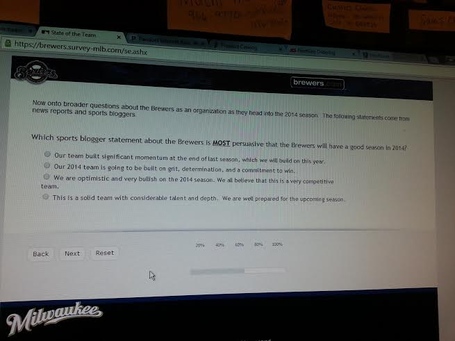 I'd love to hear feedback from anyone that remember seeing anything remotely approaching those sentences on any local blog recently. Do any of the ones we all read even call the team "we"? I do love that now that it's supposedly bloggers talking, we can go ahead and use "grit," though.

The next question is for the "trolling Rickie Weeks" fans out there.

Which sports blogger statement makes you feel most confident about the Brewers this year? 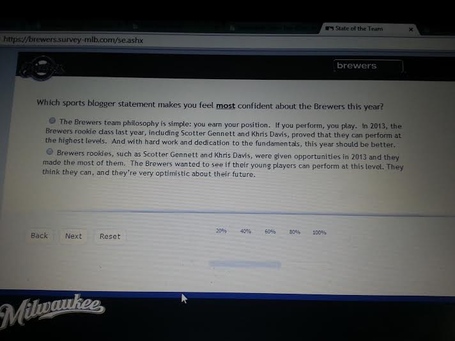 Next we move on to the "temper expectations, don't expect too much out of us" question 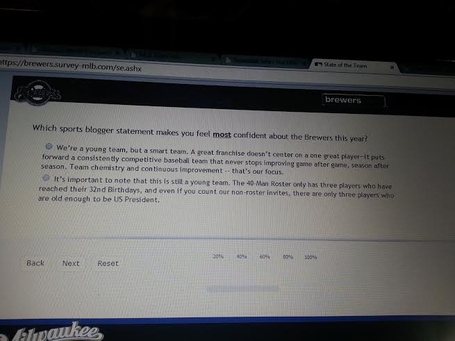 And now we get to the money questions ...

Briefly, we’d like to get your opinion of Ryan Braun...

Overall, do you have an ... opinion of Ryan Braun? 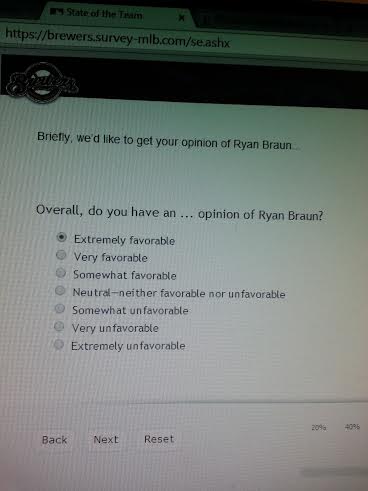 In some respects, I understand the organization asking their fans about Braun - as far as I know, they had not yet done so. Getting the gauge of their season seat-holding fanbase on this isn't the worst idea.

But I also think that two days before Spring Training games and about a month before Opening Day might be a little late to be gathering and analyzing this data. If it comes back overwhelmingly different than their expected outcome, it'll be very late and very obvious when they have to adjust PR, marketing and advertising campaigns.

This next question is the most bluntly stated of the Braun questions - do you think he needs to keep apologizing or can he move on are the basic choices here. 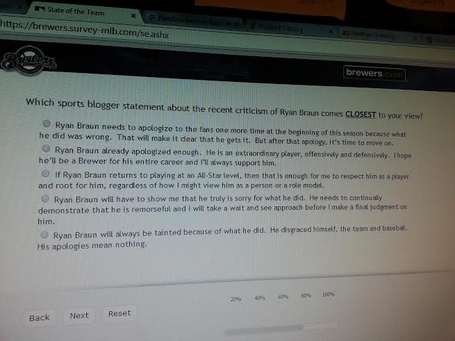 I do wish that I could have chosen the "already apologized enough" option without having to also label him as defensively gifted ...

This next question is incredibly interesting because I would absolutely swear it wasn't on the survey when I initially took it. Based on the pictures I sent out and the eyebrows I raised, you can be sure this question would have been captured and distributed had I seen it. 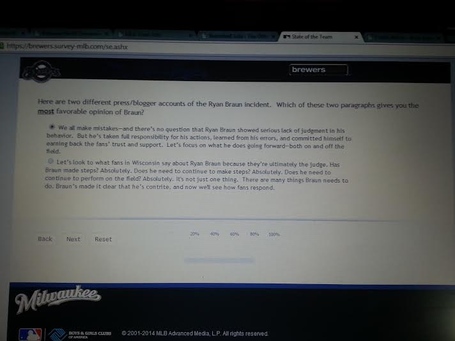 I happened to be in my inbox when the email arrived and took the survey pretty much immediately upon receiving it, which means it was amended at some point between about 11:30 am on Tuesday and Wednesday evening. Did the receive initial survey feedback that showed Braun responses were skewed one way or another and felt they needed a further clarifying question? Do you feel this question further clarifies anyone's stance on Braun?

These next two questions just made me laugh because I wonder about what kind of data one learns from the response to this. Does Mark A need a lot of validation?

On scale of 1-7 (Totally agree to totally disagree) how do you respond to:

As a stickler for grammar, etc ... this one bugs me because it's not English ...

In general, do you feel you the Milwaukee Brewers reach out to you as a fan to provide information about the team, upcoming games, special fan events, etc.?

And that's really about it. From here there's some more demographic info and questions about where I get my Brewers news.