It's back! I'm with Wily on this one.

W: Who cares?
L: One of the Athletics

For one Ryan Braun at-bat in the first inning, it felt a bit like 2013. Not sure how I feel about that.

But Marco Estrada diffused the slightly uncomfortable deja vu with something of a shaky start (as shaky spring starts go), walking the first two batters and surrendering a 2 RBI double to Jed Lowrie in the bottom of the frame.

The Brewers broke the tie quickly in the top of 2nd with a wind-aided homer from platoon-disadvantaged Juan Francisco (off LHP Tommy Milone), and after Estrada settled in for a clean 2nd inning, extended the lead with a two-out RBI single from Khris Davis to make it a 4-2 game. 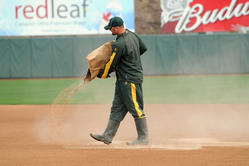 The middle innings featured the first broadcast mention of Hank the Dog and corresponding dog humor, two scoreless innings from Wily Peralta, a second solo homerun from Juan Francisco, and a diving catch in CF by some mustached guy named Kevin Mattison. If you had no idea he played for the Milwaukee Brewers, you are not alone (he was picked in the minor league portion of the rule 5 draft -- and more interestingly, his twitter handle is @stachemaster4.).

Good things continued to happen off the bat of Juan Francisco: a tailor-made double play ball scooted under the glove of Eric Sogard with the bases loaded in the top of the 5th, leading to two more Brewers runs, extending the lead to 8-2.

The Brewers got more scoreless work from Zach Duke, Will Smith (2 innings), and Donovan Hand. Jean Segura had a double, a bunt single and a walk in the leadoff spot, Rickie Weeks added two singles, and Khris Davis singled twice, adding a stolen base. Mitch Haniger, our #4 Brewers prospect here at Brew Crew Ball, cracked a solo homer in the top of the 9th.

When all was said and done, the Brewers finished off the win with a convincing 11-3 final tally.

Breaking BSOHL News: My inside source in Maryvale informs me that both Lyle Overbay and Ron Roenicke look "skinny." Post theories in the comments.

It was an excellent result on the scoreboard for the Brewers, but even excellenter for those of us who have spent the last four months with our crystal-snotted noses buried in scarves, patiently tolerating lowest-common-denominator offseason PED bickering and unenthusiastic farm system commentary with a yearning eye on the calendar, eagerly anticipating spring and the game which inspires me to write prolonged, unnecessarily fanciful sentences.

Baseball games are back. It's been long awaited.

You can listen to Yovani Gallardo take on the Giants on WTMJ tomorrow afternoon at 2:05 CST.