Yovani Gallardo takes on Chris Sale as the Brewers return to TV.

Yesterday's pair of road losses dropped the Brewers to 6-7 on the spring, 4.5 games back of the Indians for the Cactus League lead.

They'll look to gain some ground at 3:05 Central time today when they send Yovani Gallardo (1.93 ERA this spring, 4.18/3.89 ERA/FIP in 2013) to the mound to take on the White Sox. Gallardo pitched 2.2 innings against the A's in his last appearance on Wednesday, allowing a run on three hits with a walk and four strikeouts. The Brewers are likely to try to get four innings out of him today. 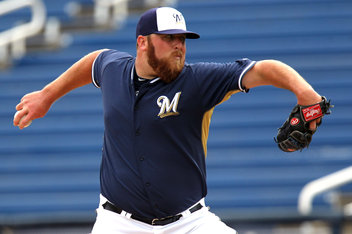 Olmsted, a former member of the 40-man roster, is the first pitcher the Brewers have cut this spring.

The strikeouts last time out were a good sign for Gallardo, who has five K's in 4.2 innings this spring after striking out a career-low 7.2 batters per nine innings last season. The downside is that Gallardo wasn't able to finish the third inning without running into issues with his pitch count. Unfortunately, that's a familiar problem for him.

Gallardo has never faced the White Sox during the regular season, and no current members of the team have faced him before. 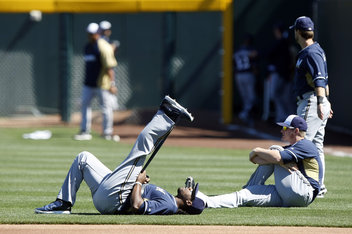 If you missed it, check out Kyle's Monday morning roundup of all things Brewers.

Sale was the #13 overall pick in the 2010 draft, made his MLB debut later that same season and the White Sox have been riding him pretty hard ever since. They used him as a reliever in 2011, moved him to the rotation in 2012 and he's made 59 starts since, including 214.1 innings and an AL-leading four complete games as a 24-year-old last season. He throws a 92-94 mph fastball but relies heavily on his slider (nearly 30% of all pitches) and a changeup.

Sale didn't face the Brewers during the regular season in 2013, but did pitch eight shutout innings against them in a start in 2012. No current Brewers have faced him before.

Try not to be surprised when today is another great day for baseball. Expect a game-time temperature around 75 to climb into the 80s during the afternoon. The wind is expected to swirl a bit, though, starting the game blowing from the east (in from right) but ending the game out of the west-by-southwest (out to center).