Remember .500? The Brewers haven't been there since Saturday. They could get back there today.

They'll attempt to extend their two-game winning streak today with Tyler Thornburg (5.00 ERA this spring, 2.03/3.11 ERA/FIP in 2013) on the mound. Thornburg received an extra day of rest after his start on Sunday, when he held the Cubs to two runs on three hits over four innings. He walked none and struck out three in that outing. He has yet to issue a walk in nine innings this spring. 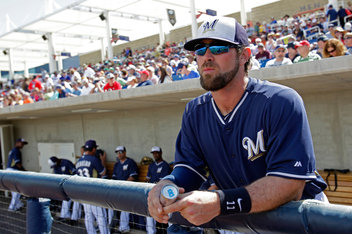 Quick lessons this week, including the Opening Day starter, a mysterious injury, and the first tracking poll of the season.

The Brewers are pretty close to needing to make a decision on Thornburg's 2014 role. With five starters more or less locked into the Opening Day rotation, it's going to become increasingly difficult to find opportunities for him to start Cactus League games. If the Brewers want to keep him stretched out, they'll need to send him down to the minors. Otherwise, it might be time to start getting him used to life as a reliever. This week's BCB Tracking Poll showed that 55% of voters would prefer he start in the minors.

Thornburg made two relief appearances against the Reds last August. One of them was a perfect inning and the other one was a disaster, as he walked five batters and allowed two runs in just 1.2 innings of work. No current Reds have faced him more than twice.

Bailey allowed a home run on Monday and has given up two in nine innings this spring. The long ball is one of the more significant weaknesses in his game, as he's allowed about one per nine innings in his seven MLB seasons. Some of that can, of course, be attributed to his home park. He throws a mid-90's fastball with a slider, splitter and curve.

Bailey made five starts against the Brewers in 2013, posting a 4.54 ERA over 33.2 innings. Nine current Brewers have faced him ten times or more:

Khris Davis is also 4-for-8 against him with a walk and two home runs.

As of this writing today's lineup has not been posted. If you've seen it, please drop it in the comments.

Temperatures were a little cooler in Phoenix this morning, but it'll still be nice and warm by game time. Expect a temperature around 78 at first pitch to climb into the 80's as the afternoon moves along.