Today is St. Patrick's Day so, per tradition, baseball will be played in green uniforms.

The Brewers will take the mound in green at 3:05 Central time today with Kyle Lohse (3.60 ERA this spring, 3.35/4.08 ERA/FIP in 2013) on the mound. Lohse pitched in a minor league game the last time his rotation spot was due up, so this is his first MLB game since March 6. He pitched three innings in that one, allowing two runs on three hits with no walks and no strikeouts.

As a longtime member of the Twins, Lohse has 23 career appearances against the White Sox. The last one, however, came in 2006. Two current members of the team have faced him ten times or more: 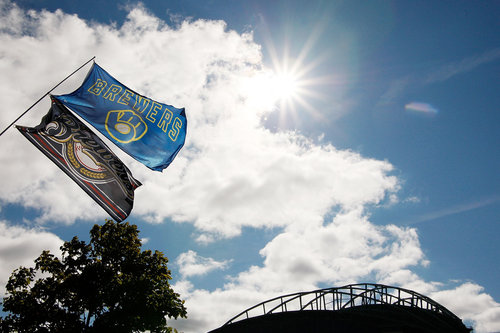 We're counting down to Opening Day and more in today's roundup of all things Brewers.

He'll face 30-year-old righty Felipe Paulino (9.72 ERA this spring, did not pitch in majors in 2013), in camp with the White Sox as a reclamation project. Paulino hasn't pitched in the majors since June 6, 2012 and has undergone both Tommy John and shoulder surgery since then. He faced the Giants on Wednesday and allowed two runs on five hits over 3.2 innings.

The White Sox would be Paulino's fourth MLB team, as he's been a member of the Astros, Rockies and Royals since 2010. He has a career 4.93 ERA over 93 outings and has walked over three and a half batters per nine innings over that time. He throws a mid-90's fastball but relies heavily on a slider while also mixing in the occasional curve and changeup.

Paulino has a career 7.52 ERA in seven appearances against the Brewers, but hasn't faced them in a regular season game since 2011. Two current Brewers have faced him ten times or more:

The weather in Phoenix remains spectacular for baseball, although the wind has picked up a bit today. Expect a game-time temperature around 79 with winds blowing out around 10 mph.