The Brewers greet an old friend today in their fourth road contest of the spring.

After a deluge of rain yesterday, the skies have cleared up in Scottsdale for the Brewers' second trip to Salt River Fields in as many days.

Today they're out there to face Jorge De La Rosa (3.49 ERA, 3.76 FIP) and the Rockies at 2:05 Central time. JDLR has long been plagued by injury issues, but made 30 starts last season for the first time since 2009. He's on the second and final option year of a two-year, $21.5 million contract he signed before the 2011 season.

De La Rosa struck out just six batters per nine innings last season, and Michael Hurcomb of CBSSports.com says it's because he learned to pitch to contact instead of relying on K's. As a result his walk rate also dropped a bit, coming down from 4.2 per nine innings for his career to 3.3 last season. He throws a low 90's fastball but relies heavily on his changeup and also uses a slider and curve.

De La Rosa was a member of the Brewers from 2004-06, and more recently he faced them as a member of the Rockies in the second game of the season in 2013. He pitched 4.1 innings in that game and allowed four runs on five hits and three walks, and Ryan Braun homered off of him. Two current Brewers have faced him ten times or more, and both would probably be excited to see him again: 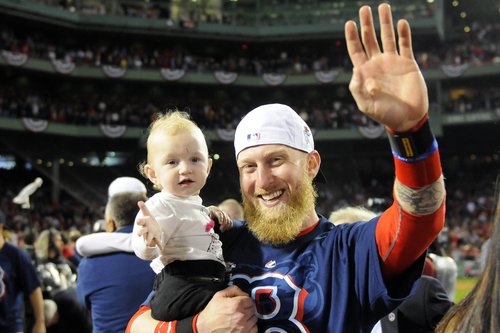 The Brewers continue to monitor other options for first base, and this isn't a bad one.

Meanwhile, the big story from today is likely to be the Brewers debut of Matt Garza (3.82 ERA, 3.88 FIP in 2013), the Brewers' most notable acquisition of the offseason. Garza finished the 2013 season with 13 starts with the Rangers after spending two and a half years with the Cubs. He's a Brewer for the next four years, where they're hopeful he'll be healthier than he's been in recent years.

Garza has pitched just 259 innings in 42 starts over the last two seasons, losing roughly half a year to injury. What's lost in that fact, though, is that he made 30 or more starts each season from 2008-2011. His velocity has also still looked good in recent years, with his fastball remaining in the 92-94 range. He pairs that heat with one of baseball's best sliders, and a curve and changeup.

Garza did not face the Rockies during the regular season last year, and hasn't seen them since 2011. Three current Rockies have faced him ten times or more:

As of this writing the Brewers haven't posted a lineup for today's game. If you've seen it, please drop it in the comments.

The weather shouldn't be a factor in today's contest. Expect a game time temperature in the mid-60's with light winds.